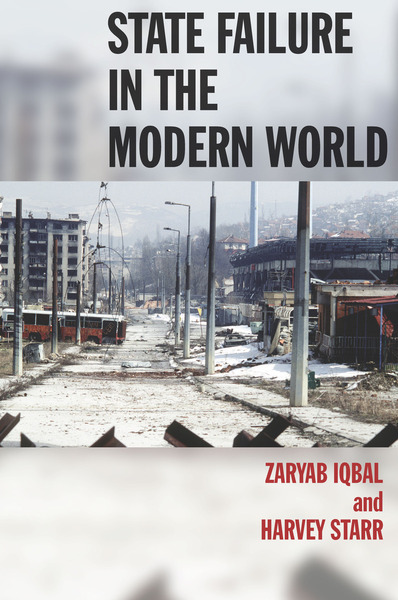 The first chapter introduces the book and provides an overview of its contents. In particular, it outlines the book's general argument: that state failure is associated with a range of factors pertaining to domestic politics as well as international influences, and that it is a phenomenon that is tremendously important to global security in the current international system. This chapter situates the book amid the burgeoning literature on the importance of domestic political and social phenomena for international relations and foreign policy.

This chapter addresses definitional and conceptual issues in the study of state failure, and clarifies the concept for the purposes of the analyses in the book. There is confusion over the exact meaning and nature of state failure in much of the extant literature, due to weaknesses in conceptualization and measurement. The lack of definitional clarity, in turn, has lead to problems in research design, and consequently in the meaning of the findings generated by that research. This chapter reviews various measures of state failure used in academic and policy literatures, outlines the problems of conceptualization and measurement in the study of state collapse, and introduces a definition and measure that solves these problems. The working definition of state failure used in this book focuses on the complete collapse of state authority, which helps distinguish collapsed states from states that are unstable, weak, or fragile.

3 Why do States Collapse?: Determinants of State Failure
chapter abstract

Chapter three sets forth the book's theoretical framework regarding the causes of state failure, and empirically analyzes the social, political, and institutional correlates of state collapse since 1946. State failure is determined by key social and political factors both at the domestic and international level. Specifically, this analysis focuses on the influence of the type of governing institutions, states' involvement in civil and international armed conflict, various levels of domestic political turmoil, and economic development on the likelihood of state failure. The findings reveal that the risk of state failure is closely associated with armed conflict, domestic strife, and national income.

This chapter assesses the determinants of the length of time for which states remain failed after experiencing a collapse of their central government. While a majority of failed states during the time period under study recovered from collapse within a year, some remained in a state of failure for five or six years, and a few were unable to reinstate governing institutions for up to fifteen years. In addition to the correlates included in the model of the determinants of state failure in Chapter Three, this analysis also examines the effect of the nature of pre-failure governing institutions in evaluating the duration of state failure.

Chapter Five examines the question of why some states that fail achieve a lasting recovery, while others experience a recurrence of failure, and focuses on four specific cases of recurrent state failure: Afghanistan, the Democratic Republic of the Congo, Ethiopia, and the Ivory Coast. A series of four comparative case studies is conducted, comparing each of these four states to similar states that experience only a single failure during the same time period. This comparison adopts a similar-systems approach, comparing states that are most similar to each other on a number of relevant dimensions. The motivation behind this choice of research design is that if similar states were able to avoid recurrent collapse, why did these four states fall prey to a second collapse? The use of comparative case analyses in this chapter complements the systematic quantitative analyses of earlier chapters.

This chapter assesses the negative effects of state collapse, with particular attention to the spatial diffusion of those consequences. The instability, unrest, and civil war that increase the hazard of state collapse are not limited to the failed/collapsed state; states neighboring – or located within close distance of – a failed state are also likely to experience subsequently higher levels of political instability, unrest, civil war and interstate war. This analysis also evaluates the likelihood of state failure itself diffusing to other states. The findings indicate that the more "minor" possible consequences of state failure – political unrest and instability — spread to a lesser degree than more intense forms of violence – civil and interstate war. At the same time, state failure itself does not seem to be regionally contagious.

This penultimate chapter discusses the policy implications of the book's analyses, both in terms of preventing state failure and as they relate to the management and recovery of collapsed states. The findings of these analyses are used to survey the set of policy recommendations extant in the scholarly and policy literatures, and to propose the most promising avenues of policy choice and implementation –especially in mitigating diffusion effects and in directing attention to those states with the greatest hazard of collapse.

This concluding chapter revisits the importance of studying state failure and the place of this subject in international politics and security studies. We also identify key directions for future research on state failure. It offers some final words on the significance of appropriate definition and measurement in the study of state failure, the key role of intervention in preventing and managing state collapse, and importance of the forces of globalization in understanding state failure.