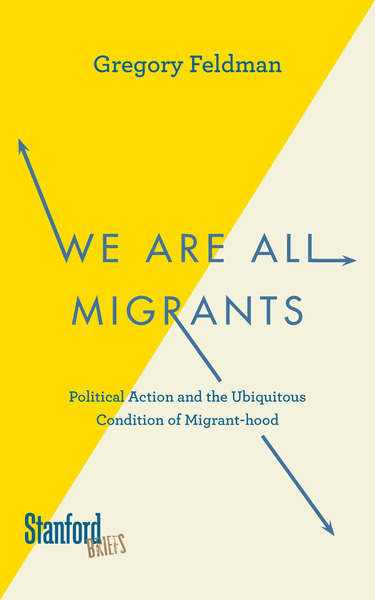 The book argues 1) that the line between the "citizen" and the "migrant" dissipates under close inspection as both subjects are effectively atomized and consequently disempowered, regardless of their relationship to the state; and 2) that to end the "condition of migrant-hood", people must constitute themselves in sovereign spaces where they appear as particular speaking subjects rather than as abstract citizens or animalized laborers. Along with scholarly literature, We are All Migrants examines this issue in reference to "foundational texts": i.e. books that have been continually re-read and that underpin the shifting foci of cutting edge research. In particular, it draws on the works of Homer, Aristotle, Marx, Tocqueville, Beckett, Coetzee, Levi, Agamben, Foucault, and Arendt.

Part I: Atomization: The Ubiquitous Condition of Migrant-hood
chapter abstract

The first of the book's three sections examines the modern condition of migrant-hood with respect to politics, economics, and society. It argues that this condition emerges because entry into modern mass society requires the denial of the particular speaking subject, regardless of whether one inhabits the status of "migrant" and "citizen".

The second section argues that the emphasis on "connections" in today's neoliberal world does not overcome the condition of migrant-hood, but rather exacerbates it. This situation has arisen because the modes in which we are connected – and seen most fully in educated laboring practices supported by large-scale IT systems – still deny the particular speaking subject because they draw upon the laborer's faculty of cognition as opposed to the faculty of thinking. The former reaches certainty through abstract logic, while the latter searches for meaning in the messy, empirical world. People do not distinguish themselves as particular subjects through their cognitive capacities and so atomization persists. Instead, they can only appear as particular speaking subjects when they try to persuade others of what they think ethically about the world around them.

Part III: Action: The Presence of Politics and the Absence of Migrant-hood
chapter abstract

The third section argues that to overcome the condition of migrant-hood people must be empowered to constitute their own sovereign spaces in which they both disclose themselves as particular speaking subjects to each other while deliberating on how they should inhabit the same space. It is through thinking, judging, and persuading that people appear as their particular selves in the very act of constituting sovereign space between them.