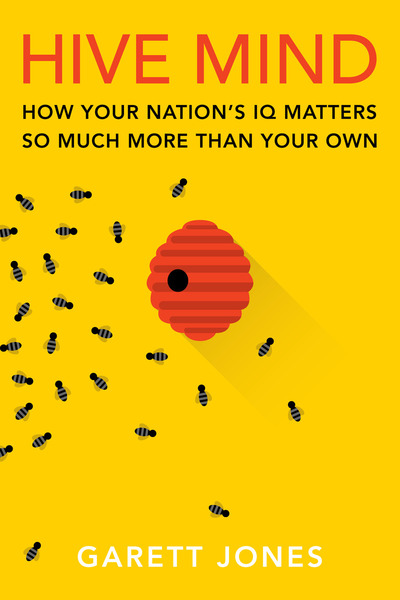 The chapter offers a rapid overview of modern IQ research, drawing heavily on recent textbooks published by Oxford and Cambridge University presses. The most important fact about IQ is that skills predict skills: as a practical matter, all mental abilities that a typical person thinks about as parts of "intelligence" are at least weakly positively correlated. So people with higher math scores tend to have higher verbal scores and are usually faster at solving wooden block puzzles. IQ also predicts wages and worker skill, as labor economists and human resource professors routinely find. But social intelligence, while a subject of popular discussion, is a weaker predictor of typical job outcomes than IQ.

Can national average IQ scores really be compared across countries the way that math and science tests routinely are? Is test bias too much of a problem to make the scores useful? Psychologists have debated the value of national average IQ estimates, but the result of the debate is a surprising consensus: outwardly fair tests appear to document lower average scores in the world's poorest regions, though scholars debate the precise magnitude. And while test bias can't be entirely ruled out, the fact that nations with lower average IQ scores also tend to perform poorly on math, science, and reading tests is additional evidence that broad-based mental skills currently differ across countries. East Asia's high average scores are also discussed.

IQ scores have risen over the course of the past century in the rich countries, a finding known as the Flynn Effect, after the philosopher who documented the regularity. This is the key inarguable piece of evidence that IQ is influenced by the environment. But the Flynn Effect raises questions: Are there practical policies that can raise IQ, or are the channels for raising IQ still a mystery? Is the Flynn effect a real rise in broad mental abilities, or is it just a rise in narrow test-taking ability? The chapter surveys the empirical evidence, which ultimately is quite ambiguous. If IQ matters more for nations than for individuals, then more research into the Flynn Effect is needed.

4 Will the Intelligent Inherit the Earth?
chapter abstract

Psychologists and economists have both found that higher IQ predicts more patience. Economic theory predicts that nations with more patient citizens will tend to have higher savings rates, and if capital can freely move across borders, ultimately the most patient nations will own all of the world's assets, with the less patient nations holding only debts to be repaid. The chapter looks at cross-country evidence testing these claims.

6 Patience and Cooperation as Ingredients for Good Politics
chapter abstract

The Nobel-winning Coase Theorem concept provides a link between the experimental results of the previous chapter and the world of politics. Politics is a world of negotiation. If smarter groups are more cooperative, better at finding win-win outcomes, then we can expect nations with higher test scores to, on average, have political systems that encourage people to grow the economic pie rather than fight for the biggest share. The Nobel-winning theory of "time inconsistency" shows how patience can help politicians commit to good long-run policies even when they are tempted in the short run as well. And cross-country evidence shows that even if we know a nation's level of income and a variety of other factors, a nation's average test scores predict better, less corrupt institutions.

7 Informed Voters and the Question of Epistocracy
chapter abstract

Toxicology researchers have found that better-educated people are more likely to agree with toxicologists that when it comes to toxic chemicals "the danger is in the dose." Bryan Caplan has found that better-educated citizens tend to think like economists, favoring modestly more-market-oriented policies. And Caplan's work with Miller finds that IQ itself helps predict pro-market attitudes. Together with some limited evidence that higher IQ individuals are more socially liberal, this suggests that nations with higher-IQ citizens may be more likely to be socially liberal and more laissez-faire in their economic views. The philosophical debate over "epistocracy"—rule by the informed—is also discussed.

Many production processes are fragile, such that one small error along the way can destroy the product's value. Computer chip production is an obvious example, while corporate megamergers are a less obvious example. Michael Kremer's O-Ring Theory shows how in such settings, high-skilled workers will tend to wind up sorted into highly productive firms while less-skilled workers will sort together into much less productive firms. Kremer's theory shows how small skill differences can cause big differences in productivity. Empirical evidence that productive workers help to make their peers more productive is also surveyed, a reminder that small individual productivity differences can have bigger overall effects by example to others. The psychology and management literature on team IQ and team productivity is also surveyed.

Drawing on the author's own economic model, the chapter begins by showing how to reconcile the O-ring prediction that small differences in group skill should cause massive changes in wages within a country with the real-world fact that small differences in group skill only predict small differences in wages within a country. From there, the literature on the large economic benefits and small, perhaps negligible economic costs of lower-skilled immigration are surveyed. The chapter closes by noting the tension between this chapter's claim that lower-skilled immigration has small economic costs and the evidence of the previous chapters that higher-scoring citizens are likely to improve government quality.

The chapter begins with a poem summarizing the book's argument. It then briefly discusses the modestly suggestive evidence that the highest-scoring 5 percent of a nation's citizens might have a disproportionate influence on the nation's economic and institutional outcomes; this is clearly an area in which further research would have high returns. And it closes with a call to search for a global Flynn Cycle, in which better nutrition and schooling raises IQ, which raises productivity, which in turn raises health and schooling quality. With our current knowledge, a Flynn Cycle may be possible, it may be impossible, but it's important to find out which is the truth.