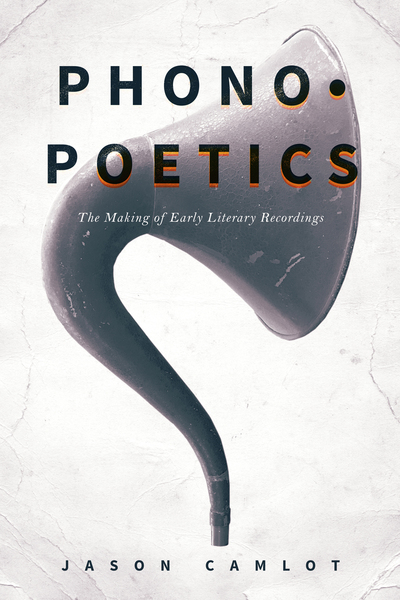 The introduction explores the strange sonic and material qualities of early sound recordings and outlines a methodology for the critical study of early spoken recordings as literary artifacts. It defines concepts that are at the core of the book, including the meaning of "literary recording", "sound", "signal", "audiotextual genres" and "sound media formats." In outlining a sound-based approach to literary studies, and in considering the synergies between textual criticism and literary sound recordings, it provides a schema for the pursuit of audiotextual criticism, that is, the formal and historical study of literary sound recordings.

1 The Voice of the Phonograph
chapter abstract

Chapter 1 analyzes the early promotional discourse surrounding the phonograph as a medium of natural fidelity and then situates the idea of the phonograph as a "pure voice" medium within the context of popular recitation anthologies in order to identify key elocutionary preconceptions that informed the vocal performances heard in early spoken recordings. In revealing the affinities that existed between late Victorian short spoken recordings and the brief texts meant for speaking aloud that were collected in nineteenth-century recitation anthologies, this opening chapter explains the preconceived notions about the phonograph as a new media technology and the significance of sound recording for the performance of literary texts, in particular.

Chapter 2 focuses on the development and production of the earliest sound recordings drawn from the novels of Charles Dickens. The Dickens recordings of Bransby Williams and William Sterling Battis stand as the earliest fiction-based audio adaptations produced specifically for pedagogical application, and represent an interesting bridge between earlier conceptions of the talking record as a novel form of popular entertainment and the later, pedagogically motivated category of the literary recording. To shed light on the historical transition from "talking record" to "literary recording" and the emergence of what we now call educational technology, this chapter examines the particular kinds of literary adaptation in early recordings produced specifically for teaching literature in the classroom.

Chapter 3 tells the story of the multiple recordings made between 1890 and 1920, both by the poet himself and by actors and elocutionists, of Tennyson's poem "The Charge of The Light Brigade." It analyzes the kinds of performance and genre that informed the production of these recordings and locates the speech sounds heard on them in debates of the period about elocution and verse speaking. An account of late Victorian methods of "dramatic" interpretation as elaborated by Samuel Silas Curry in Imagination and Dramatic Instinct opens into a longer genealogy of oral interpretation, and considers the import of New Criticism as a method of literary interpretation that worked to silence oral performance in the classroom. The close listening in this chapter also explores the potential of digital speech analysis tools to help us to fix and visualize elocutionary, prosodic features of these recordings of "Charge."

Chapter 4 offers a series of interpretive takes on T. S. Eliot's 1930s electrically recorded voice experiments in reading his poem The Waste Land aloud. It traces Eliot's attempt to invent a way to read modernist poetry. Explaining the production context of the 1933 recordings, the chapter situates Eliot's audible reading experiments within contemporary debates surrounding the English verse-speaking movement, and Eliot's work for the BBC. Finally, it provides a close-listening analysis of Eliot's reading experiments with duration and amplitude, as well as a series of nonsemantic phrasing and intonation techniques, and especially the use of monotone in reading. Eliot's method of reading is interpreted as a performance of the abstract conception of "voice" that functions as an organizing principle in New Critical discourse. Eliot's recorded readings are heard to sound an organizing method of incantation that evokes the possibility of an overarching oracular or otherworldly voice.

The Conclusion to Phonopoetics explores conceptions of voice preservation and models of the voice archive. It takes early ideas of the audible archival artifact (the sound recording) and the event-oriented scenario of its use as useful points of departure for a historically motivated theorization of the voice recording and voice archive at the present time. Specifically, it considers the impact of digital media technologies on the status of the record and its archive. The Conclusion mediates on how the analogue artifact of the sound archive has shaped our ideas and expectations about what a digital repository should be, and reflects on the status of the artifact of study as we move increasingly from the study of material media artifacts to virtual instantiations of the signals those media may once have held, in the form of digital media files.