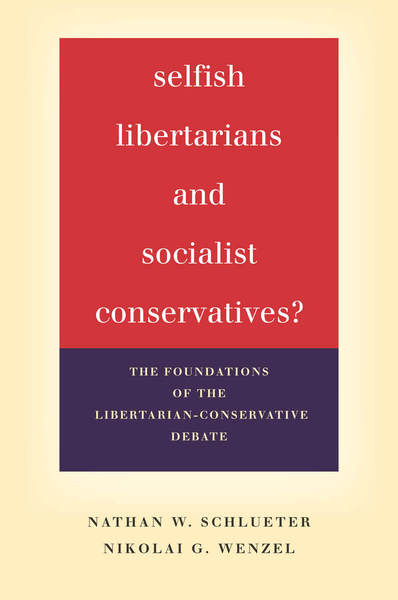 This chapter, written by Schlueter and Wenzel together, begins by providing historical context for the libertarian–conservative debate in general, and for this book in particular. It also highlights the special quality of this book: Although there are books on libertarianism and books on conservatism, there are no books in which a libertarian and conservative directly engage one another in a serious way. The authors also outline six areas of agreement: ideas have consequences; modern liberalism (or progressivism) does not provide a viable public philosophy; the modern administrative state is unconstitutional and unjust; the basic moral equality of persons; and the necessity of moral virtue for good government. The Introduction then gives a basic outline and summary of each chapter of the book and concludes with suggestions for further reading.

One: What Is Conservatism?
chapter abstract

Schlueter begins by arguing that conservatism in general is bound up with historical particularity, and he specifies that the conservatism he will be defending is American conservatism, which is rooted in an attachment to the principles of the American founding. But although American conservatism is rooted in historical particularity, he argues, it is uniquely open to the claims of nature and reason. The result is an "equilibrium of liberty" in which reason, tradition, and liberty hold one another in balance. Ultimately, American conservatism is a form of classical liberalism that Schlueter calls natural law liberalism. Natural law liberalism shares most of the commitments of classical liberals like Edmund Burke and Adam Smith to limited constitutional government but draws from the best of the ancient, medieval, and modern traditions of thought to ground those commitments.

Two: What Is Libertarianism?
chapter abstract

Wenzel begins with a commentary on today's runaway government and its negative consequences. He proposes a libertarian alternative: Liberty is the primary political good, and legitimate government is confined to protecting individual rights. Although rights are crucial, a rights-based approach to politics is fraught with epistemological pitfalls. As a professional economist, rather than a political philosopher, Wenzel thus emphasizes the foundations of libertarianism in "robust political economy"—the search for institutions robust enough to withstand the basic facts that human beings are neither omniscient nor benevolent. Those institutions are a constitutionally limited government that defends individual rights and stops there. Wenzel discusses the two extreme strains of libertarianism: classical liberalism (which allows for minimal government management of the economy) and anarcho-capitalism (which rejects coercive government in favor of voluntary governance mechanisms). He rejects both in favor of minarchy: government limited to the defense of life, liberty, and property.

Wenzel turns to a critique of Schlueter's exposition of conservatism. Natural law liberalism has many qualities, and it contains the seeds of protection against tyranny and the conditions for human flourishing. But it has three fatal flaws. First, human ignorance casts serious doubt on the possibility that we can indeed discover an "objective" moral order; this is compounded by the historical fact that human understandings of natural law have varied over the centuries. Second, even Schlueter's careful definition of the "common" good goes too far; in a world of public choice theory, we must be extremely careful about imposing private preferences through public means. Third, the American founding contains tensions that natural law liberalism glosses over; just as there are many elements of liberty, there have also been many troubling elements, from slavery to quashing dissent and from state abuses to seeds of economic interventionism.

Schlueter begins by identifying five areas where conservatives agree with Wenzel's account: the importance of well-designed institutions, the cognitive and moral fallibility of human beings, the dangers of government capture, the rejection of social engineering, and the singular ability of voluntary associations to coordinate human activity. But Schlueter argues that libertarians wrongly conclude from these points that political authority should be strictly limited to preventing coercion. This conclusion is ultimately rooted in the false libertarian belief that politics can be understood in terms of the science of economics. He supports this claim by critiquing three different strains of libertarian thought: James Buchanan and public choice economics, F. A. Hayek and the knowledge problem, and Robert Nozick's principle of self-ownership. He concludes by calling, not for the elimination of politics, which is impossible, but for the restoration of the norms of citizenship and statesmanship that animated the American founders.

The debate between libertarians and conservatives is not merely theoretical. Policies have a real impact on human flourishing. In this chapter, Wenzel first discusses the classical liberal and anarcho-capitalist approaches to immigration, marriage, and education. Immigration can be explained as a fundamental right of individuals to travel peacefully, but the political economy case emphasizes the difficulty of imposing private cultural and economics preferences through public means. Minarchy rejects the market failure justification for government-provided education; markets and civil society will provide education efficiently and without the risk of the imposition of private preferences through public education. The minarchist case for marriage relies primarily on the changing understanding of marriage over the centuries and the sad consequences of externally imposed definitions, but marriage in a free society also comes down to the right of peacefully contracting individuals to determine the contents of the contract they are entering.

Immigration, marriage, and education bring the libertarian–conservative debate into clearer focus by highlighting the question of whether politics can be adequately understood in prepolitical and economic terms or whether it requires a larger view of membership and the common good. In this chapter Schlueter identifies tensions between traditionalist conservatism and neoconservatism before offering a conservative position that draws on the best insights of both groups. On immigration, he opposes open borders but defends a generous immigration policy. On education, Schlueter shows how and why classical liberals like Adam Smith, Thomas Jefferson, and Alexis de Tocqueville defended a limited but positive role for government in promoting education. Finally, Schlueter draws on overwhelming evidence in the social sciences establishing a strong connection between heterosexual, monogamous marriage and the overall well-being of spouses and children, to support his arguments in favor of traditional marriage law.

Schlueter concludes by responding to three formidable libertarian challenges to conservatism: skepticism about moral knowledge, disagreement about the common good, and the diversity of the American founders. Schlueter argues that libertarianism is vulnerable to the same objections Wenzel lodges against conservatism. First, Schlueter shows how historical changes in moral knowledge do not undermine the soundness of moral knowledge any more than historical changes in scientific knowledge undermine the soundness of scientific knowledge. Schlueter next argues that because there is no neutral position on the nature of the common good, the only way forward is political deliberation. Finally, Schlueter argues the unity of the American founders rests precisely in their "conservative" awareness that moral and political disagreement, and thus politics, are permanent and inescapable features of human life, and their attempt to incorporate this awareness into a decent and free political order.

Wenzel opens this chapter by noting that conservatism has many strengths. Libertarianism can learn from conservatism's romantic vision (if tempered by the realism of libertarianism), and it can learn from conservatism's emphasis on the virtues required for a free society (if taught voluntarily through civil society). Wenzel responds to two objections from Schlueter. First, because of human ignorance and a flawed political process, libertarianism rejects the imposition of ideas or moral beliefs through state coercion. Second, Schlueter rightly points out that the libertarian promotion of government neutrality is itself not neutral; libertarianism does indeed compel everybody to respect the individual rights of others, and it indeed prohibits anybody from imposing ends on others through coercion. But it stops there. Ultimately, libertarianism offers a recipe for human flourishing; or, more precisely, it offers the institutional framework within which free individuals can determine their own ends and flourish.