STANFORD
UNIVERSITY PRESS
Greening of Capitalism
How Asia Is Driving the Next Great Transformation
John A. Mathews 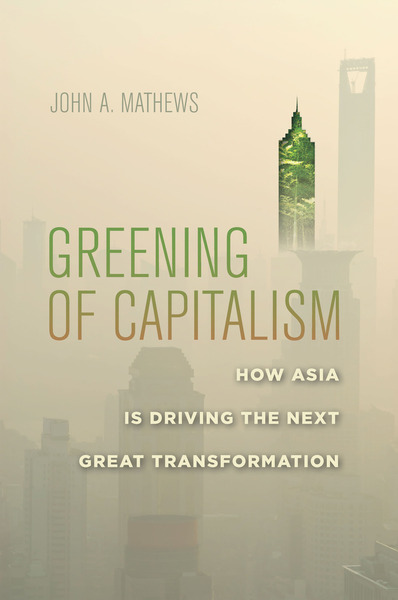 The setting for the book – how industrial capitalism has been a boon for the world, raising productivity and incomes, but now threatening our industrial civilization with collapse. The principal challenge, it is argued, is to rethink the workings of capitalism to bring it into alignment with its ecological setting. Questions then immediately present themselves: where will the new shoots of a green economy come from? Which countries are likely to lead the transition, and why? Is it already too late for changes that will work? The chapter then summarizes the argument to be developed.

The second chapter opens with a discussion of the first "Great Transformation" and the process of industrialization itself, which has proven to be such a powerful transformative influence. The creation of industrial capitalism was achieved first in Britain in the 18th century, it ushered in an industrial revolution, which then spread through the West, creating wealth as it did so, and is now spreading worldwide, principally to China, India and Brazil. This Great Transformation (Polanyi 1944) was achieved through far-reaching changes to the economic availability of labor, energy, of natural materials and finance. These are the markets whose functioning will have to change in an eco-aware capitalism – and they are markets that are already changing in China as it accomplishes a Great Convergemce with the West. But the industrial model being used cannot scale.

The third chapter evaluates the evidence as to why "business as usual" cannot be allowed to continue. It is the vast scale of the changes to the natural world unleashed by industrial capitalism that is the core issue for sustainability. The workings of markets, finance and securitization have allowed an economic system to flourish that is completely divorced from its ecological moorings. The mode of operation now is through "overshoot and collapse" in one market after another – peaking of oil and other fossil fuels being the most obvious symptoms. Global warming and its dire consequences constitute the end result. The issue is to re-establish the system's moorings by reframing capitalism as a system embedded in an ecological matrix. This calls for a new eco-logic of capitalism, focused on the three fundamental sectors of energy, resources (commodities) and finance.

Part II is the substantive core of the book, devoted to the three fundamental sectors of capitalism where changes are going to be needed, and where changes are already under way. Chapter Four discusses the transition from production systems based on fossil fuels to systems based on renewable energies. The generation of power through harvesting renewable energy supplies constitutes a completely different energy foundation from one based on exploiting fossil fuels drilled or mined from the earth. In place of international conflict being fuelled by geographical accidents where oil is found in some countries but not others, all countries will have the option of building the technologies and industries needed to harvest renewable power. China has emerged as world leader in this historic transition, creating markets, building industries, and investing in clean technologies. Renewables then emerge as the default option for the energy system of a global green capitalism.

5 From the Linear to the Circular Economy
chapter abstract

Chapter Five discusses the complementary shift that is under way from the linear economy, with its wasteful resource practices, to a Circular Economy where everything is recycled. The prevailing model is based on a linear process starting at one end capturing natural materials and, at the other, dumping the wastes again in the sink called "nature". But we know that the biosphere works according to great cycles or recirculation of materials, where wastes from one process become nutrients for another. The capitalist version of this involves eco-linkages, where one firm's waste products become another's inputs, and entrepreneurial activity is focused on discovering and implementing such eco-initiatives. The Chinese call this a "Circular Economy" and it is already embodied in the country's current12th Five Year Plan. The circular economy provides a template for the green economy – and the default option for the resource system of a global green capitalism.

6 From Generic to Eco-Finance
chapter abstract

Chapter Six discusses the complementary changes in finance needed to drive through these changes in the energy and materials markets. Apart from the toxic effects of many financial derivatives, introduced without regulation and wreaking destruction, the banking and finance sector has also developed sophisticated instruments for creating credit and channeling finance to companies looking to invest in new processes. Green economy projects are looking increasingly attractive and are to be serviced by targeted finance (green banks, climate bonds). As they become adopted by institutional investors such as pension funds, these green credit instruments promise to aggregate projects and lower the cost of finance, thus making green economy projects even more attractive. Eco-finance will then emerge as the default option, offering a more stable as well as sustainable foundation for a green capitalism.

7 The Transition to a Green Economy
chapter abstract

Part III draws the threads together to discuss the emergence of this new model of "green development", or green growth capitalism. Chapter Seven is concerned with the process of transition itself, emphasizing the barriers and difficulties encountered by any change on the scale of the new greening trajectory. The greening of markets for energy, commodities and capital can be expected to propagate to encompass the entire economy, through multiple inter-firm connections and driven by competitive forces. Green products will call for new value chains that will propagate via intermediate suppliers and aggregators back to ultimate commodity suppliers, where the greening of commodity markets will exert their effects downstream. The barriers that stand in the way of this emergent system are formidable, from the protection of vested interests and continuation of subsidies to fossil fuels, to the clash of sectional interests. Ultimately it is strong states that drive fundamental change.

Chapter Eight is concerned with the character of the green economy itself – how it could be conceptualized, represented, studied and analyzed. The argument is developed that the best recipe for dealing with climate change, and with all other features of an industrial capitalism that threatens to grow out of control, is to ensure that the markets in which capitalist firms operate are regenerative, and work in alignment with ecological limits. The emergence of a green economy will be systemic, its parts interacting with each other, and it will call for a new Green Economics that is less concerned with linear growth resource throughput (as measured by GDP) and more concerned with the ecological limits to economic activity. The chapter engages with ideas of the steady-state economy and resilience, painting a picture of a green economy as a biomimetic system, modeled on the successful cycles created by life on Earth.

9 The Greening of Capitalism
chapter abstract

Finally chapter Nine brings together all the elements of the green that is emerging in the 21st century, where the firm itself can grow but the system as a whole remains within its ecological limits. There will be growth and innovation in this system, but not the extensive growth that has characterized industrial capitalism to date. It is likely to emerge first in China because that is where the problems are worst and where the state is powerful enough to drive through the changes needed, backed by a commitment to sustainable enterprise as a way of legitimizing the regime. This next industrial capitalism is one that will not cost the earth. But will it appear in time, and will vested interests allow it to propagate?