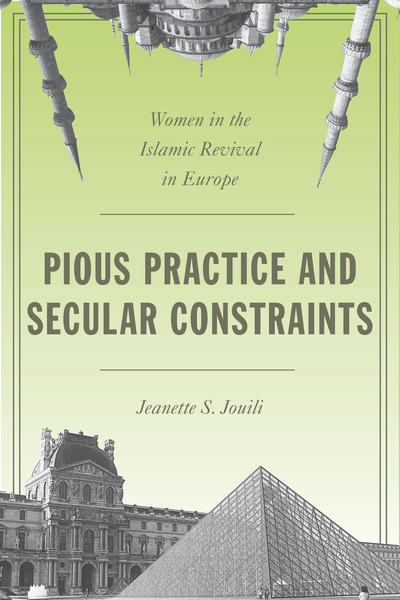 Contents
Excerpt from Chapter 1
Contents and Abstracts
2 'I Want to Instruct Myself to Strengthen my Faith': Learning in Islamic Institutions
chapter abstract

Chapter Two discusses what my interlocutors considered the most pivotal moments in their own process of becoming "committed" or "practicing" Muslims, namely, the phase of studying Islam. For these women, this shift takes place within institutes for Islamic learning that proliferate today in European urban centers. Moving beyond the existing studies of these centers, defined by an interest in institutions and religious authorities, I argue that the significance of these study circles, which employ a quite different pedagogy than traditional Islamic institutions of learning, lies in their role of building new kinds of 'affective' communities and in fashioning new types of Islamic sensibilities and dispositions. Aspiring to live an "authentic" Islam that does not obstruct leading a "modern" and European life-style, these 'new' Islamic communities of young, European-born practitioners situate themselves in sharp contrast to a parental generation, criticized for its traditional and unreflective Islam.

3 'Your Nafs Pulls You Down, Your Spirit Up': Struggling for Virtuosity
chapter abstract

Chapter Three studies the many obstacles my interlocutors face in learning and enacting the various embodied Islamic practices that define a virtuous Muslim woman. The ethnographic material looks in particular at ritual prayer (salat) and modesty in dress and conduct. Because adopting these practices occurs in a secular context where the practices' underlying assumptions cannot be taken for granted, this chapter also investigates how the women themselves reason, question, and justify, and rehearse these acts. I link these various and at times conflicting modes of reasoning to the women's effort to find a balance between competing normative claims coming from dominant secular liberal discourses and from the religious tradition as transmitted in the Islamic circles.

4 'My Label Is Not a Feminist, It Is Simply Muslim': Beyond Emancipation Versus Submission
chapter abstract

Chapter Four exposes the women's difficulties in finding and internalizing an Islamic language for women's dignity and self-realization that can provide an alternative to dominant languages of equality, individual rights and autonomy. This is complicated by the fact that the book's interlocutors have been shaped by these liberal values as promoted by the mainstream French or German society. While they consider female empowerment intrinsically related to the effort to live an authentic Islam, learning to submit to orthodox Islamic principles becomes equally decisive in the struggle for virtuosity and piety. These principles are justified with their insistence on the primacy of social responsibility, mutuality, and dependency, at the heart of their ethical framework. By linking the study of ethical self-cultivation to an understanding of a broader social ethics, this chapter serves as a hinge between Chapters 2 and 3 and Chapters 5 and 6.

5 'Housewife with Diploma?': Educated Women between Family and the Workplace
chapter abstract

Chapter Five continues the discussion of Chapter 2 on the role of knowledge acquisition, but pushes it into the context of secular or academic knowledge. It analyzes the women's understanding of education in its broader societal significance, becoming central to their social ethics. Not only is education conceived as one of the important elements for leading a self-fulfilled life, it is especially significant for defining the (gendered) social roles of Muslim women: motherhood and professional career. This chapter shows how education turns into an ethical practice defined by a devotion to the community's collective improvement, which is complicated by personal ambition, aspiration and desire. Looking at personal trajectories and heated debates in the Islamic centers, this chapter illustrates how the women's understanding of their multiple and at times conflicting social responsibilities exposes the challenges posed to contemporary Islamic discourse to define a coherent image of proper Muslim womanhood.

Chapter Six extents the ethnographic analysis of Islamic prayer, Islamic dress and embodied modesty codes (began in Chapter 3), but situates these practices in the context of French and German secular public spheres, where they frequently incur hostility. While my interlocutors understand these religious duties first and foremost in terms of self-techniques supposed to fashion and strengthen a pious self, I illustrate how these practices, in hostile contexts, also get intertwined with concerns about representation: The women aspire to secure recognition not only for themselves and their practices but also for the broader Muslim community and Islam in general. Exceeding many current discussions around "identity politics," I expose the complex ethical reasoning that is involved in the women's negotiations of visibilities and invisibilities: They do not merely consider questions regarding personal salvation, but they also constantly take into account their multiple obligations toward the broader community.

Chapter Seven, the conclusion, undertakes a reflection about the theoretical consequences of my interlocutors' modes of ethical practice and reasoning for our understanding of citizenship and civic virtues. Even contemporary thinkers of pluralism and multiculturalism still define civic virtues mainly as "secular," considering them as the main condition for enabling a space that transcends (divisive) difference. I use this final chapter to make a case for taking seriously non-secular civic virtues when theorizing accounts of citizenship intended to account for pluralist and 'post-secular' societies. This kind of theorizing is crucial for critiquing the transformations of citizenship in contemporary European political discourse and practice, which prove to be more and more exclusionary for (religious) minorities.

This chapter gives an overview of the book's argument, organization and overarching theoretical contributions. It examines the challenges faced by scholars studying Islamic practices within contexts in which Islam has become increasingly stigmatized. The chapter further introduces the book's understanding of ethical practice in its twofold dimension, as non-linear and always emergent and never completed self-cultivation and as a deeply relational and situational moral reasoning. Finally, it describes the interlocutors and the empirical setting of a multi-sited ethnography in two different national contexts.