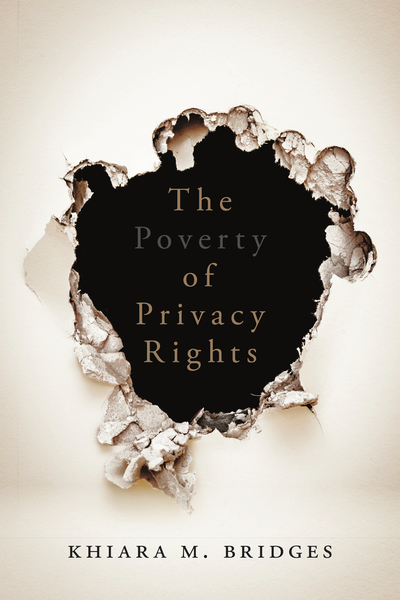 This introduction describes this book's thesis: Poor mothers have been deprived of family, informational, and reproductive privacy rights. Those who are empowered to interpret the Constitution have construed the document to bestow wealthier women with rights that protect their families from state regulation, prevent their most intimate information from being collected and disclosed to third parties, and provide them with a space to decide whether to become mothers without the government influencing their decisions. Simultaneously, the Constitution has been construed to deny poor mothers (and those facing the question of whether to become mothers) those same rights. Because privacy rights are thought to yield specific values, they are recognized and protected; and because it is assumed that these privacy rights will not yield these same values when individuals who are behaviorally and ethically deficient bear them, poor mothers have been denied these rights.

This chapter documents the ubiquitous voices throughout history that have rejected structural explanations of poverty and, instead, have argued that poverty is the result of individual shortcomings. This chapter shows that the discursive link between poverty and immorality continues to the present day: One can easily hear a narrative in political or popular discourse that links poverty with behavioral or ethical deficiencies. This chapter also shows that the Court's jurisprudence has come to reflect the moral construction of poverty, examining several cases in which the Court's rationale for refusing to limit the power of the government vis-à-vis poor individuals reveals an assumption about the pathology of the poor person—usually a poor mother—subject to privacy invasions. This chapter goes on to make the argument that positive rights are not the solution to poor mothers' predicament.

This chapter explores the doctrine of unconstitutional conditions, which provides that it is unconstitutional for a state to premise the conferral of a benefit on the beneficiary's surrender of a constitutional right. The chapter argues that unconstitutional conditions cases reveal the justification for the state's denial of privacy rights to poor mothers, showing that the state denies individuals a right when it disbelieves that the individual will realize the value that the right is intended to generate. This chapter goes on to show that poor women lack privacy even when they do not receive a welfare benefit. It contextualizes the privacy invasions that poor mothers endure when receiving welfare benefits in a broader experience of privacy invasions endured by virtue of being poor. This contextualization demonstrates that poor mothers' lack of privacy rights is not a function of reliance on government assistance, but a function of their poverty.

This chapter explores various justifications for the family privacy right including instrumental, noninstrumental, and pragmatic justifications. It concludes that the moral construction of poverty counsels in favor of dispossessing poor mothers of the right because it suggests that poor mothers will not realize the value that the right is designed to yield. The chapter goes on to examine the overrepresentation of the poor as subjects of child welfare investigations and within the foster care system—two governmental interventions into the family that the family privacy right purports to allow only when the state suspects child maltreatment. It then shows that the fact of poverty itself gives the state reason to suspect child maltreatment. Accordingly, the state always has the authority to infringe on poor mothers' right to family privacy. The chapter concludes by suggesting that a right that is always already infringed is not right at all.

This chapter explores the justification for the informational privacy right and concludes that poor mothers have been deprived of it because, as with family privacy rights, the informational privacy rights will not yield the value they aredesigned to yield when poor mothers bear them. This chapter goes on to describe a type of right to informational privacy that has not yet been conceptualized fully in the literature. This right, absent compelling circumstances, would prevent the state from coercing those who are marginalized culturally and socially to perform confessions that might be taken to justify their marginalization. This right would be the equivalent of the Fifth Amendment's prohibition against being compelled to be a witness against oneself, except it would apply in noncriminal contexts.

The conclusion proposes that poor mothers will only enjoy the positive or negative privacy rights that are formally bestowed to them when an individual's economic failure is no longer thought to indicate a flawed character. It examines other historical moments where disenfranchised groups struggled for rights that had been denied to them, focusing on black people's struggle for the right to vote and sexual minorities' struggle for the right to marry. These precedents reveal that formerly disenfranchised groups were successful in acquiring the rights that they sought not because they appealed to the Court to interpret the Constitution differently, but because they shifted the cultural discourse. The law ultimately came to reflect that transformation of culture. The lesson of history is that poor mothers will only be granted privacy rights when our culture shifts, and the moral construction of poverty is unseated from its present discursive throne.