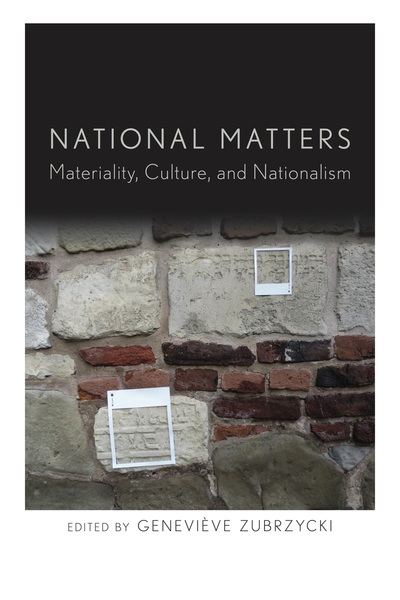 The volume's introduction first discusses theoretical cues and gaps in the literature on nationalism before arguing that the recent material turn in the social sciences and the focus on materiality can help fill those gaps. It then turns to a description of individual chapters, a discussion of overlapping themes, and the articulation of the volume's contributions.

1 Artisans and the Construction of the French State: The Political Role of the Louvre's Workshops  Chandra Mukerji
chapter abstract

The French state, arguably the first modern state, subordinated high nobles at court with a cultural program. Artisans housed at the Louvre, men of low rank working backstage to power, designed the image of Louis XIV as the Sun King, and made Versailles an immersive environment populated in art with gods and heroes of the ancient world. With painting, sculpture, interior decoration, and theater, they created seductive dreams of imperial glory that far outshone political reality. They presented France as heir to Rome and already in a process of classical revival. They made the king and state seem capable of creating a great empire. The nobility at court learned a new political logic through a cultural experience of it.

2 In, On, and Of the Inviolable Soil: Pottery Fragments and the Materiality of Italian Nationhood  Fiona Greenland
chapter abstract

This chapter focuses on the relationship between fragmentary objects and national culture in Italy. Drawing on theories and analytical methods from cultural sociology, archaeology, and anthropology, it engages with the following questions: (1) Given the focus on complete objects in the study of material culture and nationhood, how might we construct an analytical framework for fragments? (2) Why did pottery fragments become embedded in processes of Italian nationhood formation at the state and regional levels in a specific historical moment (last quarter of the nineteenth century)? In the course of generating answers to these questions, the chapter also outlines the principle of beni culturali (cultural goods) in the state's management of cultural objects with historic significance. It concludes that ancient pottery effects a symbolic double-hit: it is found in the sacralized national soil and made of that soil.

This chapter analyzes the genealogy and reactivation of Canada's most enduring origin myth, the "National Dream," which tells the story of a modern nation joined literally and symbolically by technology. Drawing on recent scholarship on the material and visual embodiment of national consciousness, it explores the material conditions that made possible the articulation of a distinct Canadian identity in the first place and then argues that the exploitation of the tar sands in Canada is positioned by corporate, government, and labor interests as a moral referendum on Canadian independence and a determining feature of contemporary Canadian national identity. This framing of the controversial exploitation of that raw matter sits well with state leadership seeking to reinvest the mythic National Dream with meaning in order to legitimate itself and mobilize civic support to its program.

Creating successful multicultural societies and a global community that can respond to global problems is the challenge of the day. If museums in the past helped create national citizens, do they now help create global citizens too? How is the nation displayed in relation to the globe and what is it about the countries and cities where museums are located that helps explain their curatorial choices? This chapter answers these questions by analyzing where Boston's Museum of Fine Arts falls on the cosmopolitan-nationalism continuum—a position produced by the intersection between national and urban cultural politics and the globalization of culture, an encounter that not only transforms museums but to which they are important contributors.

5 A Brief History of Sweat: Inscribing "National Feeling" on and through a Football Jersey  Claudio E. Benzecry
chapter abstract

This chapter shows how the jersey for Boca Juniors, one of Argentina's main soccer teams, went almost unchanged from 1926 to 1980, and how the continuity guaranteed the recognition of the team, its colors, and what it stood for. The continuity of the jersey in time also made for a longer chain that connected different generations of players and of fans. In telling the story of how the jersey for Boca Juniors changed thanks to the intervention of brands by transnational corporations, this chapter aims to also answer what happens to the lineage of the team, its genealogy, and the bonds formed between and among team members and their fans. The chapter has a subsidiary objective as well, to explain not only what gets lost with the new jersey, but also the new lines of action afforded by the object in its new configuration.

The chapter offers an object-centric analysis of banal nationalism in mainstream heritage culture. How do banal objects come to feature in national imaginations in addition to extraordinary ones, and how do these two categories relate to each other symbolically? Which kinds of social bonds do these ordinary objects create and support? And what does an object-centric approach contribute in return to our understanding of ordinary, "cold" types of nationalism? The chapter answers these questions through a semiotic analysis of the popular show Chefs d'œuvre en péril, produced and broadcast on French public television (the ORTF) between 1964 and 1974, at the dawn of the heritage age.

The chapter explores the intersections between markets and new forms of nationalism in contemporary Hungary by looking at the manufacturing, sale, and consumption of radical nationalist consumer objects. It argues that the increasing rightwing radicalization of Hungarian politics has been fueled by an expanding industry that effectively commodifies these sentiments. The analysis focuses on two key areas of radical nationalist cultural production: book publishers that specialize in printing and disseminating nationalist literature, and clothing brands that market explicitly nationalist fashion items. By tracing the symbolic economies of new forms of radical nationalism, the chapter highlights an important dimension of everyday nationalism. This analytical lens also helps to demonstrate that contemporary rightwing radicalism is not a codified political ideology but a more fluid subculture in which expressive symbols, material objects, rituals, everyday consumption, and lifestyle patterns are essential carriers of political convictions and markers of group boundaries.

Nations are made real not only through concrete symbols, icons, and institutions, but also through lived experiences. Yet the production and reproduction of nations at a phenomenological level remains little explored. This chapter examines how cultural practices engage objects to sense, enact, and even embody the nation. To explore these processes, it takes up the tea ceremony as a site that facilitates a concentrated experience of Japaneseness within Japan. It examines how the material components and practices of the tea ceremony bear similarities to—yet are fundamentally different from—mundane counterparts in everyday life. This disjuncture, as the tea ceremony transforms the ordinary into the extra-ordinary, demands an attentiveness that sustains what many practitioners call a "Japanese experience."

Before World War II, Poland had the largest Jewish population in Europe. With the Holocaust and a country left in ruins, Jewish life all but disappeared from that country. This chapter analyzes non-Jewish Poles' material discovery of Jewish traces and the recovery of Polish Jewish history, as well as the performance and consumption of Jewishness in various venues. It argues that for many activists involved in acts of salvage remembrance and performance, postwar Jewish absence has come to represent the loss of a multicultural Poland. Their activities are meant not only to recall past Jewish presence on Polish lands, but to re-member; to attach a prosthetic Jewish limb to the Polish national body to expand the symbolic boundaries of Polishness.

10 A Temple of Social Hope? Tempelhof Airport in Berlin and Its Transformation  Dominik Bartmański
chapter abstract

In the fall of 2008 one of the oldest city airports in the world, the iconic Berlin Tempelhof, was closed and with it an eventful chapter of German history. The airfield was reborn in the spring of 2010, albeit in a different capacity as a public park. It quickly became a celebrated leisure space in Berlin, one of the most spectacular parks in the world. How was this remarkable transformation possible? What made such a radical reshuffling of land use and social meaning feasible and successful? In order to answer these questions, this chapter refocuses analytical emphasis from political intent to phenomenological content. Understanding urban places, especially their transformations and meanings, requires accounting for their experiential aspects in relation to the city- and time-specific cultural context. A phenomenological analysis sensitive to materially mediated experiences is presented as a necessary component of cultural sociological explanation of such cases.