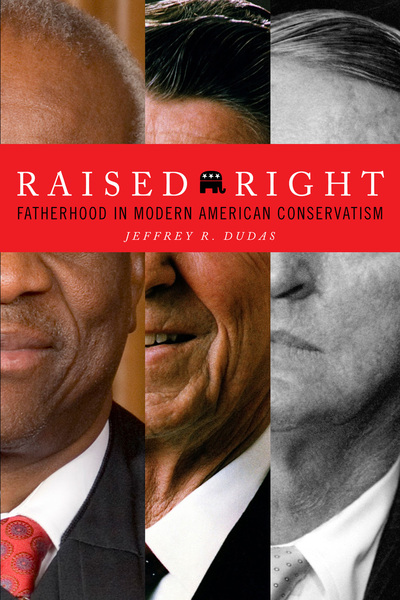 Chapter 1 is the book's substantive and methodological introduction. It first, identifies the paternal rights discourse that suffuses modern American conservatism and introduces the book's argument that this discourse exerts multiple and paradoxical effects on the trajectory of both American conservatism and American politics writ large. Second, it situates the book's analysis of the paternal rights discourse in the scholarly traditions of interpretivism, on one hand, and critical social theory (including elements of critical legal, feminist, race, and psychoanalytic approaches), on the other hand. Chapter 1 thus develops the conceptual scaffolding on which the book rests.

2 Something to Believe In: Modern American Conservatism and the Paternal Rights Discourse
chapter abstract

Chapter 2 first investigates the large body of scholarship that details the rise of the conservative movement in modern America. While it establishes that the success of American conservatism depends on prominent movement figures who at once appeal to a mass public and gild the fractious tendencies of conservatism's member populations, the accumulated scholarship offers little in the way of understanding of how the figures accomplish this feat. The second half of the chapter corrects this scholarly omission by documenting the obsession of modern American conservative intellectuals with the intertwined discourses of paternal authority and individual rights. It was an obsession that received full articulation in the personal and political narratives of the influential conservative figures who are the subjects of Chapters 3-6. Accordingly, in addition to its contribution to the existing scholarship on modern American conservatism, Chapter 2 prepares readers for the analyses of movement icons that follow.

Chapter 3 investigates the legacy of William F. Buckley Jr., focusing on a neglected aspect of his career: the best-selling Blackford Oakes spy novels. The Oakes novels, produced between 1976 and 2005, are distinguished within Buckley's oeuvre because their fictional form allowed him to present his vision of virtuous American citizenship in crystalline terms, unencumbered by the contemporary, parochial concerns that dominated his political writing. Filtered through the hypermasculine and sexually voracious Cold War–era adventures of a protagonist with whom Buckley shared particular biographical elements, these novels contain stark ruminations on the character of the American nation and are his clearest articulation of the familial, gendered, and rights-based desires and fears that are central to American conservatism. This chapter shows how the Oakes novels prepared the way in fiction for the Reagan Revolution of the 1980's that elevated American conservatism to new heights of prominence.

4 "The Greatest Nation on Earth": Ronald Reagan, Fathers, and the Rights of Americans
chapter abstract

This chapter explores Ronald Reagan's use of the paternal rights discourse. Reagan's handwritten speeches, letters, and radio broadcasts make clear that this discourse was the unifying thread of his nearly thirty-year political career. Conjoining childhood submission to paternal authority with the mature, responsible practice of rights later in life, Reagan's normative vision of American citizenship led him to at once champion the rights of America's "average" citizens and attack the rights of the nation's subversives – its "welfare queens," "wild animals," and "little criminals." As Reagan's attacks on student protesters when governor of California and his conduct of the Contra war when president of the United States make clear, the paternal rights discourse encouraged Reagan to pursue harshly punitive, frequently troubling, and ultimately ineffective measures in the name of fathers and rights. Reagan's paternal rights discourse nevertheless worked as a potent intellectual template for contemporaneous and future conservative politics.

5 All the Rage: Clarence Thomas, Daddy, and the Tragedy of Rights
chapter abstract

This chapter turns to current United States Supreme Court Justice Clarence Thomas, revered by conservatives as "the leading conservative in America today." Although Thomas is widely seen as the "silent justice," he has offered many speeches, interviews, and memoirs that are highly revealing. Using this primary source material, this chapter finds that Thomas's paternal rights discourse unites him with the fathers of modern American conservatism (e.g., Buckley and Reagan), but has ambivalent consequences for Thomas himself. These consequences manifest in Thomas's personal life and in his jurisprudential philosophy of "originalism," which demands fidelity to the constitutional desires of the founding fathers. Thomas's jurisprudence thus evokes the abiding paradox inherent in American conservatism's paternal rights discourse. Unable to successfully navigate this paradoxical tension, Thomas embodies the tragedy of American conservatism: his devotion to paternal authority prevents him from emerging as the autonomous, self-governing citizen of his, and conservatism's, dreams.