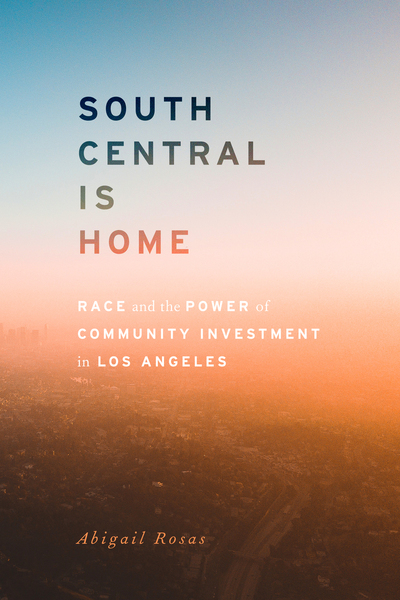 IN FALL 1965, Ruth Smith and her husband boarded a train in Houston, Texas, and made the journey west to search for better housing and employment. They arrived in Los Angeles in the aftermath of the Watts uprising and settled into a community devastated by days of unrest. Shortly after their arrival, Ruth’s husband found work in the rubber-tire industry, where he labored for many years until the plant’s closure in 1980; he later became a janitor, an occupation he held until his death in 1989.1 His job in the tire industry provided an income to purchase a home in South Central Los Angeles.2 Ruth and her husband became proud owners of a modest home and chose the residential location because, as Ruth said, “I loved this street because there was a Baptist church at the corner.”3 Ruth spent her time and energy helping at the Baptist church, and throughout the years became publicly visible and accountable to her South Central neighbors and friends.

At the turn of the nineteenth century and into the mid-twentieth century, thousands of African American migrants boarded buses and headed west to leave the racial violence of the South in search of opportunity and survival in Los Angeles. Unlike the U.S. South, Los Angeles offered employment; political representation; and the ability to establish cultural, economic, and social centers. The promise of a better life in Los Angeles for Black migrants had its limits, as exclusionary policies in housing and leisure increasingly segregated them into South Central. Black migrants transformed exclusion and segregation into spaces of investment and unity, and in doing so, developed a vibrant African American community4—a community that Ruth would grow to call home. The opportunities born out of segregation served to render South Central Los Angeles as space, place, and community marked as African American.

Eventually, however, South Central’s racial character as largely African American would collide with the increased settlement of Mexican immigrants in the United States. Dolores Rosas’s migration is one of myriad stories of undocumented immigrants settling in South Central. In fall 1978, Dolores boarded a bus in San Martin de Hidalgo, Jalisco, Mexico, to a train station in Guadalajara, Jalisco. With her infant child in tow, like countless Mexican immigrants before her, she crossed the Mexican countryside by rail before arriving in Mexicali. Dolores relied on a coyote (smuggler) to bring them into the United States, with her final destination being Los Angeles. Arriving in Los Angeles, she and her daughter reunited with her husband, Francisco Rosas. He had immigrated to Los Angeles before her to find an apartment and a job and set up a home for Dolores and their young daughter.5 Dolores’s new home was in the heart of Los Angeles’s African American community—South Central Los Angeles.

Dolores was shocked to learn that her new neighborhood was predominantly composed of African American children, women, and men. Francisco had failed to mention that they were going to settle in a racially diverse community. Dolores recalls, “He told me, don’t worry, there’s all kinds of people. Everything will be all right.”6 He had secured an apartment on 50th Street and Main Street, a block away from where fellow Mexican rural hometown friends had settled. However, their immediate neighbors were mostly African Americans. At first, Dolores believed they would live in South Central only temporarily, but as the years passed South Central became more and more their world, their center, their home. Dolores and Francisco Rosas are my parents, and my upbringing centered on learning more about South Central’s history with heart. They instilled in me the need to know our neighborhood’s relational interracial history as a meaningful step toward discerning their personal investment in raising me in South Central with humanity and optimism for the future of this community. Such intellectual inheritance inspired my commitment to investigating and writing this history.

This personal connection to South Central and its history compelled me to consider how Ruth and Dolores navigated their way in South Central. Their movement, like that of other migrants and immigrants, was born out of necessity and the promise of improved prospects. They quickly learned, though, that they would settle into a community where they would experience the transformations of deindustrialization, joblessness, reindustrialization in the garment and service sectors, a drug epidemic and violence, and police aggression and surveillance.7 In this changing political, social, and economic climate, thousands of Mexican immigrants settled throughout South Central’s city streets.

South Central Is Home illustrates that interracial interactions are muted, tense, and collaborative. Interactions between African Americans and Latina/os do not happen in a vacuum; structural changes such as deindustrialization, racial discrimination, increased law and immigration enforcement, and the decline in the welfare state shape these interactions. To demonstrate the weight of these structural realities, I examine how neighborly interactions, patronage of an African American–owned bank, and War on Poverty programs such as Head Start and community health clinics expose the daily elements of community activism, the dynamic nature of interracial relations, and the sense of belonging that made South Central home for African Americans and Latina/os. These interactions, relationships, and sites represent the ways in which Mexican immigrant South Central residents quickly learned that, like their African American neighbors, they faced a similar racialization by living in South Central together. Over time, such realization inspired a relational community identity between South Central residents that energized them to understand that they experienced and shared a vulnerability which required their individual and community investment in struggles against injustice, underrepresentation, and discrimination.

By World War II, South Central had become popularly known as the “heart of Black Southern California,” and as such was seen as strictly a Black neighborhood.10 This perception of South Central as Black was in large part attributable to the public depictions of its African American residents, but also to the ways in which African Americans constructed a Black identity tied to geography in the midst of bleak economic, political, and social realities.11 The experiences of Mexican immigrant South Central residents are mostly those of individuals who migrated to the United States after 1965 and took residence in a predominantly African American community. To fully understand how this generation of Mexican immigrants became residents in this community entails uncovering how they had to quickly learn their new racial landscape and understand South Central’s enduring Black character.

Race real estate covenants, bank lending practices, realtor behavior, and U.S. government support of white homeowner suburbanization facilitated the racial segregation of residential communities throughout the United States. George Lipsitz argues that the barring of African Americans from white neighborhoods has intricately bound race and geography. In the absence of easy access and mobility to suburban communities, the “battles for resources, rights, and recognition not only have ‘taken place’ but also have required that Black communities literally ‘take places,’” and these spaces have come to be a part of our nation.12 The taking of places has had an impact on how we understand the lived history of racialized space. Racial identity formation is the product of social movements that are simultaneously place-based and race-based, and in the case of South Central Black migrants led to the early efforts of placemaking community formation.

As Lipsitz expertly argues, the struggle for justice is much more than a fight for inclusion in spaces previously denied. The pooling of resources, exchange of services, and appropriation of private and public spaces for new purposes “have been vital to the survival of Black people and Black communities, but they also offer a model of democratic citizenship to everyone.”13 As a result of the restrictions placed on where and how communities of color could live, the African American community turned “segregation into congregation.” Gaye Johnson’s framework of spatial entitlement, describing spatial arrangements as everyday experiences in which communities of color utilize and claim space in the most dehumanizing of situations, demonstrates the importance of congregation for working-class communities of color.14 Marginalized communities create “new collectivities based not just upon eviction and exclusion from physical places, but also on new and imaginative uses of technology, creativity, and space.”15

Economic businesses such as banks, social spaces such as jazz clubs, and political representation bolstered the racialized image of South Central as a Black space and community. By the 1960s and 1970s, the intensification of decades’ worth of disenfranchisement and racism had hampered the entrepreneurial spirit of early twentieth-century Black migrants. Black residents increasingly were unable to own the neighborhoods materially, and they developed innovative ways of augmenting the use and value of the spaces they inhabited for the sake of securing political representation and mobilization.16 Ultimately, the relational community formation that emerged in the latter part of the twentieth century operated within the context of South Central’s racialization.