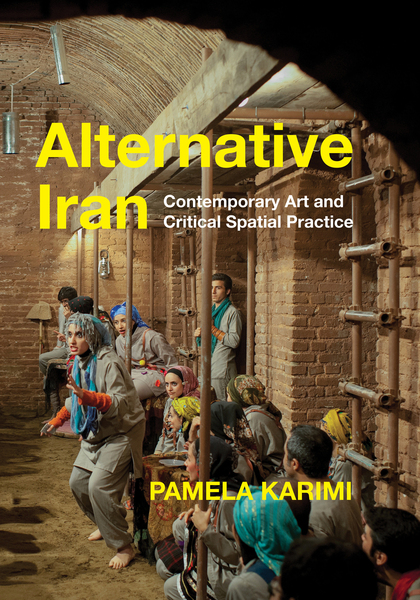 What constitutes the alternative in contemporary Iranian art? Are all unofficial art projects necessarily subversive? Conversely, do all art projects sanctioned by the state inexorably abide by the rules? This introduction lays the groundwork for the different senses of the alternative in relation to Iran's creative enterprise. Maintaining that Iranian visual art, design, and performance practices ebb and flow in the interstices between realms of legality and illegality, visibility and nonvisibility, the chapter outlines the significance of studying art in the context of critical spatial theory and debates around private and public spheres. The chapter then introduces the historical significance, political relevance, and theoretical underpinning of the thematic concepts shaping the book's four subsequent chapters: invisibility, escapism, ephemerality, and improvisation. It shows how each of these conceptual frameworks deals with a particular aspect of alternative art and its relation to the sites in which it is produced and consumed.

Exploring the covert spaces created by nonconformist groups in the crucial years leading up to the 1979 revolution in Iran, this chapter investigates the ways in which the revolutionary regime's culture of control led to self-censorship—to masking or modifying the intentions of a creative work, or to avoiding sensitive content altogether. Examining artistic and cultural resistance in tandem with a variety of loosely covert spatial types—namely, the basement, the home, and derelict buildings—the chapter explains how and why many forms of cultural and artistic practices moved from the public to the private sphere in the 1980s and early 1990s. As the chapter evolves, it presents examples of the gradual co-option and "institutionalization" of makeshift art spaces and alternative projects by the regime and other powerful agents.

This chapter's focus is the distance from the center that allows for a greater measure of freedom and independent thinking. Making art in deserts, mountains, caves, and faraway forests is a kind of "institutional critique" that goes beyond the practice of taking art out of museums in protest against their policies. The retreat to remote places, even when completely sanctioned by authorities, alludes to what de Certeau calls "escaping" the internal snares of a domineering culture "without leaving it." In its own "escapist" digression, the chapter also shows that many Iranians also escape to remote and desirable places to enjoy a luxurious life away from the eyes of others. These two categories of escapism—practiced not only by alternative artists and marginal communities but also by the wealthy and the well-connected—capture the essence of the built life of the two groups of Iranians under discussion.

This chapter reexamines the question of ownership of public space from a perspective that is unique to urban life in Iran and invites new ways of assessing the rhetoric of "openness" and "accessibility." In contrast to the spaces discussed in previous chapters, the case studies in this chapter are not concealed or out of reach. Performances and installations take place in plain sight, and in accessible spots around busy urban centers. However, due to their often subversive nature they are invariably short-lived, even if approved by the authorities. The chapter subsequently reveals the state's implementation of regulatory apparatuses through its own aestheticization strategies and design interventions. Against the black-and-white division of state-run ideological public art projects and those of independent interventionist artists, there is a new wave of correlation, intersection, and overlap in the spatial practices of the two.

4 Improvisation: Artful Curation and Spatial Reconfiguration in and out of Conventional Sites
chapter abstract

This chapter focuses on alternative curatorial practices in more conventional settings such as galleries and carefully designed or revamped architectural spaces. These activities, which are often fully sanctioned by the authorities, break with the usual strategies of loose covertness, relying instead on a range of frameworks on improvisation and negotiation. Thanks to these tactics, curation has become an art form in and of itself, engaging directly with the exhibition and site as a departure point for critical spatial practice. Curators, whether they are artists, performers, or professional gallery directors, radically transform the parameters of the gallery or performance site through spatial reconfiguration and careful choreographing of viewers. Toward the end, the chapter turns its attention to the ways in which architects and architecture enthusiasts "curate" the city, reconfigure mundane spatial organizations, and engage with historic architecture to open up new possibilities for Iranians to envisage and live an alternative life.

Do alternative art projects and critical spatial practices in Iran live up to their ambitions? Can they be read as forms of resistance against the established art market or the apparatus of the state? What are the differences in the way the work is perceived inside and outside of Iran? Is the aspiration of these art forms to enact social change recognized and celebrated or, conversely, challenged? What is the relation between the early independent and covert examples featured in this book and the contemporary unconventional art projects that are openly sponsored by powerful agents? With each case study in the book, these are the questions that are addressed. This epilogue brings these topics into sharper focus.