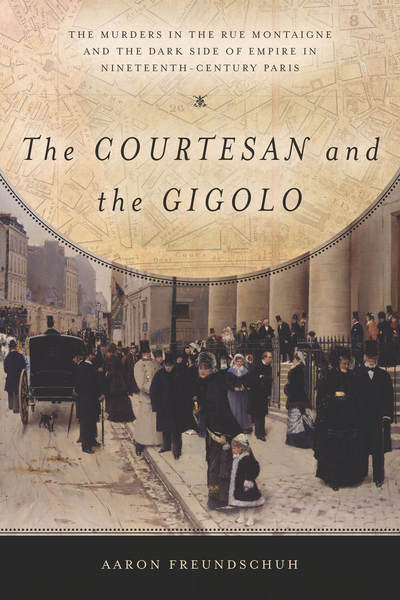 The murders in the rue Montaigne delivered a collective shock that was, at the outset at least, primarily due to the address of the crime scene. The area around the lower Champs-Elysées was a Milky Way of gorgeous limestone-fronted construction and high living. The newspaper reporter Georges Grison described the neighborhood’s social character as “semi-bourgeois, semi-aristocratic,” for it stood at the crossroads of modern cosmopolitan, aristocratic, and republican cultures.1 As Grison knew better than anyone, these factors would inform the authorities’ investigation just as they colored the newspaper coverage of the murders in fundamental ways. The city’s last sensational multiple homicide, the Troppmann murders of 1869, were every bit as gruesome and involved even more victims. Yet the rue Montaigne case was categorically different, Grison concluded. Whereas the Troppmann tragedy had taken place in the middle of a “deserted field” on the industrial fringe to the city’s northeast, the 1887 murders upended an “elegant quarter.”2

The neighborhood had not always been so pristine, to say the least. Just four decades earlier, a coalition of local businessmen and residents had banded together in a petition to brush up the neighborhood’s image. At that time, and for as long as anyone could remember, the tree-lined path that intersected the lower roundabout of the Champs-Elysées had been known as Allée des Veuves (Widows’ Alley). Despite the whiff of the macabre, the name’s origins lie in an odd sort of euphemism, one that by the late 1840s had begun to seem coarse to the new waves of people settling there.

That was because the path’s reputation was that of a notorious axis of the Parisian night, until recently embedded in an otherwise pastoral area. Back in the eighteenth century the lower Champs-Elysées was, by day, a pleasurable promenade, where fashionable members of high society removed themselves from the stench and gargoyles of central Paris. But at sundown a different crowd set upon the place to engage in unsavory commerce and revelry.

Yes, the petitioners conceded, the lower Champs-Elysées had long served as a “discreet haven for sex of a more or less delicate nature.”3 In fact, the area was neither delicate nor terribly discreet, the absence of lights notwithstanding. Generations of Parisian whores—the aforementioned “widows”—gathered along the path at night, alongside “libertines” and scofflaws who took advantage of its rustic character.

In earlier times the area had been a marshy green with a higgledy-piggledy collection of plots, plantations dotted with farmers’ huts, and, farther out, a few hamlets; tree nurseries and thatched houses provided cover for the denizens’ adventures in congress. At night they sneaked past the city limit just beyond the Tuileries and the place de la Concorde, where the name Champs-Elysées was bestowed upon a muddy slope with an unguessed destiny. The heterosexual and homosexual prostitution that persisted in the brothels around the Champs-Elysées well into the nineteenth century were an open secret, as the petitioners pointed out.4 Out alone for a walk one evening in the early 1830s, the young Victor Hugo chanced upon Widows’ Alley. Hugo was reciting his own poetry aloud when a lookout man, stationed on Widows’ Alley to protect the homosexuals gathering, warded off the unwanted visitor.5

Our petitioners were adept in the jargon of development and progress, and their demand was straightforward. They wanted the prefect to scratch “Widows’ Alley” from the map. In those days, Parisians thought of their city as a work in progress much more than as a historic jewel to be preserved. Like every nascent political regime, developers and neighborhood groups saw the renaming of streets as a potent and inexpensive means of reconstituting the city and eliminating untoward echoes of the past, naughty or otherwise.

The petitioners were probably aware that the terrain situated roughly midway between the place de la Concorde and the Étoile was a perennial target of revamping schemes, both substantial and cosmetic, that aimed at the creation of a suburban zone of upper-crust entertainments. These attempts often ended in comic failure, which is a little puzzling given the desirable location. The most grandiose flop of all was Le Colisée de Paris, a massive open-air venue designed by the famed architect Le Camus de Mézières and wedged between Widows’ Alley and the Champs-Elysées in the 1770s. Envisioned as an answer to London’s successful Vauxhall Gardens, the rotunda structure housed dance halls and shops. It attracted the likes of Marie-Antoinette, but then languished and went bankrupt after just a decade.6

Then arrived another developer with a grand vision, Marie-Antoinette’s brother-in-law, the swashbuckling, debt-ridden Count d’Artois, brother of future King Louis XVI. He called his plan for the land Nouvelle Amérique. At its center would be the place Benjamin Franklin, with surrounding streets named in honor of other American revolutionary heroes.7 Before it could be developed, the French Revolution of 1789 intervened: The count’s property was seized, along with a large parcel of land belonging to the Catholic Church and situated due west of Widows’ Alley.

Predictably the count soured on revolutionaries of all stripes during his long exile. Decades later, as the ultraconservative Restoration King Charles X, he ordered the erection of a statue of Louis XV on horseback in the middle of the Rond Point des Champs-Elysées (this time the 1830 revolution forced him to abdicate, and the statue was not completed).8 In the meantime, France’s first roller coasters (montagnes russes, as they were known: “Russian mountains”) had been constructed as part of an amusement park on an adjacent property first developed by Nicolas Beaujon, a provincial financier who had gotten rich under the ancien régime. There were safety issues at the park, however, and after a war commissary fractured his skull in an accident, the police outlawed risky thrill seeking for a time. It hardly mattered. Paris’s growth made speculation and further residential settlement in the area a foregone conclusion. The city’s population, which doubled twice between 1789 and 1914, began to burst through the fortification walls. More developers swooped in, and a cosmopolitan neighborhood grew up where Beaujon’s park had entertained an international crowd (Russian soldiers had briefly camped on the Champs-Elysées after Napoleon I’s defeat).9

The foul reputation of Widows’ Alley survived nonetheless, thanks to Eugène Sue’s novel about the urban underworld, Les mystères de Paris (1842–1843), an international sensation that is still read today. Sue used the path, almost from the first page, as the setting for underhanded conspiracies, thereby cementing Widows’ Alley in popular lore.

It was then that the petitioners moved to control the damage.

To hear them tell it, the cleanup around the Rond-Point des Champs-Elysées had already been so thorough that Widows’ Alley was no longer consonant with the quarter’s social milieu, a gentry who, it was implied, kept their prostitutes indoors, and who were more used to reading about criminality in the press than acknowledging it in their midst. They assured the prefect in their petition that the spread of “law-abiding lifestyles has erased the memory of another age’s loose morals. With the Champs-Elysées having now become, as was its mythological destiny, a retreat for pure spirits, we believe that the infamy of Widows’ Alley has been buried beneath the ruins of the little houses that formerly lined it.”

The petitioners proposed avenue Montaigne to replace Widows’ Alley, a choice that requires some explaining, given that a small portion of Widows’ Alley that shot directly off the other side of the Rond-Point des Champs-Elysées had been spruced up lately and had been renamed avenue Matignon. Logically, then, the petitioners could have requested that their portion of the old path be treated as a continuation of it. Instead, they expressed a wish to be attached, if only symbolically, to the rue Montaigne, a tiny spoke that rose in a northerly direction rather at odds with Widows’ Alley.

The calculation behind their choice to connect to the rue Montaigne was limpid enough to any observer. It was because the rue Montaigne anchored the modern, prosperous neighborhood then taking form in the lower Champs-Elysées. In its salons commingled old blood and new money, high culture and hints of the elite cosmopolitanism that enticed artists and financiers from all corners of the earth. Planned back in 1795 and cut into the ground where the Colisée de Paris had been, the street stood a mere 300 meters in length, straight as a pin and just wide enough to fit two large carriages side by side. During the course of the nineteenth century it gained a reputation as a quiet residential jewel, an enviable enclave of comfort and affluence for any neighborhood association to emulate. In its modest-sized buildings, poets with their mistresses frolicked, politicians conspired, and diplomats fraternized.

The prefect approved the proposal, and the avenue Montaigne was born.

Critics recognized the name change for what it was: a whitewashing by neighborhood actors who were bent on socially rebranding the place. The disappearance of Widows’ Alley augured the extinction of the underground in this part of the city, and it left the writer Paul Féval with a bout of nostalgie de la boue that also afflicted some of his colleagues. Féval grumbled that “self-respecting people” would “still call it Widows’ Alley.”10 Before long, he embarked on a career as a successful crime novelist in the mold of Eugène Sue.

1. Le Matin, 18 March 1887. Puy-de-Dôme, Conseil général, Rapports du préfet, procès-verbaux des délibérations: conseil général du Puy-de-Dôme (1874), 133. The Société hippique française kept its headquarters in the rue Montaigne. It was surrounded by a thriving aristocratic culture. During the 1880s the Baroness Decazes-Stackelberg, patron of the art and fashion worlds from a family of Russian ambassadors, was also a salonnière and a pillar of Parisian mondanité. “The success of her receptions—meetings of the high society of France and foreign countries—proves that the charm of a salon has nothing to do with its size,” commented a journalist in Gil Blas (29 January 1884). The baroness’s father was Tsar Alexander I’s representative at the Congress of Vienna after Napoleon’s fall, and her brother was Russia’s ambassador to the court of Napoleon III. Among the regulars at her salon were the Princess Mentchikoff, the Duchess of Sesto, the Duc de Morny, the Marquise d’Aoust, the Vicomte de Kervéguen, the Vicomtesse de Croy, the Vicomtesse d’Argy, the Comtesse de la Ferronays, the Baron Calvet-Rogniat, and “almost all the members of the diplomatic corps” (Gil Blas, 29 January 1884). Others seen there were the minister of Italy in France, General Marquis de Menabrea; the Marquis de Noailles; the Count Léon de Béthune; the Baronne de Beyens; Mme. Borgès; the Baron and Baroness de Heckeren; the Prince de Hohenlohe; the Villar-Urratias; and Mme. Penlaver (Gil Blas, 4 March 1885). Achille de Colmont, Historique de l’incendie du Ministère des finances (24–30 mai 1871) (Paris: De Lapirot et Boullay, 1882), 95.

5. This anecdote is retold by Edward Shorter, Written in the Flesh: A History of Desire (Toronto: University of Toronto Press, 2005), 69.

7. For a basic glossary of the street appellations and related anecdotes in the area around the Champs-Elysées, see Catherine Planel, Mémoire des rues: Paris 8e arrondissement, 1900–1940 (Paris: Parigramme, 2015).