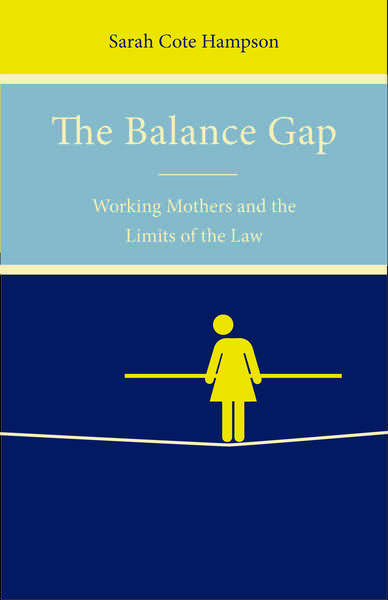 In Pursuit of “Balance”

Natalie is an active-duty major in the U.S. Air Force. Achieving her rank after twelve years of service, Natalie describes herself as “competitive” in her career. She is also a mother of two young children. When it comes to having children in her line of work, Natalie says she talks about her family life with many of her peers but avoids mentioning to her supervisor that she is a mother. “I don’t want people to think that the number of my children or my family life keeps me from being able to do my job. I don’t want, for instance, for that to be held against me that I wouldn’t be able to do a job.”

Yet that is exactly what Natalie says happened to her when she interviewed for a “pretty big job” after having her second child: “I had to prove that I had a nanny for my children and that it wouldn’t interfere with my job.” The job would require a lot of travel, she explains, and the woman interviewing her had expressed concern for Natalie’s ability to balance family with such a demanding professional role. In the end, Natalie didn’t get the job. “I mean . . . now I can see why I probably didn’t need the job, but at the time, and still, you feel a little . . . that because you have children that’s being held against you. To me, I want you to look at my record and if my record speaks for itself, then you should hire me, and I’ll take care of my family . . . because honestly most men when they go interview for a job, they’re not asked how many kids do you have and who’s going to be taking care of them.” Still, Natalie says she “struggles” to find “the right jobs to further my career. . . . I don’t want to hurt my family in doing so.” Natalie says that she is trying to find a balance between her work and her family life that is proving elusive. “I think about that quite often. I’m trying to find that perfect—well, there’s no such thing as perfect—but trying to find that equal ground with both of them [work and family].”

Can women “have it all”? Can women ever truly find a “balance” between work and family? Natalie is not alone among working mothers in America wondering whether she can ever find a way to successfully integrate the domestic and professional facets of her life. Successful women such as Facebook chief operating officer Sheryl Sandberg and former director of policy planning for the U.S. State Department Ann Marie Slaughter have recently weighed in on these questions in prominent media outlets. While this is certainly not the first time Americans have engaged in national discussions about women and work, renewed attention to the tensions between work and family are to be found everywhere, from the pages of the New York Times1 to John Oliver’s HBO news comedy show, Last Week Tonight,2 and, most recently, in the campaign rhetoric of both major party nominees in the 2016 presidential election.3

This public discourse simply mirrors what many women such as Natalie are experiencing as a daily reality. Women feel frustrated by a lack of options for paid leave, high-quality, low-cost child care, and entrenched cultural expectations that converge to create significant barriers to their success in the workplace.

In recent decades, laws and workplace policies have emerged that aim to address some of these problems. Millions of women in the United States take some time off when they give birth or adopt a child using “family-friendly” laws and policies in order to spend time recuperating and to initiate a bond with their children. Such allowances are grounded in federal law (the Family and Medical Leave Act of 1992), state and municipal laws (e.g., California’s Paid Family Leave Law of 2002 or the city of Seattle’s 2015 introduction of paid parental leave for city employees), and individual institutional policies. In recent years, another wave of policies aimed at improving the rate of breast-feeding among working mothers has also taken hold throughout various states. A provision in the Affordable Care Act has brought similar accommodation requirements through federal law, and many workplaces have indeed gone above and beyond state and federal requirements and implemented multiple lactation rooms and on-site support services.

Policies that aim to improve work/life balance are often created with the hope that changes in structural support for women in the workplace will foster social changes to also take effect at work. Activists and policymakers hope that such policy changes will not only increase women’s participation in the workplace but also help women to experience greater overall equity as workers. These policies, however, have thus far fallen short of fully alleviating the tensions that women across the nation are still grappling with as they try to balance their work and their family responsibilities. A recent Pew Research Center survey shows, for instance, that mothers are still far more likely to experience a career interruption than fathers in order to fulfill caregiving work. The study notes that 42 percent of mothers have reduced their working hours in order to care for a child or family member, compared with 28 percent of men, and 27 percent of women reported having quit their job to perform these caregiving tasks, compared with just 10 percent of men).4 Another Pew survey shows that 41 percent of working mothers report that being a mother makes it harder to advance in their careers, compared with just 20 percent of working fathers who said the same.5

Women are also continuing to experience cultural stereotypes at work. Heilman and Chen find that in psychological experiments, women are viewed 14 percent less positively than men if they volunteer to stay late and work on a project and 12 percent more negatively than men if they do not.6 Moreover, Williams and Dempsey note that even women in high-earning professions such as law and medicine continue to be consigned to the “office housework” that includes planning parties, ordering food, and doing other undervalued, administrative tasks.7 These studies reveal that there is essentially a gap between the changes in public policy over the last twenty-five years or so and the degree to which women feel the impact of these policies in their own lives.

Scholars have long studied the gap between the law on the books and the law in action—or, as Kitty Calavita refers to it, “the talk vs. the walk of law.”8 One way of trying to understand this gap is to examine how people come to experience and interpret law on the ground—something known as “legal consciousness.” Exploring the way in which women come to know, interpret, and use these laws and policies in their daily lives can yield important insights into the efficacy of the laws and policies themselves. In order to better understand why work/life balance laws and policies have not lived up to their promise to create significant social change, it is necessary to explore them in action, in the lives of the very women they are meant to affect. If these laws and policies are not easing the tensions between work and family life in a meaningful way for women, then how are women experiencing them?

This book disentangles the factors affecting how individual women come to understand work/life balance laws and policies and how that understanding is then reflected in the decision-making processes of these women around their rights. Recognizing how legal consciousness is formed around a given policy can help to clarify whether a policy is truly effective in achieving its stated goals. In order to do this, I conducted forty-eight in-depth interviews with women in two workplace settings: public universities and the U.S. military. Comparing interview data across these two sites, I explore three dimensions that matter to the construction of legal consciousness: the instrumental, the institutional, and the ideological.

Public universities and the U.S. military are particularly good sites to investigate the significance of institutional culture on the formation of legal consciousness. Both public universities and the U.S. military have unique and easily identifiable workplace cultures. These cultures can also be said to generally transfer from base to base, or from university to university, as part of larger professions. Both are also highly reliant on hierarchical structures and explicitly engaged in forms of public service. For these reasons and others that I explore in the book, these workplace settings lend themselves well to analytical comparison.

This book is ultimately an exploration of the ways in which the individual and the social are connected in the formation and significance of legal consciousness. The institutional comparison provided in this study, coupled with attention to the factors that have an impact on legal consciousness formation, allows me to illuminate this connection. Legal consciousness around work/life balance policies is formed through formal and informal institutional norms and structures, the communication of ideology (in particular, the ideological construct of the “ideal worker”), and individual agency. This book shows that current policies aimed at achieving work/life balance are often proving to be problematic for women’s career advancement, retention, and equality in the workplace.

1. The New York Times ran a four-part series of essays authored by Adam Grant and Sheryl Sandberg entitled “Women at Work” between December 6, 2014, and March 5, 2015.

2. The episode of Last Week Tonight that aired on Mother’s Day in 2015 (May 10, 2015) made the argument that celebrating mothers in America while simultaneously not providing for paid maternity leave is hypocritical.

3. Both the Trump and Clinton 2016 campaigns promised to introduce legislation that would implement paid family leave if elected.