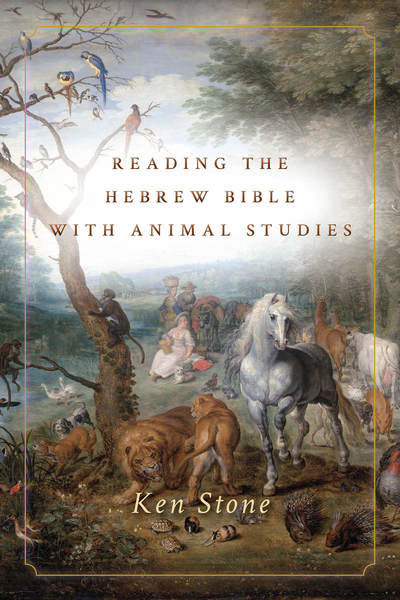 This chapter summarizes previous work on animals in the Hebrew Bible while making a case for reading biblical literature in dialogue with contemporary animal studies.

1 Israel's Companion Species and the Creation of Bibles
chapter abstract

This chapter begins with the role of goat skins in the historical production of biblical scrolls, and in the biblical story of Jacob. Three analytical frames from contemporary animal studies are introduced to explicate the biblical story: (1) the importance of "companion species" relationships, emphasized by feminist biologist and cultural theorist Donna Haraway, and illustrated in Israel's case by flocks of goats and sheep; (2) the instability of the human/animal binary opposition, noted by such philosophers as Derrida; and (3) ubiquitous associations between species difference and differences among humans, particularly, in the case of biblical literature, gender and ethnic differences.

While dogs are the first domesticated animals, their roles in the Hebrew Bible are usually considered negative. This chapter takes a different approach to the Bible's dogs by engaging Emmanuel Levinas's essay "Name of a Dog." Although many writers associated with animal studies discuss "Name of a Dog," only a few emphasize two references to dogs in Exodus that Levinas and his Rabbinic sources engage. By reading these texts together, this chapter highlights complexities involved in the Bible's attitudes toward animals.

This chapter reinterprets biblical sacrifice by engaging Derrida's readings of Cain and Abel, and the Chimera. Although sacrifice is taken as a practice that distinguishes humans from animals, biblical sacrifice simultaneously produces divisions among animals (by making some animals available for sacrifice and others unavailable), produces divisions among humans (by distinguishing humans who can sacrifice from those who cannot), and blurs lines between humans and animals (by raising possibilities for child sacrifice and holy war, and identifying certain animals as substitutes for humans who might otherwise be sacrificed). The chapter also discusses Jonathan Klawans's symbolic theory of sacrifice as a ritual process that draws analogies between domesticated animals and Israelites, and Israelites and God. When biblical sacrifice is read in dialogue with the accounts of Derrida and Klawans, it becomes apparent that biblical sacrifice simultaneously assumes, undermines, and redraws lines among humans, animals, and the divine.

This chapter focuses on the story of Balaam's ass and attempts by scholars to read her story alongside those of other animals in the Hebrew Bible and beyond. Matters of animal ethics may seem distant from this donkey's story, but Jewish tradition appeals to her story to encourage kindness to animals. Since biblical scholars do not agree on how to read her story, or where to place her among the Bible's animals, the chapter considers multiple approaches to the text that allow us to see the story and the donkeys who inspire it in a new light. By allowing for diversity in our interpretations of the Bible's animals, and by paying more attention to the words of the donkey herself, the chapter explores opportunities to move from animal hermeneutics to animal ethics.

Although the Bible's writers lived more closely with domesticated animals, they were familiar with wild ones. This chapter asks how those writers interpreted wild animals in dialogue with sociologist Adrian Franklin's notion of the "zoological gaze." A number of texts understand wild animals as threatening, both literally and as symbols for other threatening forces and situations. Some texts call attention instead to more positive qualities. Many references to wild animals also shed light on the Bible's views about God, and these references can be either threatening or reassuring, depending on the context. A few of these texts, such as Psalm 104 or Job 38-41, indicate that God has direct relationships with wild animals, independent of God's relationships with humans.

6 The Psalmist, the Primatologist, and the Place of Animals in Biblical Religion
chapter abstract

This chapter engages suggestion by some religious studies scholars that animals might be considered religious or theological "subjects" rather than "objects." A number of primatologists, including Barbara King, Frans de Waal, and Jane Goodall, have noted the presence among animals of building blocks for morality, empathy, grief, meaning-making, altruism, justice, and even, in Goodall's case, "spirituality." As strange as such claims may seem, parts of the Hebrew Bible may gesture in a similar direction. The Psalms and other texts represent animals as participants in religion and subjects of praise for God, even affirming that God "saves human and animal" (Ps. 36:6) and judges them as well. Pulling together references from several biblical texts and contemporary scholars, and reading the psalmists and the primatologists together, the chapter reimagines biblical religion as a phenomenon that included animals as well as humans within its purview.

This chapter considers the problem of reading the Hebrew Bible in a world facing dramatic species extinctions. Environmental ethicist Holmes Rolston III once referred to Noah's ark as "the first Endangered Species Project." In dialogue with studies of extinction, the chapter reframes such Genesis tales as those of creation and Noah's ark with prophetic texts such as Jeremiah 12:4 and Hosea 4:3 that understand the disappearance of animals as consequences of human activities. Noting arguments of Thom van Dooren and Donna Haraway that species extinctions compel us to learn to tell new stories, or retell old stories in new ways, the chapter retells the Bible's story of animal life to emphasize the importance of preserving animal species. Although the Bible cannot solve contemporary ecological problems, it may underscore our responsibility for the survival or destruction of other species.