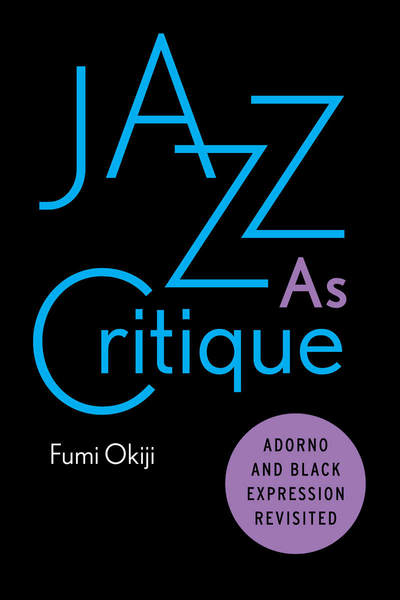 This introductory chapter sketches the broad strokes of the argument that unfolds over the course of the book. A recording of the Charles Mingus Sextet at Cornell University anchors the chapter. In it is heard socio-musical work that appears to instantiate Adorno's ideas of art's potential for providing social theory. It prepares the ground for the extended conversation staged between the critical theorist and black thought and expression.

This chapter seeks to establish the socio-historical basis of an alternate subjectivity, a gathering in difference in jazz, in contrast to the claims presented by some commentators—shown to relate more closely to the historical trajectory of the bourgeois. The inattention of both Adorno and jazz critics to the significance of a distinctive black American subject is shown to be a crucial oversight. It is argued that the notion of personal sovereignty (and its loss) must be seen as subordinate to fundamental everyday, often passive, battles between black life and how society tends to define it beyond recognition, the sequela of the dehumanization of African captives. This distinction is crucial to appreciating the manner in which jazz and other black expressive forms contribute to a model of a possible praxis.

According to Adorno, autonomous works of art, by virtue of their peculiar attuned-outsider perspective, are ideally positioned to provide a kind of social critique. Although implicated socio-historically in the advance of techno-rationality—in fact, because they are so implicated—musical works are able, in rearticulating available musical material, to expose the poor state of human relations within late capitalist society. It is essential to consider black expression's attuned-outsiderness within the specific historical and material conditions from which it emerged. These provide an alternative vantage to that of radical music of the European tradition. Resting on Nahum Chandler's illuminating interpretation of W.E.B. Du Bois's ideas concerning double consciousness, this chapter draws to the fore the importance of African America's contradictory nature, the critical character of its obligatory retention of conflicting positions. The chapter culminates in a discussion of jazz syncopation as a manifestation of this.

3 Black Dwelling, a Refuge for the Homeless
chapter abstract

This chapter frames some key turns of the study's central argument within a universalist inclination in black radical thought and expression. The chapter focuses on the opportunity the disjuncture between blackness and the world presents, and how it allows us to speculate on the broad ethical implications of black living in critical reflection on the world. Black wordlessness and homelessness are put into conversation with Adorno's ethics of resistance, particularly the imploration to not be at home in one's home. It is suggested that an embrace of blackness is a way to give up one's place in the world, and the prerequisite to any utopic future.

This chapter establishes the aesthetic terms of jazz's social character by showing that the tension between wanting to tell communal stories and doing so with distinction permeates jazz work and tradition. Drawing on Walter Benjamin's "The Storyteller: Reflections on the Works of Nikolai Leskov," on black thought, and on the music itself, a descriptive formulation of collaborative work in jazz is advanced. Storytelling in jazz scholarship has traditionally been associated with the linearity and coherence of the individual solo, with values modeled closely on those of the modern European tradition. The inadequacy of such approaches is discussed. The chapter shows how the elision between sound and sense (an evasion of designation but also a refusal to relinquish meaning) enabled black music to continue to communicate content of social significance, despite being faced with traumas comparable to those that have robbed Benjamin's storytelling community of its ability to communicate experience.

5 Postscript: Some Thoughts on the Inadequacy and Indispensability of Jazz Records
chapter abstract

The study concludes with a dialectical riffing on the indispensability and the inadequacy of jazz recording as a representative of the music's principles of structuration. It is suggested that jazz recording is destructive, that it congeals and obscured how jazz work is done and compromises the incompletion, partiality, and imperfection encoded the practice. And yet, jazz records are shown to be of crucial importance to the way the tradition has developed, particularly for how it has democratized study and has facilitated inter-generational collaborations while retaining the features of oral tradition.