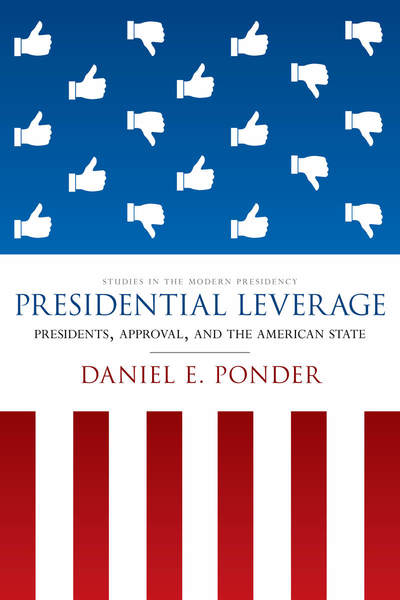 This chapter provides a very broad overview of the concept of presidential leverage and the American state, as well as an overview of the rest of the book. It begins with a vignette on President Obama and the run-up to the 2012 election, defines leverage, and provides other extended examples of the concepts in action. The second example focuses on President Clinton, especially in the aftermath of the 1994 congressional midterms, and illustrates how Clinton's political resurrection stemmed in part from a decline in public trust in government generally and an increase in his approval ratings. These vignettes illustrate the various components of the IPL and introduce the reader to the conceptual thinking behind leverage and the construction of the index.

2 Presidents, Approval and Trust: Toward a Concept of Presidential Leverage
chapter abstract

3 The Quest for Presidential Leverage: The Presidency and the American State
chapter abstract

This chapter employs the concept of the "American state." For most people the president is the personification of the American state, though he has relatively few leverage points outside of a few constitutional provisions to help him. Though the Constitution establishes Congress as the most powerful branch, an institutional inversion has taken place that has effectively reversed the constitutional scheme and has led to increased expectations on the presidency without an appreciable increase in governing authority for the president. The argument is that presidents seeking leverage points in the American state, which is characterized by a public that is largely antileadership and skeptical of efforts to forge policy direction, can build capacity and seek autonomy to help cope with expectations heaped on them. The theme of this chapter—how public leverage signals when presidents can or should act autonomously and/or build capacity—is woven throughout much of the book.

This chapter explains the measurement methodology and traces trends in the index of presidential leverage (IPL). It provides a broad, panoramic view as well as president-by-president explanations of approval, trust, and the IPL for Presidents Kennedy to Obama. The analysis breaks down the IPL a number of ways, including but not limited to pre- and post-Vietnam/Watergate eras. The chapter explains measurement decisions, including estimation techniques such as the employment of James Stimson's WCALC algorithm to construct the approval and trust measures.

5 Presidential Leverage and the Creation of Public Policy
chapter abstract

This chapter explores the macropolitics of policy output and its relation to presidential leverage and examines three types of macropolitical policy activity: presidential legacy, unilateral policy making, and agenda size. These include the size of the president's agenda, encompassing all proposals (1961–2004), and high salience policy (operationalized in two ways via the State of the Union speeches from 1961–2012), and draw on two different data sets. Specifically, the IPL is systematically related to the success of landmark legislation that originated in the White House (as opposed to Congress) and calculated from the list composed by David Mayhew. Executive orders are also significantly related to the IPL, as are requests in the State of the Union. Presidential leverage is a significant improvement over using raw approval scores in the statistical analyses in both legacy and unilateral models and is approximately as strong as approval in the agenda size model.

This chapter explores capacity and autonomy. It builds on the author's previous book, Good Advice: Information and Policy Making in the White House, to empirically examine the role of leverage in building capacity (measured as employees in the Executive Office of the President) and centralizing policy making in the White House. For centralization, a robust relationship between leverage and centralization is thoroughly explored and explained. Specifically, the analysis shows that weaker, less advantageously situated presidents (as identified by the IPL) are more likely to centralize policy making in the White House than those with higher degrees of public leverage. Using time series error correction models and controlling for a variety of institutional and economic factors, another analysis finds a limited but statistically significant relationship between leverage and political capacity in the politicized staff in the Executive Office of the President.

7 Conclusion: The Place of the President's "Place" in American Politics
chapter abstract

This chapter concludes by reviewing the major findings of the book. It systematically lays out the reach of the theory while also including a discussion of the book's limitations (for example, leverage seems to have little to do with the degree of congressional concurrence with the president's program or with the content of the policy agenda). It briefly reviews where presidential leverage outperforms measuring approval in isolation. Finally, it offers final thoughts of the nature of the presidency in the American state and how leverage can offer scholars a supplementary, alternative way to examine the context within which presidents take action. It also outlines prospect theory as a tool for future research that combines leverage with decision analysis. It brings the analysis up to date with a set of observations in light of the 2016 presidential election.