STANFORD
UNIVERSITY PRESS
A Unified Theory of Cats on the Internet
E.J. White 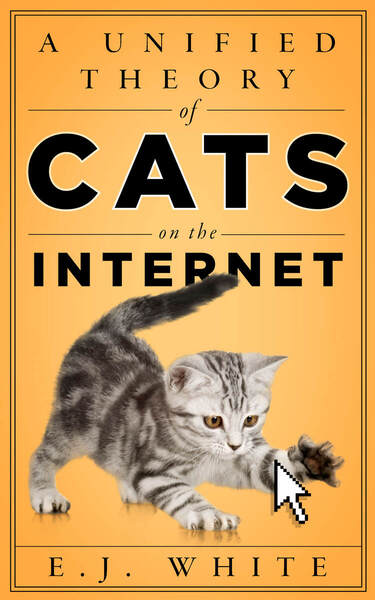 A Unified Theory of Cats on the Internet
E.J. White

This chapter establishes the terms of the mystery that the rest of the book explores: how and why the world came to believe that cats are the "spirit animal" of the internet. While the triumph of cats on the internet is a measurable fact, it is also a myth: a signifier that carries remarkable force in the marketplace of attention. Cats are a symbol of pointless online sociability; so the reason that we needed a symbol of pointless online sociability—that its prevalence came as a surprise to all who had "for so long heard about the coldness and impersonality of the computer"—is worth keeping in mind. Astonishing to early observers of computing, pointless online sociability became a major force driving the development of the internet: not an epiphenomenon, but a root cause.

This chapter examines the long history of making cats suffer as a form of entertainment. We no longer massacre cats for fun, but even today, the torment of cats in fiction is acceptable sport.

One of the first recorded instances of mass trolling on the internet was an attack on a forum for cat lovers whose regulars were mostly women. That the women of the cat lovers' forum could seem like outsiders to be pushed from the internet was the outcome of a long semiotic and cultural history that demonized cats, as well as a complex series of gender reversals in the history of computing.

This chapter explores the significance of cats in the subcultures that helped to set down the social protocols of Web 2.0. The communities that laid the social foundations of the meme culture saw themselves as inhabitants of the periphery as opposed to the mainstream; the ascendance of the cat as the mascot of the internet relied on a view of the internet as a snarky, alienated alternative to the mainstream. These communities included many Americans who were fascinated with Japanese culture, which further drove the popularity of cat memes on their boards; meme culture has deep roots in japonisme.

The history of internet cats can be divided into three periods: the webcam and personal blog era; the meme era; and the celebrity cat era. The rise of celebrity cats answers a question about internet economics that economists and media theorists have been debating for decades: whether the internet will flatten the playing field so that a few superstars no longer reap most of the consumer demand in a given area. As it turns out—and as Anita Elberse shows—in the digital marketplace, superstars are more important than ever: although the long tail is lengthening, in the sense that unpopular items are finding buyers, superstars are gaining a larger proportion of total sales.

When I started work on this book, I was Not a Cat Person. But I try to be thorough, so once research was underway, I reached out to a shelter in Brooklyn and asked to foster a kitten. Reader, I kept him. It's humbling to like a cat after complaining so much about them. I'll go further and say, since my dog can't read, that I'm probably a cat person. Having been reminded so pointedly that I can't predict the turns in my own life, I should refrain, I think, from pretending that I can say much about the future of the internet. Yet we can likely be confident that whatever turns the internet takes, the tubes will remain cat-shaped: frivolous, subversive, cute, mean, and weird, with communities of users fighting endless battles over the imaginary heart of the web, and with play and politics in perpetual mutual reinforcement.