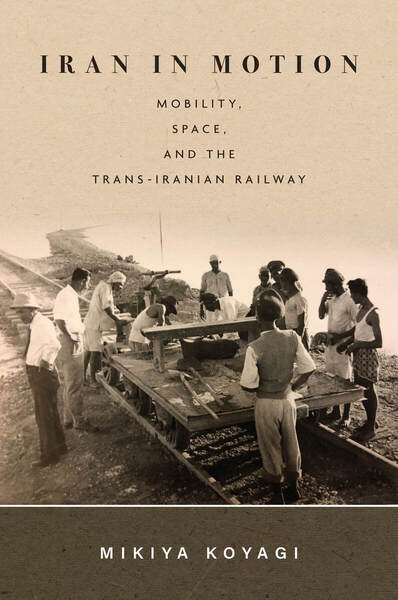 The introduction provides an overview of the book. Rather than seeing the Trans-Iranian Railway exclusively in the context of national integration under an authoritarian state, this book analyzes the project as a series of contestations over mobility and weaves together multiple interconnected stories. The introduction explains that this book uses the concept of "mobility" both spatially and qualitatively to study physical movement, such as travel and migration, as individual embodied experience. By taking this approach, it shows how the railway project reorganized the movement of the nation in both senses, which in turn produced new spatial categories and differentiated mobile subjects. This story is situated in studies of globalization, infrastructure, and space. The introduction's last section provides brief summaries of the seven main chapters.

Chapter 1 focuses primarily on British imperial officials prior to World War I to examine their visions of redirecting the flow of goods through infrastructural projects. It argues that the various trans-Iranian railway projects that they proposed were intended to reshape space transimperially. As such, the main goal was to link Europe with Asia through railways and steamships, and Iran's significance lay in its location between Europe or Russia and India. Importantly, the perceived strategic interests of the empire were not the only reasons British officials advocated such reshaping of space. Rather, their goals were couched in the language of a civilizational project to revive Iran's lost status as the corridor between East and West.

2 The Road to Salvation
chapter abstract

Chapter 2 discusses railway imaginations among Iranians between the 1860s and World War I. It argues that nationalist discourse came to define a trans-Iranian railway as a measure to create a Tehran-centered national space, in contradistinction with imperial railway projects that sought to incorporate different parts of Iran into imperial spaces. This chapter also illustrates that it was Iranian encounters with railway technology in neighboring countries that shaped ideas about the role of the state, the relationship between railways and preexisting modes of transport, the purpose of building a railway, and other contentious issues. The first two chapters together highlight the importance of adopting a spatial framework that goes beyond Iran and the West.

Chapter 3 examines the convergence of imperial and Iranian railway imaginations in post–World War I Iran. Drawing on Majles proceedings, the Iranian press, and railway station architecture, this chapter demonstrates that through the railway project the new Pahlavi state attempted to produce a national territorial space with its own distinct economy and culture.

Chapter 4 reviews the construction phase, which produced mobilities in the forms of displacement, transformation, and reorientation. Mainly based on petitions submitted to the Majles, the first example documents how the much-fanfared mobility by rail depended on the displacement of agriculturalists. The second example examines how the Pahlavi state tried to transform the mobility of tribes into a predictable, routinized mobility of laborers to maximize productivity on construction sites. The third example demonstrates that early operators of the Trans-Iranian Railway were products of the prior transnational circulation of Iranian labor in Iran's neighboring regions. Thus, the railway project reversed the direction of labor flow. Taken altogether, the three cases suggest that the creation of an infrastructural system changed the qualities, scales, and directions of mobilities. Importantly, the production of mobilities during railway construction did not center around Tehran. Movement was generated in multiple directions, originating in many locations.

Using industry publications and American archival documents from the Allied occupation period, chapter 5 focuses mainly on railway accident prevention measures to illustrate that railway operations required a perfect alignment of sociopolitical, technological, and environmental pieces. The material structure of the railway alone was insufficient to achieve the production of safe, speedy, and stable movement of trains. Seeing speed as corruptible through human behavior and perfectible through human endeavor, technocrats of the IRO and the Allied forces tried to contain its danger by reforming the embodied practice of movement among workers. They enacted safety regulations and sought standardization in many realms, specifying mundane physical motions of workers for particular procedures. The chapter also suggests that workers were not passive objects of reform but used their knowledge of the infrastructural system for goals different from those of technocrats.

Chapter 6 focuses on the objects of technocrats' reform: railway workers. In the postwar period, the IRO implemented various measures to cultivate a sense of corporate loyalty among Iranian railway workers, including redirecting workers' everyday mobility around company housing and socialization spaces. Simultaneously, however, workers themselves began to assert their rights as national citizens. This chapter highlights ways in which railway workers valorized national-scale migration to lay claim to the status of the most self-sacrificial citizens of the nation—all the while discrediting other scales of migration by other workers. These movements led to the production of a workforce differentiated by rank, provincial background, and nationality.

In chapter 7, themes of space, practice, and subjectivity fully converge. Railway passengers continued to shape new subjectivities as they made mundane bodily motions within the railway space while moving across provincial, national, and transnational spaces. Rather than creating a homogeneous, Europeanized experience of railway journeys as desired by advocates of the New Civilization, encounters in the railway space produced differentiated traveling publics who identified with local, national, and transnational communities simultaneously. Thus, the Trans-Iranian Railway not only integrated the nation but also fostered new connectivities that transcended the nation.

The conclusion summarizes the main arguments of the book, with a focus on the unevenness of redistributing mobilities through the railway project. It also considers the need to reframe chronology in Iranian historiography, followed by a note on the continued importance of rail infrastructure in Iranian politics today.