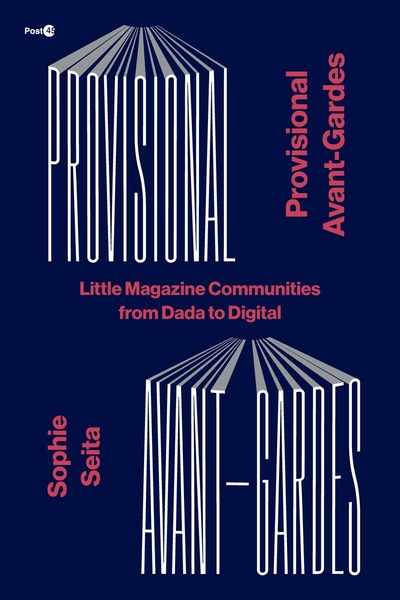 The Magazine as Laboratory in New York Proto-Dada Communities

Ezra Pound’s essay “Small Magazines,” published in The English Journal in 1930, established programmaticity and self-theorization as the signatures of the periodicals in which literary avant-gardes incubated: “periodicals in incubation can only be judged on their programs. . . . A review that can’t announce a program probably doesn’t know what it thinks or where it is going.”1 Indeed, magazines and groups that lacked programs have either been excluded from histories of the avant-garde or have been discussed within a framework that simply does not apply to those communities. Conversely, Alfred Stieglitz described 291, a magazine that appeared through his gallery, by its very divergence from a consistent program: “‘291’ is always experimenting.”2 Dada is conventionally framed as a cohesive avant-garde movement that sports programmatic manifestos proclaimed by its most prominent figures—a narrative still dominated by originality myths despite the demolition of genius often ascribed to Dada. While Dawn Ades claims that “the centrality of [Dada’s] little magazines to the many-headed phenomenon of Dada is well known,” both studies and popular opinions of Dada tend to privilege the successful magazines, artists, and writers who have entered the canon, not necessarily questioning the ways in which we theorize avant-gardes around such figures and programmatic outlets.3 The proto-Dada little magazine was a laboratory: it did not always “know what it thinks or where it is going.”4 As such, it serves as a test case for a new theory of the avant-garde: how can the avant-garde be adequately described as a print community in all its provisionality and complexity, and how can such an approach to Dada set a precedent for later and contemporary avant-gardes?

This allegedly ur-avant-garde movement may be examined afresh by reading four American magazines that were never entirely Dada: 291 (March 1915–Feb. 1916), The Blind Man (April–May 1917), Others (July 1915–July 1919), and The Little Review (March 1914–May 1929).5 All were published in New York City either exclusively or frequently, and they shared a number of contributors, some of whom would become known as Dadaists and many of whom frequented the same avant-garde circles, galleries, and salons. The convergence of proto-Dadaists in New York in the 1910s and early 1920s was no coincidence. A center for publishing since the nineteenth century, the city attracted artists, writers, intellectuals, and radicals from all over the world, especially those fleeing the war in Europe, creating an abundance of aesthetic practices—an abundance strikingly evident in little magazines.

Others: A Magazine of the New Verse was edited by Alfred Kreymborg out of Ridgefield, New Jersey; New York; Chicago; and then again New York. Helen Hoyt, Lola Ridge, William Carlos Williams, and Maxwell Bodenheim variously acted as associate or guest editors. Other contributors included Djuna Barnes, H.D., T. S. Eliot, Amy Lowell, Marianne Moore, Ezra Pound, Man Ray, Carl Sandburg, and Wallace Stevens. Others is often compared to Chicago’s Poetry, where Pound served as foreign editor and which he offered as an example of a functioning magazine thanks to his own intervention in the “Small Magazines” essay mentioned above. Unlike Poetry, Others quickly became known as one of the most politically and aesthetically radical magazines of its day. The contributors often met at Kreymborg’s shack in Grantwood, New Jersey, and at avant-garde salons in Greenwich Village.

These four magazines and their contributors have sometimes been grouped among the “first” American avant-garde. They have also sometimes been called, in constellation with other magazines, “New York Dada” or “proto-Dada.”8 Other terms, such as Futurism, simultaneism, cubism, modernism, and simply modern, were often used or ridiculed interchangeably by magazine contributors themselves.9 By calling these magazines proto-Dada, I do not wish to imply a teleology toward the arrival of monolithic Dada but hope to identify a provisional network of practitioners with multiple affiliations who sometimes engaged critically and creatively with the practices of Dada, though not necessarily under that name.

The principal features of canonical Dada are often taken to be humor, chance, indeterminacy, irony, negativity, use of ready-mades or found objects, machine art, anti-art, irreverence toward the art world, rejection of the autonomous artwork, disgust, irrationality, and nonsense. Peter Bürger famously declared, “Dadaism, the most radical movement within the European avant-garde, no longer criticizes schools that preceded it, but criticizes art as an institution, and the course its development took in bourgeois society.”10 Bürger defined Dadaism by its intention, which was given material form in an (anti-)aesthetics of montage, collage, and chance procedures. Through close examination of the little magazines from the period, several of these posited political and aesthetic characteristics will prove flawed as historical descriptors; in other cases they make sense only when read as the products of collaboration, dialogue, or self-fashioning within magazines.

The Cabaret Voltaire is typically recognized as the birthplace of Dada and its venerable founders as the first Dadaists. As the contemporary American poet and painter Marjorie Welish puts it humorously in her poem “Wanted”: “Dada ‘was officially christened’ on 5 February 1916. / vs / Yes but.”11 It is often argued that Dada was “largely a European phenomenon, which was transplanted into an American context,” an account easily rectified when we observe that the group associated with New York Dada was active before Tzara’s christening of “Dada” and when we trace its influence on the transatlantic avant-garde network through which magazines such as 291 traveled among groups.12 When Francis Picabia contended that “Dadaism was invented by Marcel Duchamp and Francis Picabia—Huelsenbeck or Tzara found the word Dada,” he offered an exemplary statement of self-fashioning Dada historiography and a purely male lineage.13 Likewise, critics have described Duchamp as the “leader” of New York Dada.14 Such playful origin myths highlight how the formation and canonization of group identities are based on selective inclusion. Putting the spotlight on these (often gendered) processes is important revisionist work necessary to a fuller understanding of every avant-garde group.15 Sometimes the proto-Dada magazine community was—contrary to Pound’s dictum—radically indecisive and nonprogrammatic; at other times it fashioned a narrative that has affected our understanding of Dada and the avant-garde ever since.

One way to describe proto-Dada print communities without taking group hierarchies as fixed, or taking programs at face value, is to return to their moments of “incubation” and explore the dynamics of group formation and self-definition in magazines. The magazines 291, The Blind Man, Others, and The Little Review were laboratories—a term some magazines used themselves—for new typographies, verbal and visual collaborations, dialogues with each other and the public, and experiments that foregrounded the medium of the magazine itself. Editorial interventions, correspondence, and social gatherings contributed to the formation of a community of print and beyond. But communal longevity, inclusivity, or certainty was vexed. As many rude reviews and editorial rants imply, collectivity necessitated a willingness to disagree. By developing new critical languages to articulate their artistic innovations and views on group formation, these magazines allow us to reflect on our own reliance on these discourses today, setting the terms with which we now discuss avant-gardes, from experimentality, programmaticity (or lack thereof), provocation, and anti-institutionalism, to consistency. In this way, proto-Dada print communities help us trace an avant-garde lineage based on the medium of the magazine and to recalibrate avant-garde criticism.

6. The variant spelling of “The Blindman” seems to be the result of Alfred Frueh’s cover drawing. The editors themselves refer to The Blind Man, so I will use that spelling throughout. I describe the magazine’s production and reception history, its editorial practice, and contributions in my essay “The Blind Man Sees the Fountain: New York Dada Magazines in 1917; An Introduction,” in The Blind Man, facsimile edition (New York: Ugly Duckling Presse, 2017).