The Making of Illiquidity in Macedonia

WINTER 2017. Fog descends on Skopje like a deadly but merciful veil. A spectral glow illuminates the streets for the few office workers walking quickly between buildings along the city’s main arteries. Behind black, air-filtering masks, blue, brown, and green eyes intermittently emerge. Cafes are open but empty—like deep sighs between regular breaths. In the smog, buildings appear and disappear slowly, their silhouettes scrambled into a thousand imaginary shapes.

When Skopje regains its senses, it is not a relief. Neo-baroque façades spread like plastic parasites on the skeletons of socialist buildings. Bronze statues of national heroes reverberate the sound of footsteps—echoing hollow promises of a grand future that are belied by the fragile shapes of decrepit schools and hospitals. A small triumphal arch points toward a patch of cramped new buildings that have mushroomed in the eastern suburbs—a win, perhaps, for the oligarchs and the government that sponsored Macedonia’s urban expansion. For inhabitants, contractors, and citizens, it is a disquieting testimony to their mounting debts.

Wounded, tired, doubtful—contemporary Skopje is recovering from a ten-year-long construction hangover. Announced in 2010, the wave of urban expansion known as Skopje 2014 was supposed to keep Macedonia’s economy afloat during the international recession that had followed the 2007 US mortgage crisis—an economic turmoil that, over the following decade, froze international credit markets and produced several mortgage and sovereign debt crises in Europe. In theory, the sovereign loans that subsidized the Skopje 2014 plan constituted an investment that would prevent the spread of financial instability in Macedonia, put the country on the map, and attract global capital. In practice, few companies ever saw any cash. Money seemed to evaporate before reaching local businesses. Bills, however, did not. 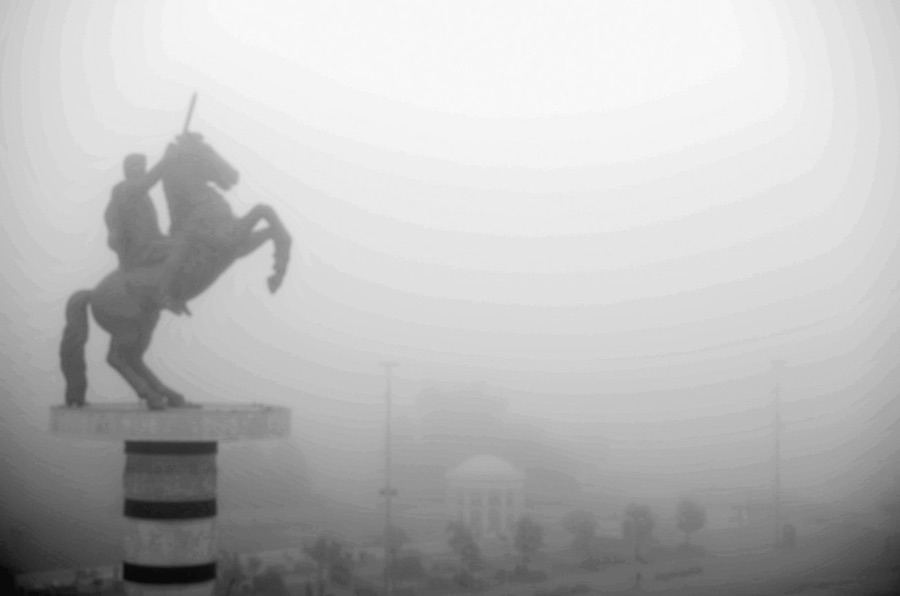 As in many other global metropoles, the spirals of credit that made Skopje 2014 possible originated in the pool of liquid investments that sustain the financial architecture of contemporary capitalism. Yet the timing was odd. Global lenders had taken an interest in Macedonia precisely at a moment when investing in construction all around Europe was considered unwise. More important, their lending seemed to be targeting public agencies rather than following the same indiscriminate patterns observed prior to the global financial crisis. Paradoxically, the Macedonian government amassed debt and, in theory, cash to spend, but Macedonian businesses and citizens found it hard to get loans from private banks or even to be paid from public agencies. For them, Macedonia was not a land awash with cash. Instead, it felt like a country plagued by illiquidity and exploitative working conditions.

For those who had engineered the neo-baroque façades of Skopje 2014, however, Macedonia’s construction and financial expansion had been highly lucrative. Between 2006 and 2016, Nikola Gruevski, Macedonia’s prime minister; his cousin Sašo Mijalkov, head of the country’s intelligence agency; and a tight circle of politicians and oligarchs leveraged the resources provided by international finance to seize assets and solidify their grip on Macedonia’s state and society. The beat of sledgehammers covered networks of racketeering, forced acquisition, political violence, arrests, indiscriminate wiretapping, and intimidation. With each euro that went into Skopje’s urban spaces, Gruevski’s regime acquired a physical presence—appearing to be strong, real, and inevitable.

Squeezed between a lack of money and an oppressive regime, most Macedonians felt powerless. Gruevski, by contrast, seemed untouchable, able to control the country’s economy and parry any protests or scandals. Even when, in 2015, the opposition released tape recordings that exposed the regime’s crimes, Gruevski and his party, the Internal Macedonian Revolutionary Organization–Democratic Party for Macedonian National Unity (VMRO–DPMNE), held on—emerging as the strongest party in the 2016 elections, only a few seats short of a new majority.

And yet, when the regime seemed primed to survive yet another crisis, it suddenly fell apart. Determined to prevent a (fragile) coalition from creating a new government, the VMRO–DPMNE tried to stall, boycott, and ultimately physically occupy the Macedonian Parliament by enlisting the help of an angry mob of thugs and overzealous nationalists. In the chaotic moments of violence that followed, rumors of a coup spread like wildfire. Panicked friends and interlocutors called me in New York. They feared the army would support the regime, and they expected the president of Macedonia, Gjorge Ivanov, a close ally of Gruevski, to declare martial law. A few chaotic hours passed, yet nothing happened. In his speech, Ivanov called on everyone to remain calm. Gruevski, from Vienna, followed suit. Finally the police intervened, removing pro-VMRO–DPMNE protesters—and thus the aura of invulnerability that had surrounded the regime evaporated.

How did Gruevski’s regime manage to subjugate the hearts and minds of Macedonians and yet crumble so rapidly? And if the regime was so powerful, why did it prove to be incapable of inciting overt, large-scale political violence when it mattered the most? This book suggests that the pervasive and fragile dimensions of Macedonia’s authoritarianism are directly connected to the forms of financial expansion experienced at the European periphery. The ethnography of the Macedonian construction sector I put forward argues that Gruevski’s regime flourished thanks to the geopolitical value that a small, peripheral country such as Macedonia acquired during the global financial crisis. Able to access financial resources during the global credit freeze, Gruevski wove complex layers of financial dependency into the urban landscape.

In the rebuilding of Skopje, financial schemes of forced credit and elusive wealth became entangled with the formal and existential processes at the core of Macedonia’s political life. Rather than being a function of calculative devices or liquid capital, finance expanded through the intersections and struggles of a plurality of actors. Financial flows followed the power play of figures such as Gruevski, who was able to hijack both the expectation of profits held by global financial actors and the desire for recognition expressed by Macedonian citizens. The result, in a country subject to a legacy of financial marginality, was a specific kind of illiquidity in which credit relationships expanded but the flow of money remained centralized and restricted. For a decade, illiquidity allowed the Macedonian government to monopolize the money supply and force businesses and individuals to embrace illiberal politics. Amplifying rather than resolving the financial exploitation felt in Macedonia, illiquidity disguised the regime’s structural dependencies—until the regime was no more.

Embarking on a journey with failed entrepreneurs, indebted workers, and aspiring bureaucrats, this book shows that the expansion of finance at Europe’s margins transformed identities, values, and economic hopes into means of subjugation. Each chapter offers an exploration of a different site where finance and politics collided and intertwined. The narrative chronicles how Macedonia’s authoritarian regime rode a wave of financial expansion to deepen its reach into Macedonian society, only to discover that, like other speculative bubbles, its domination was always on the verge of collapse.