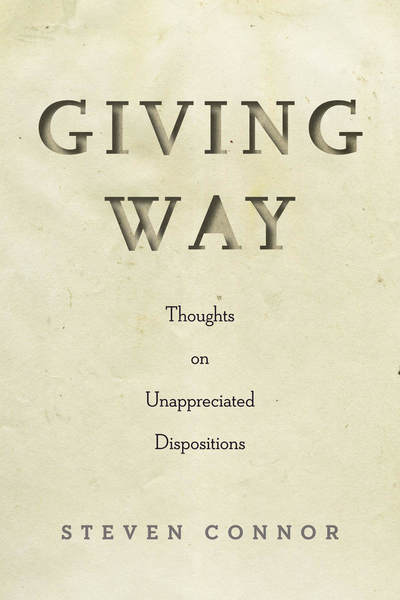 This chapter characterizes the idea of giving way that will be in play throughout the book and offers representative discussions of the currently undervalued virtues of submission, humility, resignation, mercy, and remission, the last being applied not to the forgiveness of wrongdoing or reduction of penalty but to the abeyance in the ever-growing demand for communication exerted in contemporary media. Giving way is related to the development of civility, in that its aim is principally to restrain or deflect violence. So giving way is not a way of life but a way of recognizing the styling of life as such, through the principle of what is called modulation through the book. The proverb "manners maketh man" is an observation not just about the importance of good manners but about the importance of manners in general. Manners are modulations, and modulation is the whole work of social life.

This chapter explores the nature of politeness, focusing not so much on its various forms but on its work averting threat and binding parties into awareness of the work performed by politeness itself. Robin Lakoff's three maxims of politeness, Don't Impose, Give Options, and Be Friendly, are discussed and reduced to the making and manipulation of symbolic space and "intimate distance." Polite discourse is characterized as discourse governed by the modulating qualification or socializing weakening of speech acts. The important role of laughter in polite social relations is explored through a discussion of Norbert Elias's uncompleted essay on laughter, which allows for the recognition that laughter exists in order for us to demonstrate our helpless submission not just to others but also to social relations themselves. The chapter concludes with a discussion of the function of saying "please," linked to the giving of social pleasure, and "thank you."

This chapter extends the discussion of good manners through a discussion of the work of posture and gesture in social relations. It is argued that gestures form a complex language that balances tolerance and intolerance of the presence of other creatures and correlates the active desire to occupy space with the willingness to share or surrender it. Making use of the work of Erwin Straus, Sander Gilman, and Adriana Cavarero, the chapter considers uprightness and the modes of abasement or inclination away from the upright, along with variations in the action and ideas of standing, bearing, and carriage. The relations of gesture to gesticulation, concentrated in the fingers, are studied, along with the relations between gesture and speech. It is concluded that gesturing creates a shared space, which it substitutes for the actual physical space inhabited by interlocutors, in an act that is described as "copropriation."

This chapter considers the socially binding functions of refraining, abstinence or abstention. It offers discussions of the roles of hairstyling, self-starving, and moderation of diet in the formation and sustaining of human communities. It is argued that abstinence may often have a role in the formation of a temporal economy, in which past, present, and future are bound together by a rhythm of privation in the expectation of reward, or in ritual practices like days of "National Humiliation." The chapter considers the political uses of abstinence in collective withdrawal from productive labor in the action of striking, making use of the arguments of Georges Sorel. It concludes with reflections on the social function of inhibition, especially of sound, in evolutionary history, employing Robin Fox's proposals concerning the human "inhibitory drive."

This chapter considers the kinds of retraction, self-demotion, or standing down that is involved in different kinds of apology and that might be involved in the demand for apology, and the unexpected kind of psychological reward that might be offered to or obtained by the one who offers an apology. The chapter's particular concern is with the question of public apologies, as issued increasingly in recent years by heads of state or other institutional representatives. The central argument is not that such public apologies are wrong but rather that they are necessarily absurd, in that they are impersonations of a state of mind and moral feeling that it is not possible for a collective institution to possess. This is contrasted with the genuine work performed by apology in ordinary life, a work that can be authentic even if the apology is not sincere or strongly meant.

This chapter explores the behavior associated with bearing loss, or "losing well," which, with the extension of game and competitive play activity, has become one of the most widespread of formalized modes of actively giving way. It argues that formal competition not only ritualizes losing; it also, and for that reason, makes it something that is likely to be undergone in public and therefore to have an exemplary character. The chapter considers the ambivalence of losing, which may always allow for the possibility of unloosing or abandoning, and considers its relation to the kind of loss involved in bereavement and grief and the way in which this work is formalized in literary elegy. It concludes with the largest experience of loss of all, the loss of existence in death, and the ways in which this loss is modulated through the ars moriendi, or art of dying well.

This chapter explores aspects of caring, beginning with the way the word care has moved from meaning sorrow or trouble to fondness or attraction, making caring a complex mixture of self-abatement and self-enlargement. The asymmetric demands of care on females are discussed, in relation to increasing efforts to "outsource" caring responsibilities to professions and institutions. The central role of care, as Sorge, in Heidegger's philosophy is appraised. The impulse or duty to self-care in the ancient world and beyond is considered, and it is argued that human care is reflexive, in the cherishing concern that humans show with the quality of their own caring. The chapter focuses on animal domestication and keeping pets, which makes nonhuman animals the objects of human care and concern, and explores the aesthetics of cuteness, suggesting that, in evolving from aggression to communication, human beings may have been evolving toward the cute.

The Conclusion reviews the arguments about giving way assembled in the foregoing chapters, in particular in their relation to gender identifications and expectations, arguing that we should not assume that inhibition and self-limit exist only or principally to secure gender differences, rather than vice versa. Although this book is not intended as a campaign for an increase in civility but as an investigation of the expertise in civility embedded in all social arrangements, it is suggested that this expertise may be an important resource in helping develop the global civility we may need to develop in relation to our threatened and threatening natural environment. Drawing on Michel Serres's arguments for the "codomestication" of humans and their environment, the chapter concludes that, if we are to negotiate a self-preserving truce with the natural world, we will need to draw on and develop our powers of self-limitation.