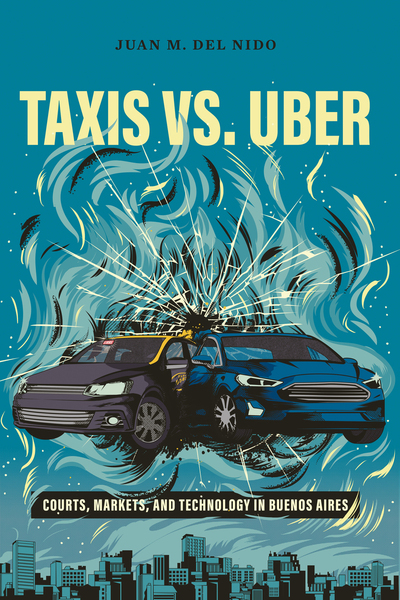 This chapter introduces the book's main argument and theoretical approach. In the political, economic, legal, and cultural conflict that followed Uber's arrival in Buenos Aires, Argentina, the taxi industry found itself and its arguments progressively written off from the public sphere where things can be rightfully and meaningfully debated: the industry became, in Rancière's terms, "the part that had no part." This process resulted from the emergence among a certain middle class of what I call postpolitical reasoning: the logics, rhetoric, and affects that people mobilize to imagine, legitimize, and argue for a common experience where a certain kind of disagreement is foreclosed. The chapter characterizes postpolitical reasoning, discusses the historical configuration of this middle class, and reviews methodological and ethnographic considerations.

This chapter examines what Buenos Aires taxis are by studying the taxi license, a government-issued permit rendering the transaction intelligible in a certain way and organizing industrial, political, economic, and labor relations in the trade. It shows how in 2001 Omar Viviani, the taxi drivers' union leader, used the taxi license to consolidate the union's power. Epitomizing the charisma, audacity, and skill of Peronist leaders in the Argentine political imagination, Viviani was by 2015 running for Parliament, which influenced how the middle class, taxi users, and taxi drivers understood the relationship between him, the union, national politics, and the possibility of Uber's arrival.

After an accident in 2013 involving a taxi driver, the industry and the city government deployed several techniques and rationalities turning taxi drivers' bodies into the object of a specific attention and rendering them intelligible in a particular way: that is, problematizing them. Problematizations are a political exercise involving exclusions, hierarchies, and prioritizations to produce an order. This chapter studies how an array of classes, health examinations, and interactions with the industry and its authorities reproduced the political, economic, and labor relations within the trade. This problematization matters, not as a "truth," but rather as a means of understanding who entered the taxi industry, how they stayed in it, and the perspective from which the industry would attempt to resist its exclusion from debate when Uber arrived.

3 A Most Perfect Kind of Hustling
chapter abstract

This chapter examines how the panoply of governmental markers that makes each taxi unique, from taxi license numbers to car plates and standardized colors, makes them completely interchangeable in the cultural practice of riding a taxi. Taxi drivers and their passengers treat each transaction as an event with no past and no future, and thus as infinitely elusive in terms of accountability, responsibility, reputation, and other considerations that would tend to pin transacting parties down. From the perspective of taxi drivers, an ethical disposition emerges along the maxim "If you seek, then you shall find." From the perspective of the passengers, a constant suspicion of being cheated or subjected to opportunism and guile passes for confirmation of the many vices they associate with the industry, setting their role in this shared experience as those who are taken advantage of.

Immediately after Uber launched its service in Buenos Aires, the taxi industry initiated legal action against it, accusing it of several abuses and violations through the language, techniques, and spaces of law, where decisions are legitimate because the judicial domain is by definition exclusive, hierarchical, and representative. Meanwhile, part of the middle class was convinced "the people" wanted Uber and should therefore have it. In late capitalism, popular choice is the site of a raw, moral legitimacy that trumps the political by producing gladiatorial truths: prescriptive truth claims based on the moralizing bottom line of minimally mediated popular legitimacy, measured in actual vocal support or its late capitalism proxy, consumption. Gladiatorial truths obscure rationalities, processes, and techniques of production, subsuming any political economy considerations to the bottom line of consumption.

5 The Stranger That Stays as Such
chapter abstract

Uber framed its activities in Buenos Aires as a complement to the taxi industry and as an "innovation," therefore beyond the scope of transportation laws. Yet the middle class saw Uber and the taxi industry as competitors locked in a structural opposition guaranteed by the company's condition as an outsider. I argue that Uber worked as an economic version of a stranger king: an outsider with its own motivations but impartial with respect to conflicts framed as political and local. Uber was understood as impervious to the Argentine logics of the alleged taxi "mafia" that had presumably co-opted police, city administration officials, and others in its self-perpetuation, materializing the trope of competition as an economic solution to a political problem.

This chapter shows that Uber relations were intelligible to users through supply, demand, fare multipliers, and other tropes of economic reasoning that produced the experience of an ordered, orderly order. This order worked through unverifiable, indeterminate propositions that could not be engaged on the grounds of disagreement: they worked as portrayals one acted on or not, rather than as arguments one could take to task. I argue that these are the logics of a phantasmagoria: generating relations and the means to engage in, and understand, these relations. What was with the taxis a problem of order and shared knowledge, a political problem, was now an individual, subjective problem beyond interrogation. This transformation peaked with the consolidation of an undefinable "passenger experience," impossible to meaningfully order, perpetuating the illusion that animated it in the first place: that an order that was not political was possible and within reach.

7 The Political on Trial
chapter abstract

When a Buenos Aires judge banned Uber's activities, the company refused to interrupt its operations. As an industrial conflict became a matter of contempt of court, the justice system began several attempts to single out and extirpate Uber from its jurisdiction. They all proved unsuccessful; whereas the justice system saw in these failures technical hurdles to its prerogative to determine what kinds of relations were legitimate in Buenos Aires and how, among the middle classes they played out as successive trials of strength, where Uber's triumph passed for evidence that the company and its transactions were "beyond" the city's political order. In this view, legal and political action should work with the flows of these relations, rather than against or beside them, effectively neutralizing the possibility of framing these relations differently.

After twelve years of "hyperpoliticization," Macri's coalition presented the electorate with a canonically technocratic agenda that helped an already exhausted middle class explain away power cuts, skyrocketing currency exchange rates, and other processes through economic and technical categories. This narrative allowed the writing off of those who resisted such categories, including the taxi industry now challenged by Uber's arrival. Several actors in the industry engaged in what I call indexical reflexivity: an active, strategic performative work, visible and intelligible to, and aimed at, those whose categories organized the distribution of the sensible that explained one's disagreement away. It was a labor, ultimately, aimed at removing several marks they were carrying by someone else's design: that of the Political, that of Peronism, and that of the Past.

This chapter examines how postpolitical reasoning and postpolitical government speak to similar intuitions of late capitalism. It revises the argument for calling this mode of knowing a form of reasoning and makes a case for focusing ethnographically on how the moral colonization of the political brings about an experience where it is increasingly harder to disagree as equals.