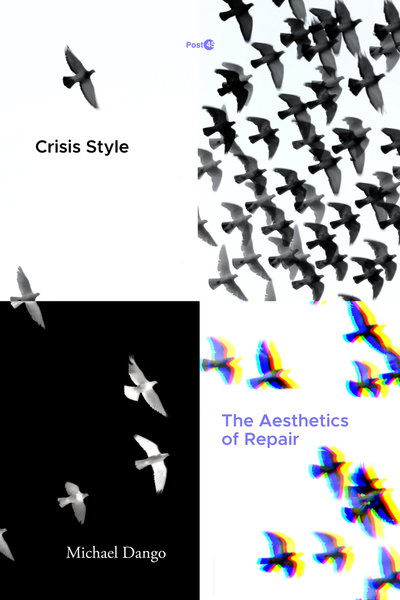 This introductory chapter argues we should name and theorize styles as actions. I introduce four prominent contemporary styles: detox, filter, binge, and ghost. Each provides a fantasy of repairing central crises in our world, whether a crisis of losing control over labor in a neoliberal world, as Marxists theorize, or a crisis of losing forms of recognition and subjectivity, as Foucault theorizes. I turn to Melanie Klein's concepts of "manic" and "obsessive" repair, both of which avoid repairing big and intimidating problems such as these by either turning attention to repairing something smaller or pretending there isn't a problem at all. In the styles I theorize, avoiding repair often takes the form of aspiring toward whiteness as a proxy for regaining control or recognition. Methodologically, I discuss how attention to style as an action of coordinating form and content intervenes into current debates in affect theory and formalism.

This chapter argues we should name and theorize minimalist art, music, literature, and architecture as a style of detox. This style gives people a sense of control when they live in environments not of their own making, whether because unfettered capitalism has left the world polluted or because digital environments are overstuffed with too much information. Detox conflates and expels social and environmental threats to white heterosexual intimacy. With an archive from 1965 to the present, I both track the racialized and sexualized history of toxicity in the United States, from concerns over pollution to concerns over data privacy, and tell the prehistory of the widespread craze of detoxing today, from Marie Kondo's tidying up movement to organic food diets. I also argue detox is what distinguishes minimalist writers like Raymond Carver, Mary Robison, and Tao Lin from earlier writers like Ernest Hemingway, whom I call a conservationist instead.

In a period of what Lauren Berlant calls "genre flail," filtering is a style of improvising new genres of recognition. Although most visible today as the primary style of social media, filter is also the style of novels of short stories, such as those by Jennifer Egan, Colum McCann, David Mitchell, and Elizabeth Strout, each of whom break up their narratives into discrete sections in which characters can show up in one role at a time; gentrification in urban cities; and forms of social action like Occupy Wall Street. Because of uneven access to platforms of filtering, however, the project often precludes Black and queer people from participating. I also argue that filtering distinguishes contemporary novels of short stories from those of the early twentieth century (e.g., William Faulkner); and Instagram and Snapchat from early twentieth-century technologies of toning and tinting photographs and film (e.g., sepia).

This chapter is about the long sentence in novels by Zadie Smith, Joyce Carol Oates, William Burroughs, Don DeLillo, and David Foster Wallace; the long take in contemporary "prestige" television shows including The West Wing and True Detective; and the long thread of fabric in garments designed by Issey Miyake at the turn of the millennium. In a world where some people feel they have lost control of their information and institutions have lost control of regulating everything from the economy to labor, bingeing helps people develop a sense of control as a kind of cosmopolitan who takes advantage of appropriating the information leaked by institutions and by other people. Because it deals with a loss of control through a loss of control, I call this style homeopathic, and I provide a taxonomy of homeopathy to better specify its attraction to theorists of postmodernism from Fredric Jameson to Jean Baudrillard.

Ghosting is a style of abandoning forms of recognition by disappearing from, rather than ending, channels of communication. It is one way of imagining repair of the public sphere under neoliberalism. I explore ghosting through the culinary style called "molecular gastronomy," which manipulates ingredients into forms that mask their contents; the multimedia projects of Barbara Browning, Mark Danielewski, and Chris Ware, each of whom haunt their novels by withdrawing their authorial presence; sculptures like Zach Blas's Fag Face, worn as a mask to enable users to evade detection by biometric surveillance; and the actions of the hacktivist collective Anonymous and its offshoots. Ghosting usually smuggles cultural particulars into a universal form, which I show is the opposite of Freud's form in Civilization and Its Discontents. The style is queer, in its evasion of identity categories and its cultivation of stranger intimacy, but it also tends to erase Blackness.

In the Afterword, I summarize the method of the book and its implications for cultural criticism today. I advocate for projects of naming and taxonomizing: creating and ordering categories. This helps us organize an aesthetic field in ways that counter the consumerist advertising categories of companies like Amazon. We should revive the task of making expert aesthetic judgments, but not in the moral terms of evaluating what is good and what is bad, high art or low art.