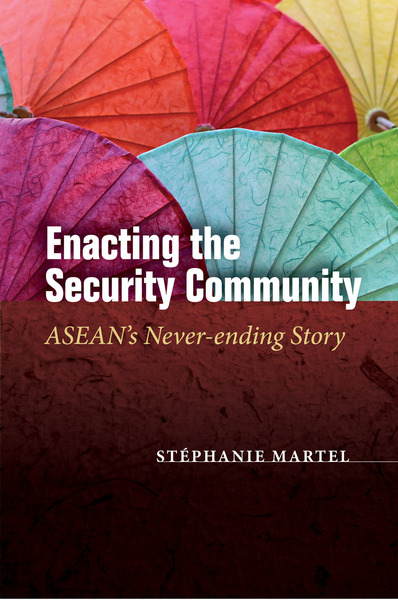 Chapter 1 Excerpt
Contents
Contents and Abstracts
1 A Cautionary Tale: Discourse in the Making of a Security Community
chapter abstract

This chapter situates the puzzle of ASEAN's resilience within the study of security communities and International Relations in Southeast Asia and beyond and discusses the value of a discourse-based approach. ASEAN has not only survived many accounts of its demise but has formally established its security community without having fulfilled its self-defined criteria for doing so. This paradox remains the focus of unresolved debate within Asia-Pacific IR, but it also provides an ideal opportunity to improve our understanding of how discourse brings security communities into being. This task requires more serious attention being paid to how security community–building, especially in the twenty-first century, is an inherently polysemic, omnidirectional, and contested enterprise.

This chapter develops a discourse-based and practitioner-near theoretical framework for the study of security communities. It draws from, combines, and extends various strands of cutting-edge IR scholarship—practice theory, ontological security literature, and critical security studies to emphasize how the discursive construction of danger(s) is what makes a security community come alive. This framework allows for a better understanding of the role of polysemy and contestation in security community–building in the twenty-first century. The chapter discusses key methodological choices that inform a discourse-based approach to International Relations.

3 Ghosts of the Past, Present, and Future: ASEAN's Approach to Regional Security
chapter abstract

This chapter undertakes a discursive history of the development of ASEAN's approach to regional security from the creation of the organization in 1967 to the formal establishment of ASEAN's security community in 2015. It reviews ASEAN's institutional evolution with a focus on major initiatives that shaped regional security governance, showing how ASEAN's self-identity as a security community in the making took shape incrementally through debate over key declarations and major initiatives, and how alternative paths of action were (often only temporarily) sidelined as a result of discursive power deployed by key actors. Despite being often presented as a teleology, a security community was actually framed retroactively as ASEAN's raison d'être, instilling a sense of coherence, purpose, and natural progress into the organization's self-narrative that smooths over difference but can never fully rid the institution of its ghosts.

4 The Bogeymen are Coming: From Transnational Crime to "Non-traditional Security"
chapter abstract

This chapter traces how transnational crime was gradually re-framed as an increasingly dangerous and elusive set of security threats, and came to form the core of ASEAN's "non-traditional security" (NTS) agenda. While NTS appears like a very consensual focus of regional security cooperation at first glance, there is not much agreement on what it consists of, or the best way to handle the ever-present but often intangible threats this concept refers to. The chapter also shows how the constructive ambiguity that informs ASEAN's focus on transnational crime and its expansion to others matters pertaining to "non-traditional security" allows the organization to claim added value in the pursuit of security in the region, including through aspirational—and highly unrealistic—initiatives (e.g., a Drug-Free ASEAN by 2025), despite a limited ability to produce concrete results.

5 Here There Be Dragons: Managing Interstate Conflict in the Asia-Pacific Region
chapter abstract

This chapter focuses on the renewed concern for matters of "traditional" security in ASEAN and the Asia-Pacific region. It discusses how major power rivalry, the emergence of an Indo-Pacific order, and maritime disputes tie into the debate on ASEAN's "centrality" in the regional security architecture. ASEAN's approach to interstate conflict management has been the target of ongoing criticism and frustration within the expert community and among ASEAN's "dialogue partners." The chapter looks at how ASEAN responded to various proposals for alternatives, extending to recent debates on the "Free and Open Indo-Pacific." The chapter also discusses the evolution of ASEAN's approach to the South China Sea.

This chapter deals with the "human dimension" of regional insecurity in Southeast Asia, focusing on ASEAN's claim to form a "people-centered" security community. It discusses the evolution of ASEAN's approach to issues like pandemics, natural disasters, intra-state conflict, and gendered forms of insecurity. It shows that ASEAN is increasingly pressured into developing solutions to ensure the security of its "people" while resisting the "sirens" of human security and the responsibility to protect. The chapter discusses the growing participation of NGOs in the ASEAN process on peace and security, and how it contributes to the development of alternative spaces of security governance where ASEAN's champion-of-the-people narrative is overtly challenged. Specific cases are covered, including trafficking in persons and the Rohingya crisis, to highlight how civil society actors, despite the constraints under which they operate, are still able to assert agency in shaping ASEAN's people-centered community.

7 To Hell and Back: ASEAN's Continuing Odyssey
chapter abstract

This concluding chapter takes stock of ASEAN's epic journey toward the realization of its security community. It contrasts different "versions" of the security community to highlight where they overlap, compete, and diverge, and the productive tension that results. It shows that each version conveys representations of danger and of what ought to be protected that are likely incompatible with the other versions. At the same time, participants in the making of ASEAN's approach to security all partake in the retelling of a common story that helps sustain the security community–building process. This chapter discusses future prospects as well as possibilities for transformative change in regional security governance. It concludes that the security community is very much what social agents involved in its construction say it is, and that while it is likely that ASEAN never reaches its final destination, it is, in fact, the journey that counts.