STANFORD
UNIVERSITY PRESS
The Ends of Paradise
Race, Extraction, and the Struggle for Black Life in Honduras
Christopher A. Loperena 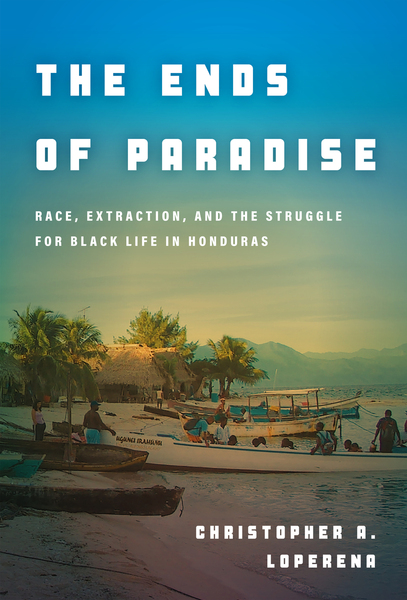 The Ends of Paradise
Race, Extraction, and the Struggle for Black Life in Honduras
Christopher A. Loperena

The introduction establishes how Black and Indigenous struggles for territorial autonomy in Honduras interact with larger social and economic forces, including the global resurgence of resource extraction that is slowly eroding the customary rights of Indigenous peoples across the Americas. Although the government of Honduras has presented tourism as a sustainable alternative to extractive industries, this chapter argues that tourism is an extractivist enterprise premised on environmental dispossession and racial violence against rural communities of color. It also shows how Garifuna—a Black Indigenous people of African, Arawak, and Carib descent—fight back against the extractivist mandate of the Honduran state and multinational capital on the Caribbean Coast.

Chapter 1 traces the historical genealogy of extractivism in Honduras. From the banana enclaves of the early twentieth century to sumptuous coastal tourism resorts and the contemporary bid to establish semiautonomous charter cities in purportedly unpopulated areas of the country, the state has tried to enact various visions of progress. All these visions, though, are intimately tethered to extractivism, particularly racial extractivism.

2 The Garifuna Coast: The Inclusionary Politics of Expulsion
chapter abstract

Chapter 2 analyzes how the tourism economy facilitates racialized extraction. The advent of multicultural rights unfolded alongside state programs designed to transform Garifuna people into subjects of development. But the inclusion of Black and Indigenous communities seems inseparable from the commodification of those communities; the government's policies all seem to render Garifuna lands and culture as tourism products. These policies are presented as a win-win for everyone, equally beneficial to Garifuna and working-class non-Indigenous Hondurans who remain stymied by poverty and the legacy of "underdevelopment." The only clear winner is not either one of these groups, but rather the mestizo elite. Garifuna resistance to government policies exposes the inner workings of supposedly inclusionary politics and how those efforts ultimately advance not inclusion, but racial and spatial expulsion.

Chapter 3 examines how statist development objectives seep into the lives of Garifuna in Triunfo de la Cruz, Honduras. Neoliberal economic paradigms emerged in tandem with morally saturated development discourses that tout poverty reduction, inclusion, and sustainability, and also imagine Garifuna as stakeholders with the capacity to benefit from and contribute productively to Honduras's tourism economy. Policies that promote participation in the tourism economy are entangled with contests over land and belonging. Conflicts over the fate of the community figure prominently in daily life, as community members—for and against government-sponsored development—reckon with the dispossession that inevitably comes with development and debate how to negotiate with and when to protest against these forces. Garifuna land defense strategies are articulated through the practice of Black autonomy: an ethico-political proposal that refuses dominant narratives of progress and instead asserts a notion of autonomy as collective action and social good.

Chapter 4 theorizes the spatial and temporal dimensions of Garifuna political subjectivity through an analysis of the movement to recuperate or "rescue" communal lands from privatization. The chapter examines how Garifuna women lead the lucha (struggle) in defense of their territory with their bodies, and how that defense is bound up with gendered narratives of ancestrality and the praxis of territorial mothering. To live ancestrally is a way of being in relation with the land, which is crucial to Garifuna autonomy and a key feature of the struggle to contest the destination-making strategies of multinational capital on the Caribbean coast.

Chapter 5 examines the public hearing at the Inter-American Court of Human Rights of the Garifuna Community Triunfo de la Cruz and Its Members v. Honduras. During court proceedings, Honduras's deputy attorney general argued that Garifuna should not be considered an "original people" (indigenous to Honduras) and thus Garifuna claims to national territory were not legitimate. State officials not only undermined the possibility of Black Indigeneity but also exalted the rights of officially recognized Indigenous peoples to defend mestizo property rights in the zone. This politics of (mis)recognition tethers Indigenous subjectivity to the mestizo nation-building project and ideologies of whitening. It reinforces the perception that Black people are foreigners in Honduras. The court's judgment in favor of the community established an important legal precedent for the recognition of Black territorial rights but also served to buttress state sovereignty over natural resources deemed to be of "public use."

The conclusion to this book begins with the violent murder of the Indigenous activist Berta Cáceres. At the time of her death, Cáceres was leading a daring community uprising against the development of a large hydroelectric project slated to be built on the Gualcarque River in the Lenca community of Río Blanco. Her death marked the beginning of a new wave of repression against Indigenous and Black activists that reached its apex on July 18, 2020, with the kidnapping of four community leaders in Triunfo de la Cruz. This worrisome pattern demonstrates deep-seated racial animus toward Black and Indigenous peoples and the rights they fought so hard to obtain during the preceding decades. In spite of the devastating and racist violence they face, Black and Indigenous peoples continue to mobilize in defense of life.