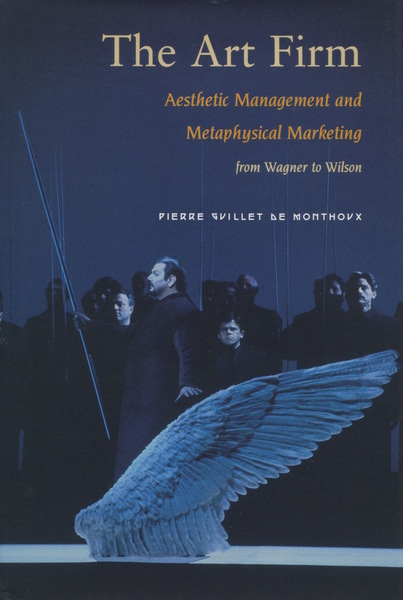 
Imagine an art firm with faith in European philosophy, a place where art is made to work, where aesthetics is the operative management theory for the enterprise. Imagine that Fred Nietzsche has just been appointed managing director of this operation. His résumé lists an MBA earned with a man named Schopenhauer and a stint as a public relations expert for the Bayreuth Festival. Although he had some problems with Richard Wagner, CEO for the festival, the global success of the project was indisputably part of the job description for this man Nietzsche.
Imagine further that Joseph Beuys has just been appointed to lead human resource management. You know…he’s the chap in the felt hat, the one who is lecturing in the company art space. Kant from Kaliningrad is the new and clever financial director. He’s the one who came up with the revolutionary concept of aesthetic value based on consensus-credit. Rounding out Kant’s department is his assistant Fred Schiller, who carries the label of management consultant/aesthetic coach.
Head of marketing is John Dewey, an American…although he’s actually more European than American. He is a stable fellow with the ability to talk to any sort of customer. Having him do what he does so well is critical to the success of Dionysus Inc. because you have to make sure that customers don’t take aesthetics the wrong way, thinking it’s some sort of frightening or intimidating totalitarianism. Dewey’s a democrat and can’t stand the thought of people making that sort of connection. A strong suit of his is that he is well educated in philosophy and avoids connecting the operation to some banal entertainment.
While other firms manufacture materials, Dionysus Inc. turns sign and images into movies and music, or the other way round. Dewey likes to point out that art firms like this one are a kind of philosophy firm. He picked up this idea from Schopenhauer, who early recognized the market potential for metaphysics…given that ivory-tower eggheads no longer cater to good philosophy in their dusty, dull old universities. Nietzsche prefers to say that Dionysus Inc. provides art, although he and Dewey do not waste a lot of time quibbling over their seemingly disparate views. In a final analysis, their arguments are pretty much the same. Anyway, the point is not products and services but rather performances, for Dionysus Inc. is a high-performance art firm. Schiller likes to call the operating strategy “Schwung” and claims this is how the company makes art work. The Germans use the word to describe the swing between poles, and the Romantic philosophers believed that Schwung is born of aesthetic energy.

How I wish I could have seen Dionysus Inc. in action. But the plant tour I have just described is nothing more than a vision. It was no doubt the presence of art and aesthetics in contemporary management discourses that inspired my daydream, and therefore I concluded that the time had come to pull together studies from a quarter of a century, ideas from friends, students, and colleagues, and readings done during my academic career as a teacher in management. Questions of how aesthetics makes value and how performance in business links to performance art had become central to economy in general and the future management of creative firms in particular. My vision was about Schwung in an art firm, a new type of firm rooted in aesthetic philosophy and its special kind of metaphysics.
Schwung generates aesthetic energy in creative processes. Romantic philosophers ultimately developed a whole philosophy of aesthetics to explain what moves people and what in fact makes life swing. Very real and practical experiences, the concluded, become the seedbed for cultivating Schwung in an individual’s life. If the capacity for generating this energy is possible, I wondered if it could also be managed. And if it could be, how? Further, as if in support of the conclusion of the Romantics, I recalled three of my own life experiences that had fired my curiosity and fascinating with Schwung management. I describe those experiences in detail in the first chapter before proceeding in the second, third, and fourth chapters with a crash course in the old philosophy finding new application as aesthetic theory for management. The following five chapters detail historical management cases from France, Germany, Russia, and Sweden to illustrate what it means to make art work through application of aesthetics and metaphysical marketing to practice. Finally, we travel to Italy for some good risotto and nice wine, and above all for an enlarged vision of art firms performing aesthetic value in tomorrow’s new economy, where Dionysus Inc. might turn to metaphysical mainstream reality. For those interested, a bibliography of further reading can be found at the publisher’s Web site: www.sup.org.