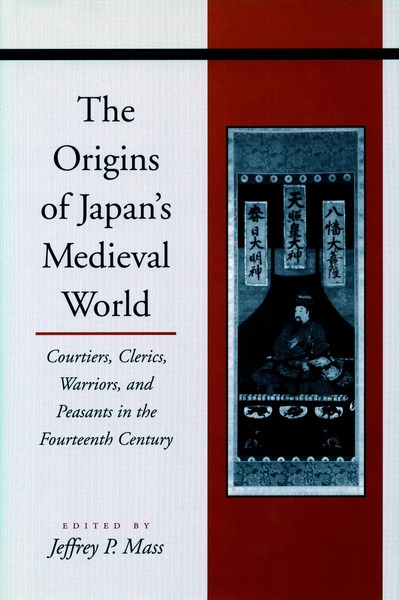 The Origins of Japan’s Medieval World
Courtiers, Clerics, Warriors, and Peasants in the Fourteenth Century
Edited by Jeffrey P. Mass

This pioneering collection of fifteen essays proposes to change the way we think about fourteenth-century Japan and what preceded and followed it. Most notable is the search for Japan’s medieval beginnings, which are found not in the developments flowing from the establishment of the first shogunate in the 1180’s, but rather in the shogunate’s collapse 150 years later.

In this admittedly controversial interpretation, the Kamakura age becomes the final episode in Japan’s late classical period, with the courtier and warrior regimes of that era together seeking to maintain the traditional order. But under the leadership of Japan’s first truly “medieval men” (the emperor Go-Daigo and Ashikaga Takauji), the old order was dramatically transformed. In the editor’s words, “the rules changed, new behavior was everywhere, the past was only one of several competing influences. After the better part of a millennium, the spell cast by courtiers was finally broken.”

Among the topics treated are the strange new partnerships within the social hierarchy, the impact of sustained warfare on societal values, the new subservience of women in the post-Kamakura environment, the unprecedented emergence of warriors as the moralists and spokesmen of a new age, and the appearance of a new, more sharply partisan religious sectarianism.

In addition, we are shown the fragility of a history now dependent on battlefield success, the assumption of control of imperial poetic anthologies by warriors, the condition of the old and new Buddhist establishments, the paradox of warrior flamboyance and warrior stolidity, and the imposition of enduring village names.

"A good selection of the latest scholarship by European, North American, and Japanese researchers. . . . An appealing aspect of the work is its multidisciplinary scope: essays on political history dominate, but the inclusion of several on religion, women, peasants, and literature add considerably to our understanding of the fouteenth century."

"The work is a valuable tool for the speacialist, for it provides information about a period woefully under-represented by English works. . . . Origins is to be commended for presenting a reevaluation of the relationship between the Kamakura and Muromachi periods, a process that in-and-of itself aids in understanding the complexity that was fourteenth centufy Japan."

"Any specialist in Japanese history or culture should read this book. . . . All of the essays deserve serious attention."

"Together, the essays provide a rich and varied perspective on the fourteenth century."