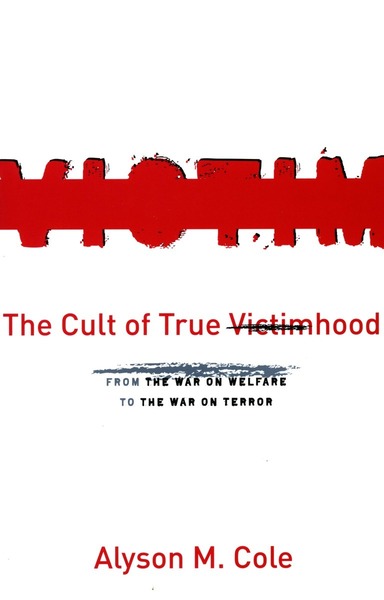 The Cult of True Victimhood
From the War on Welfare to the War on Terror
Alyson M. Cole

Condemnations of "victim politics" are a familiar feature of American public life. Politicians and journalists across the ideological spectrum eagerly denounce "victimism." Accusations of "playing the victim" have become a convenient way to ridicule or condemn. President George W. Bush even blamed an Islamic "culture of victimization" for 9/11. The Cult of True Victimhood shows how the panic about domestic and foreign victims has transformed American politics, warping the language we use to talk about suffering and collective responsibility.

With forceful and lively prose, Alyson Cole investigates the ideological underpinnings, cultural manifestations, and political consequences of anti-victimism in an array of contexts, including race relations, the feminist movement, conservative punditry, and the U.S. legal system. Being a victim, she contends, is no longer a matter of injuries or injustices endured, but a stigmatizing judgment of individual character. Those who claim victim status are cast as shamefully passive or cynically manipulative. Even the brutalized Central Park jogger came forth to insist that she is not a victim, but a survivor.

Offering a fresh perspective on major themes in American politics, Cole demonstrates how this new use of "victim" to derogate underlies seemingly disparate social and political debates from the welfare state, criminal justice, and abortion to the war on terror.

"Alyson Cole provides a clear-sighted critique of a certain cherished myths of the American Right."

"The Cult of True Victimhood weaves together current themes from religious studies, rhetoric, and cultural studies that provide a useful explanation of the linguistic stances that inform American discussions of victimhood."

"Cole presents an acute analysis . . . proves that the rise of antivictim discourse has fueled antiliberal politics . . . Cole chooses breadth and variety over in-depth analysis of any one aspect of the language of victimhood. In doing so, she convinces the reader of the pervasiveness of antivictimist discourse and its power to shape American politics. In addition, Cole's book is filled with original and often unexpected interpretations. And she achieves a rare feat for a book that draws so heavily on philosophy, political theory, and discourse analysis: she writes a page-turner, a book in which wit and irony accompany acute analysis."

"In The Cult of True Victimhood, political theorist Alyson M. Cole explores what she depicts as a coherent ideological and political campaign against victims, which is related to the contemporary backlash against affirmative action, multiculturalism, and the welfare state . . . The Cult of True Victimhood is a well written and stimulating book that social scientists interested in issues ranging from criminology to feminism and ethnic relations could find interesting. Moreover, this solid piece of scholarship offers an original take on contemporary U.S. society that has no equivalent in the existing social science literature."

"Alyson M. Cole provides a remarkably original analysis of a profound transformation in the cultural values informing public discourse in the United States. By tracing the underlying logic of the 'anti-victim campaign' over several decades, she illuminates dimensions of privatization that operate well beyond explicit neoliberal arguments to roll back the state. Most importantly, Cole deftly demonstrates how this new version of individualism effectively curtails the possibility for social justice."

"In the 1960s, 'victim' signified political awakening and a call to arms, a mandate to confront structures of inequalities that divided people along lines of race, gender, class, sexuality, and disability. After several decades of rightwing attack and liberal backsliding, 'victim' has been turned into an epithet and a badge of shame. With vibrant and incisive prose, Alyson M. Cole traces and dissects the discourses that have relentlessly stripped away the ideological underpinnings of feminism, anti-racism, and the emancipatory politics spawned by the movements of the 1960s. The Cult of True Victimhood is a wake-up call that the Left is losing the ideological war that it began."

—Stephen Steinberg, author of The Ethnic Myth: Race, Ethnicity, and Class in America and Turning Back: The Retreat from Racial Justice in American Thought and Policy

"An engaging and provocative book, historically grounded, theoretically engaged, and pertinent to an understanding of today's American political culture. Cole argues persuasively that we live in an era of 'anti-victim' politics, in which the campaign against victims has had a profound impact in re-orienting our political and social life, making it harder than ever to address injustice and inequality. This book will surely command widespread interest and generate the best kind of debate."

—Austin Sarat, Amherst College, Editor of Law, Culture and the Humanities, Editor of Studies in Law, Politics, and Society

"Alyson M. Cole has written a brilliant book that crosses political theory and American studies. By exploring the roots and impact of the 'anti-victim' discourse so prevalent in our culture now, she raises significant questions about the way we name and address subordinationand injustice. In chapters addressing feminism, post-civil rights racial politics, and legal practice, she navigates a breathtaking range of references by moving playfully and insightfully from high theory to popular culture."

"Cole, on the other hand, offers a less dogmatic and more theoretically sophisticated reflection, less focused on the structural injustices of inequality and more on the dynamics of 'post-event' management of concepts, thoughts and the framing of the protagonists. The suggestion of a stigma becoming attached to 'victim,' mobilized as a social reconstruction of the concept, is a powerful one, well built and finely written." – Peter Rogers, Sociology of Law, Macquarie University 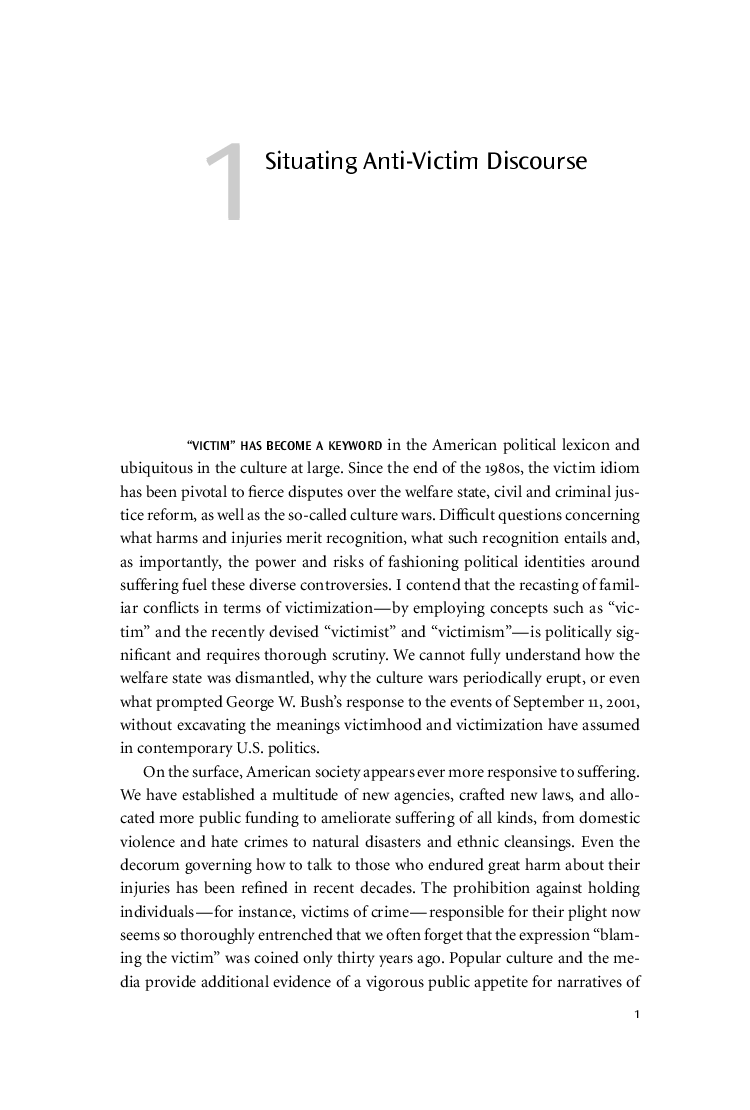 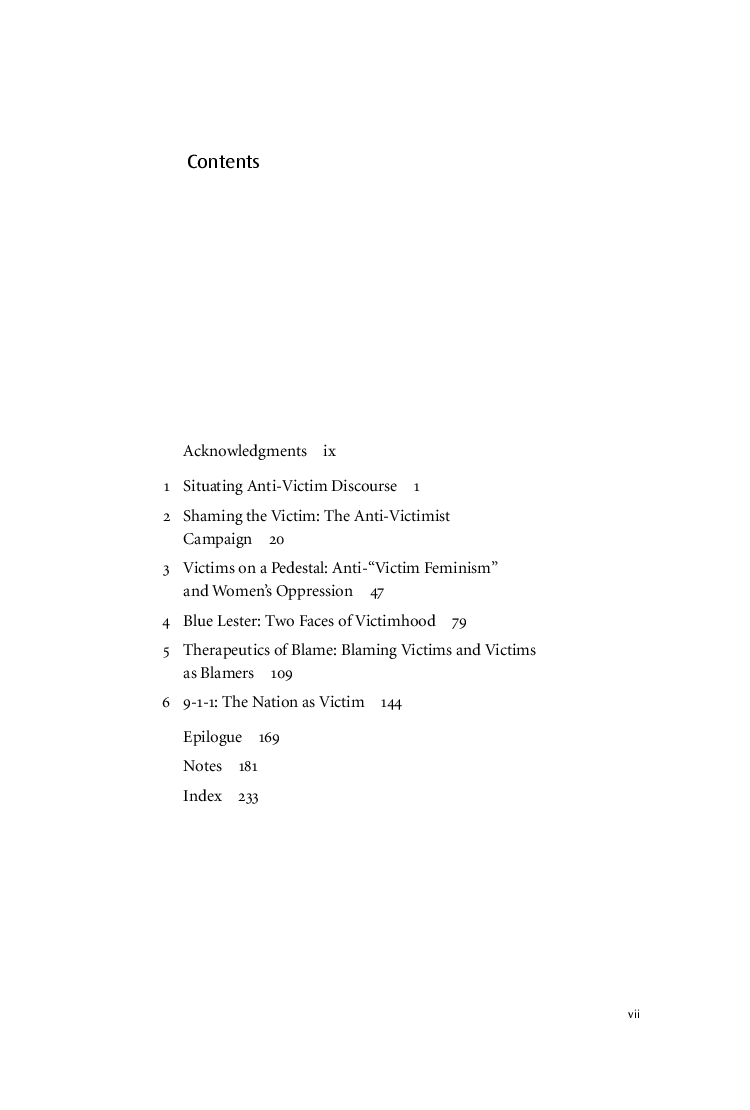 The big microagression lie: The real story behind the right's phony war on political correctness

WNYC Radio
Why Sexism Is So Central to This Presidential Race