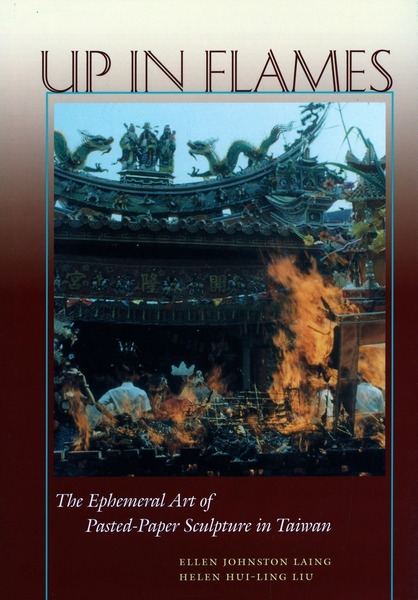 Up in Flames is the first comprehensive study of the traditional Chinese craft of paper sculpture: the construction in bamboo and paper of human figures, figures of gods, buildings, and other objects—all intended to be ritually burned. The book documents this ancient craft as it exists today in Taiwan. The fascinating fundamentals of the craft, the tools and materials, as well as the techniques used to construct houses and human figures, never investigated before, are described and illustrated in detail. The written material is augmented by many color photographs showing the objects and the men and women who make them.

Although the tradition of burning objects as a part of religious ceremonies is still strong, the traditional paper and bamboo objects are being more and more often replaced by plastic components and whole preprinted cardboard counterparts. The resulting changes in the personal, business, and especially the creative and artistic side of the craft are therefore also addressed.

Ellen Johnston Laing is Research Associate at the Center for Chinese Studies at the University of Michigan. Helen Hui-ling Liu is a commercial artist from Taiwan.