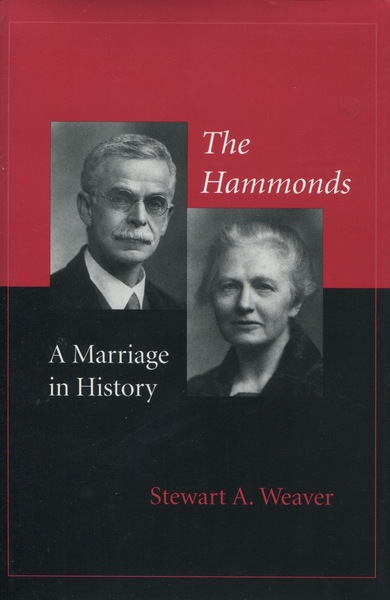 The Hammonds
A Marriage in History
Stewart A. Weaver

Here for the first time is the story of one of history's great scholarly and marital collaborations. J. L. and Barbara Hammond were among the most innovative and influential historians of the twentieth century. Between 1911 and 1934, they wrote eight books together that amount, in effect, to the first sustained social history of modern England. Three of their books in particular—The Village Labourer (1911), The Town Labourer (1917), and The Skilled Labourer (1919)—not only anticipated what came to be known as "history from below," but also permanently changed the way most people think about the Industrial Revolution, which they defined in the apocalyptic terms to which we have become accustomed.

The Hammonds were also public figures prominently involved, along with L. T. Hobhouse, J. A. Hobson, C. P. Scott, and others, in the definition and dissemination of "the new liberalism." From the point of involvement in the politics of one century, they helped give enduring historical shape to another, and thus exercise, like their friends Sidney and Beatrice Webb, a dual fascination.

Of the two Hammonds, J. L. was the more prolific, writing six books on his own and serving as a political journalist for virtually his entire professional life, which saw him intervene editorially in every public crisis from the Boer War to the Second World War. Ireland was (after the Industrial Revolution) arguably his greatest passion, one to which he devoted much of his editorial life and his supreme literary effort, Gladstone and the Irish Nation (1938).

Barbara Hammond was an accomplished classicist, the first woman to earn a First Class degree in Greats at Oxford. She is shown here to have done much more work on the labourer books than has been previously recognized, and to sustain through her letters an artful running commentary on the foibles of her age. Through her, especially, the author evokes a radical but also doggedly Victorian sensibility that survived uneasily into the age of Bloomsbury and beyond.

The Hammonds were unique in the extent of their fused identity, in the extent to which they became, as G. M. Trevelyan once put it, "one flesh and one author." The Hammonds is part dual-biography, part evocation of an age, but it is also a study of marriage, a marriage at a particular moment in history, a marriage in the art and craft of history.

Stewart A. Weaver is Associate Professor of History at the University of Rochester. He is the author of John Fielden and the Politics of Popular Radicalism, 1832-1847.

“This beautiful book, written with great elegance, tells the fascinating and up to now largely neglected story of two of the most important British historians of this century.”—Peter Stansky, Stanford University