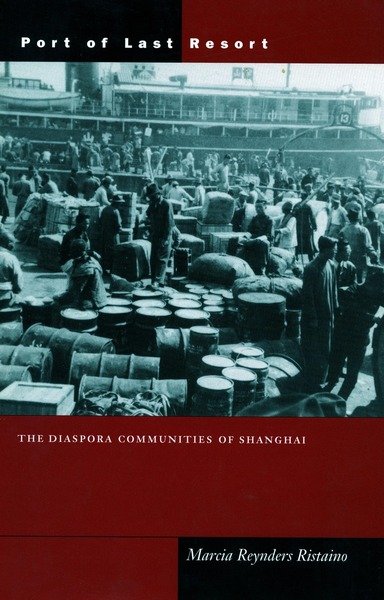 This book examines two large and generally overlooked diaspora communities, one Jewish and the other Slavic, which found refuge in Shanghai during the period 1900-1950. Victims of discrimination and persecution in their own lands—Central and Eastern Europe, Russia, and Ukraine—they chose Shanghai as their destination because no documentation was required to enter the city and settle there. In their struggle to survive and build a life in this Chinese open port, they encountered severe political, social, economic, and cultural challenges.

The Jewish diaspora community began forming in the early 1900s and increased to more than 18,000 after the initial triumphs of Nazism. The Slavic community eventually numbered about 30,000 people, escaping revolution and persecution from Bolshevik and fascist forces at home and in north China. This book focuses on how these diverse groups, adhering to various religious and cultural traditions, formed communities, preserved their national and cultural identities, chose their leaders, found gainful employment, coped with the alien Chinese culture, educated and raised their children, and established a considerable presence in this large, cosmopolitan city.

The author examines at length the different experiences and responses of the two diaspora groups during World War II under the Japanese occupation of Shanghai. With the Chinese Communist takeover of the city in 1949, both groups found themselves in a renewed struggle to find a home, adding still another chapter to the saga of their diaspora experiences. The book concludes with an account of how the two groups handled this new challenge and where they finally found refuge. Apart from the particulars of the Shanghai experience, the story of the two communities clearly resonates with today’s accounts of societies in conflict, dislocated populations, and varied struggles to survive and sustain life under trying conditions.

Marcia Reynders Ristaino is Senior Chinese Acquisitions Specialist at the Library of Congress. She is the author of China's Art of Revolution: The Mobilization of Discontent, 1927 and 1928.

"For her meticulous and fascinating study of the Slavs—Russians, Ukrainians, Poles—and Jews, who lived in Shanghai from the early 1920s until well after the Communist victory in 1949, Marcia Ristaino has made use of Chinese, Japanese, German, Russian, and English sources to describe the survival of a refugee community that at one time numbered over 50,000 people. . . . Ms. Ristaino has written a remarkable book. She describes well the lives of heroes, villains, spies, collaborators, prostitutes, and many other people simply doing their best to survive."

"This is an academic book and possesses scholarly strengths . . . a thoroughly researched, impressive and sometimes fascinating piece of work, interwoven with themes that resonate to this day."

"In detail and with insight, Ristaino presents the arduous struggle that [two diaspora populations]—diverse in political belief, ethnicity, religion, and cultural tradition—fought to form communities, preserve their national identities, sustain their cultural individualities, survive poverty, educate and rear their young, and deal with the alien Chinese culture in Shanghai."

"Ristaino provides a fresh and valuable addition to the growing scholarship of diaspora histories."

"Ristaino has done an admirable job in research . . . .The work is a must-read for emigration historians, twentieth-century Chinese historians, and urban historians and would be appropriate for undergraduate students. It would definitely be appreciated by those who found refuge in Shanghai during the interwar years. By examining the neglected history of those two diasporas, Port of Last Resort adds to the urban history of Shanghai."

"This masterful work makes a significant contribution to three disparate fields of study: diaspora studies, history of refugees in the twentieth century, and Jewish studies. No other scholar has brought so many different parts of wartime Shanghai within the purview of one work."

"It is an impressive study about complicated issues that deserves a wide audience, which adds both to our knowledge of how diaspora communities function and adapt, and to the growing body of academic work on Shanghai."