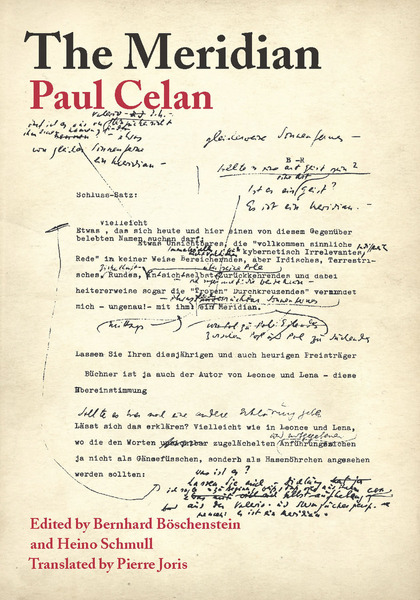 Winner of the 2013 Aldo and Jeanne Scaglione Prize for a Translation of a Scholarly Study of Literature, sponsored by the Modern Language Association.

Originally presented as a speech to the German Academy for Language and Poetry on the occasion of Celan's acceptance of the Georg Büchner Prize for literature, The Meridian is one of, if not the most important poetological statement of the second half of the twentieth century. Much more than a personal statement or occasional piece, it is a meditation on the state of poetry and art in general and a rigorous attempt to account for what poetry is, can, and must be after the Holocaust. This definitive historico-critical edition, available for the first time in English, presents not only the first drafts, but also a vast array of notes and preparatory work and a brief essay on Osip Mandelstam, all of which work to expand the field of reference of Celan's manifesto and reveal its true scope. Rich commentaries clarify Celan's notes to authors as diverse as Leibniz, Scheler, Kafka, Hofmannsthal, Husserl, Pascal, Valéry, Heidegger, and others.

Listen to an interview about Celan's Meridian with translator Pierre Joris on the radio program Cross Cultural Poetics, hosted by poet and professor Leonard Schwartz. The shows airs on KAOS 89.3FM Olympia, Washington and is archived online by The University of Pennsylvania's Pennsound.

Paul Celan (1920–1970) remains the most important German-language poet of his time, His oeuvre—11 volumes of poetry and a wide range of translations from eight languages of poets such as Shakespeare, Mandelstam, Valéry, Rimbaud—has received massive critical attention from major thinkers such as Hans-Georg Gadamer, Peter Szondi, Maurice Blanchot, Emmanuel Levinas, Jacques Derrida, and Philippe Lacoue-Labarthe.

"This translation of a critical edition represents, as Joris himself notes, an epic work. In minute detail it traces the origins and evolution of Celan's Meridian speech for an Anglophone readership, thus making Celan's text as close as possible to an 'original' work in a language other than the one in which it was conceived and published. The volume represents an important step in 'naturalizing' Celan into the English language and (almost) opening his creative process and universe to non-native speakers of German."

"Over the last half century Paul Celan has emerged as the iconic poet of the postwar/post-Holocaust period—for some of us the greatest German-language poet of the twentieth century as a whole. To those for whom he has served as a guide or beacon, his Meridian speech from 1960 remains his most telling testament to the powers and problematics of poetry and art. Now, in this remarkable work of scholarship, a still greater body of poetics and poesis comes to light. Inaugurated by Bernhard Böschenstein and Heino Schmull, and carried over into English by poet and translator Pierre Joris, Celan's celebration of the uncanny and transitory appears along with its several early versions and with a range of source materials that make up a poetic collage, an implicit epic, in their own right. Those who know how to read it will find sustenance here for years to come."

"The Meridian speech is one of Paul Celan's key works. This meticulous, fascinating, and, finally, compelling edition begins by unlocking what seems to be the work's multifoliate nature. Ultimately, though, and with the help of Pierre Joris's eloquent translation, we discover that that under the many surfaces of this magisterial essay is an abyss of poetic thinking struggling to emerge into the light of our encounter."

"It may seem quixotic to undertake a translation of all the notes and drafts leading up to The Meridian. However, with a poet of Celan's importance—a poet not given to writing statements at all and whose collected prose amounts to some 50 pages—just tracing the genesis of this major poetics statement would be worthwhile. But what we have here is more: it is a record of Celan's thinking. In other words, a treasure." 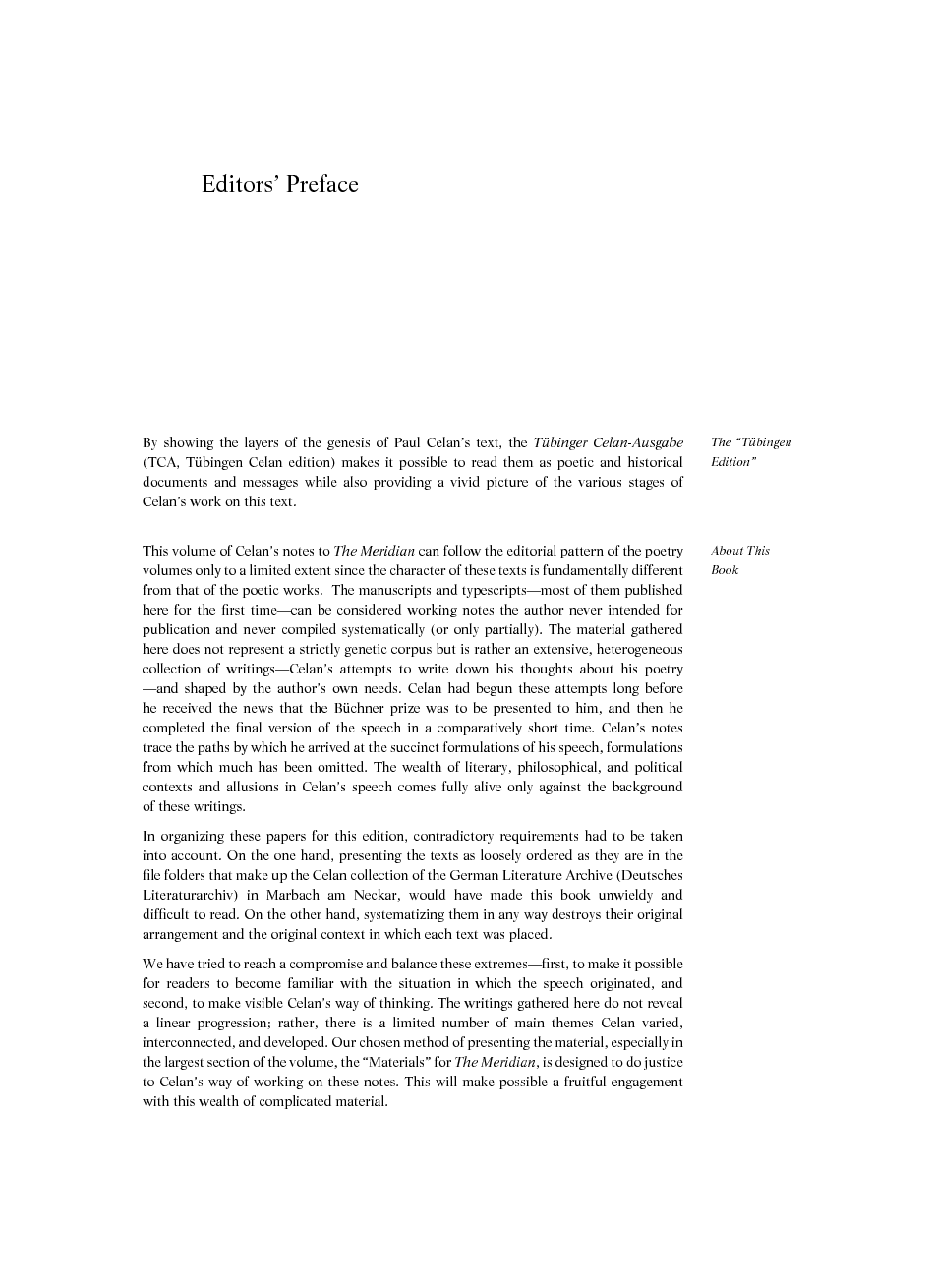 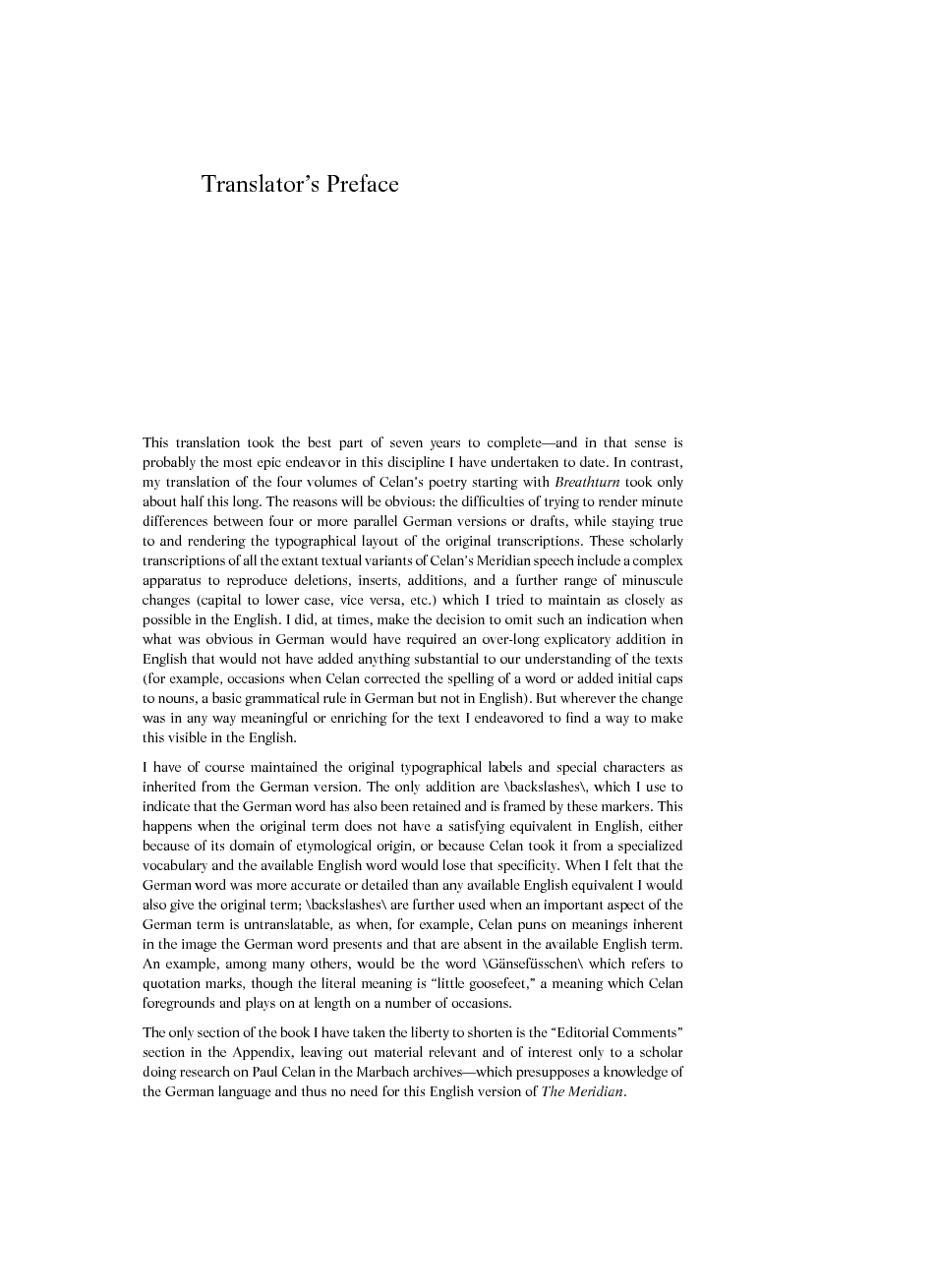 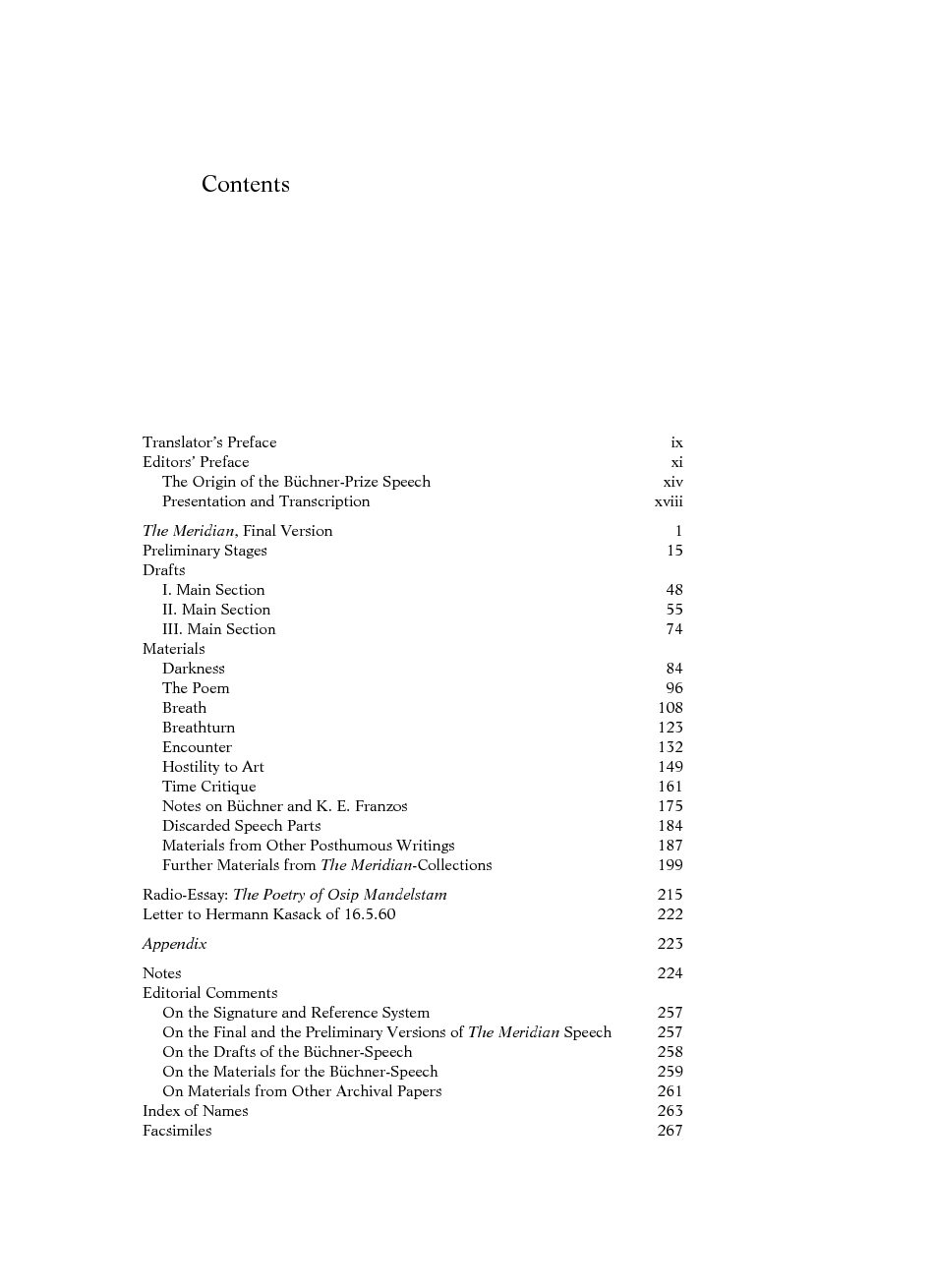