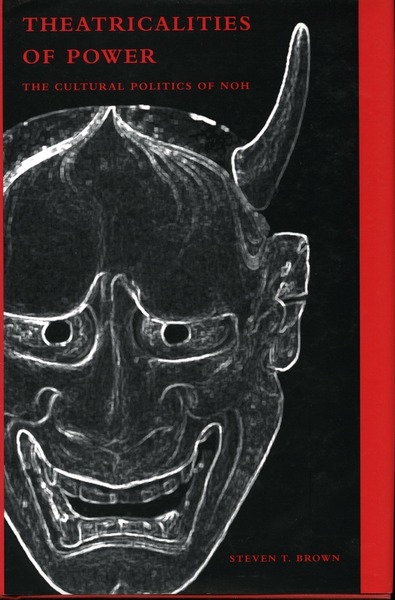 Through an extended reading of the noh play Aoi ne Ue, as well as briefer examinations of several other plays, Theatricalities of Power sheds new light on the circulation of power and desire in the middle and late medieval periods in Japan. The author argues that, rather than simply mirroring the sociopolitical contexts in which they were performed, these plays constituted an active, productive force in the theater of the medieval cultural imaginary by engaging specific sociopolitical issues and problems.

Neither reducing noh to its theatrical conventions nor abstracting its style and poetics from its performativity, the book reads noh differently, opening the performance text to its historically specific contexts. It aims not merely to recount the history of noh, but to investigate the history in noh, to explore "the indecision as to the limit" between the performance text of noh and its other.

The author approaches noh as a site of conflict framed by the mechanisms of patronage within which poetic, religious, political, and economic discourses are brought together in complex and innovative ways. He brings to the fore the "micropolitics of culture" operative in noh by ferreting out the power relations and tensions at play between noh texts and their institutions of support and by opening noh to extradramatic linkages with contemporaneous figurations of authority, change in legal codes, and sexual politics.

Steven T. Brown is Associate Professor of Japanese Medieval Literature, Popular Culture, and Critical Theory at the University of Oregon.