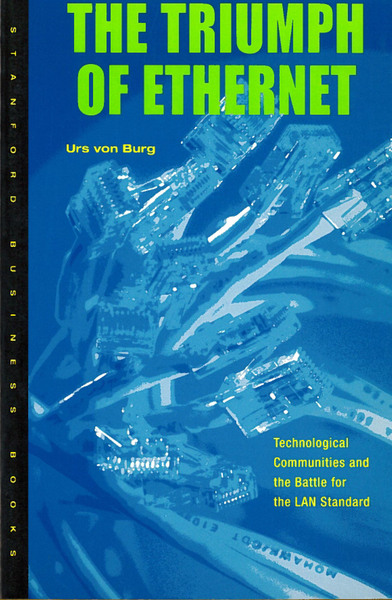 The Triumph of Ethernet
Technological Communities and the Battle for the LAN Standard
Urs von Burg
SERIES: Innovation and Technology in the World Economy

One of the most important elements in the computer revolution has been agreement on technological standards. The advances in communication allowed by millions of computers connecting over various networks are based on these networks sharing a common language. This book tells the complete story of the battle between several competing technologies in the late 1970s and early 1980s to become the compatibility standard in one high-tech arena, the LAN (local area network) industry.

In the end, a single technology succeeded in dominating the entire industry: Ethernet. The author argues that Ethernet triumphed not because it was better or cheaper, but because of a clever strategy by Ethernet’s corporate sponsors. This strategy mandated the building of a large supplier base around the technology in order to compensate for an inability to produce all required components and devices. Within a few years, Ethernet had greatly surpassed its competitors in gaining suppliers, which included specialized start-ups, semiconductor firms, and established computer manufacturers. This supplier advantage proved an invaluable strategic asset. As suppliers developed various price and product advantages that were easily adopted by Ethernet, its competitors were driven out of the market.

Key to understanding the importance of a supplier base in the race for standards is the crucial role of a technological community. The book demonstrates how technological communities account not only for critical differences in the standardization strategies of various LAN vendors, but also for the emergence of other important instances of technological competition. For example, the recent rise of Linux and Java can be seen as the result of successful community-driven strategies.

The story of the battle for the LAN standard is also a story of the Internet more broadly, and so the book offers unique insights into its dazzling growth, as LANs became important corporate on-ramps to the Internet and several LAN suppliers (such as 3Com) evolved into leading suppliers of Internet technology.

"An important and defining look at the early days of local area networking. Von

Burg has captured the interplay of science, people, money, and luck that defines

"Few people are aware of the intense battles that resulted in today's networking standards. Urs von Burg's engaging history of this tumultuous period, with its analysis of the technological ecosystems and marketing economics involved, contains valuable lessons for anyone interested in capturing a dominant market share for an innovation."

"Superb. . . . A solid and thoroughly researched study of a major segment of the global high-technology economy. Von Burg's theory of 'technological communities' is an important contribution."

"A vivid picture of a turbulent time. Von Burg objectively describes the technical, financial, and personal battles involved, and he puts the issues into a larger context that will be useful for making sense of today's technological developments."

"This was a fascinating read."

"It was refreshing to see that—at last—one author in the standards domain acknowledges the importance of individual contributors and refrains from seeing the world purely through an economist's eyes."

"I would highly recommend this book to anyone who is interested in standards research and/or history of computing and networking."

"Urs von Burg's well-written book . . . .is timely and useful, and not just to business historians."