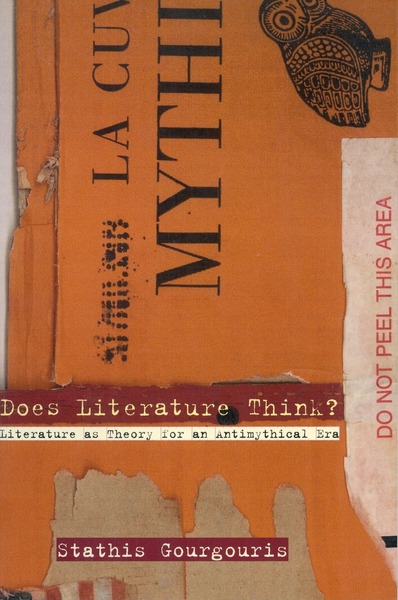 Does Literature Think?
Literature as Theory for an Antimythical Era
Stathis Gourgouris

What is the process by which literature might provide us with access to knowledge, and what sort of knowledge might this be? The question is not simply whether literature thinks, but whether literature thinks theoretically—whether it has a capacity, without the external aid of analytical methods that have determined Western philosophy and science since the Enlightenment, to theorize the conditions of the world from which it emerges and to which it addresses itself.

Suspicion about literature's access to knowledge is ancient, at least as old as Plato's notorious expulsion of the poets from the city in the Republic. With full awareness of this classical background and in dialogue with a broad range of twentieth-century thinkers, Gourgouris examines a range of literary texts, from Sophocles' Antigone to Don DeLillo's The Names, as he traces out his argument that literature possesses an intrinsic theoretical capacity to make sense of the nonpropositional.

Stathis Gourgouris teaches Comparative Literature at Columbia University. He is the author of Dream Nation: Enlightenment, Colonization, and the Institution of Modern Greece (Stanford, 1996).

“...a rewarding and exciting book.”—Colloquy