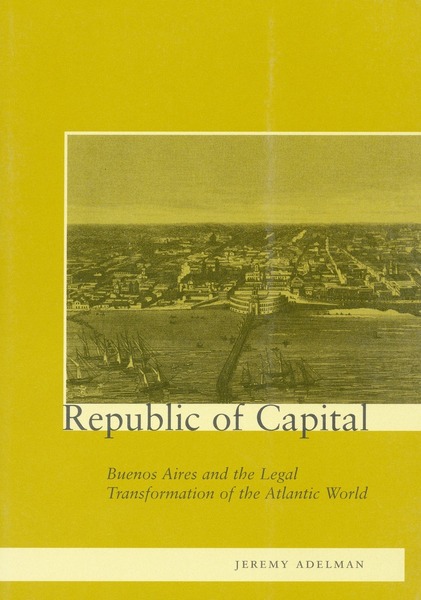 Winner of the 1999 American Historical Association Prize in Atlantic History.

This book is a political history of economic life. Through a description of the convulsions of long-term change from colony to republic in Buenos Aires, Republic of Capital explores Atlantic world transformations in the eighteenth and nineteenth centuries.

Tracing the transition from colonial Natural Law to instrumental legal understandings of property, the book shows that the developments of constitutionalism and property law were more than coincidences: the polity shaped the rituals and practices arbitrating economic justice, while the crisis of property animated the support for a centralized and executive-dominated state. In dialectical fashion, politics shaped private law while the effort to formalize the domain of property directed the course of political struggles.

In studying the legal and political foundations of Argentine capitalism, the author shows how merchants and capitalists coped with massive political upheaval and how political writers and intellectuals sought to forge a model of liberal republicanism. Among the topics examined are the transformation of commercial law, the evolution of liberal political credos, and the saga of political and constitutional turmoil after the collapse of Spanish authority.

By the end of the nineteenth century, statemakers, capitalists, and liberal intellectuals settled on a model of political economy that aimed for open markets but closed the polity to widespread participation. The author concludes by exploring the long-term consequences of nineteenth-century statehood for the following century's efforts to promote sustained economic growth and democratize the political arena, and argues that many of Argentina's recent problems can be traced back to the framework and foundations of Argentine statehood in the nineteenth century.

Jeremy Adelman is Professor of History at Princeton Univers

"This is an ambitious work that approaches from a new and original vantage point an unusually vast historical landscape. It is a first-rate contribution that brings significant enrichment to the field, and should exert an important influence on its future development."

"This book by Jeremy Adelman takes us on a marvelous journey from late colonialism through decolonization."

"This ambitious work considers an often overlooked issue in the historiography of Latin America: how new and unstable states undertook to create and protect property rights. . . . This is an excellent work that will be of immense value not only to scholars of Argentine history, but to anyone who is interested in the history of ideas or the impact of laws and political institutions on economic change."

"The combination of Adelman's persuasive argumentation and analysis makes this work an exceptional contribution to our understanding of nation building."

"Republic of Capital is an engaging, well-researched, and important contribution to our understanding of the political, intellectual, and legal changes that occurred in the Buenos Aires region from the late eighteenth century through the mid-nineteenth century, with a brief afterword on twentieth-century developments."

"The impressive explanations of liberalism, commercial realism, and how a new commercial code was enacted provide new insights into Argentine economic and political history. Adelman has provided a model by which to study philosophical and material backgrounds to other such codes enacted in the nineteenth century."

"This is an excellent work that will be of immense value not only to scholars of Argentine history, but also to anyone who is interested in the history of ideas or the impact of laws and political institutions on economic change."