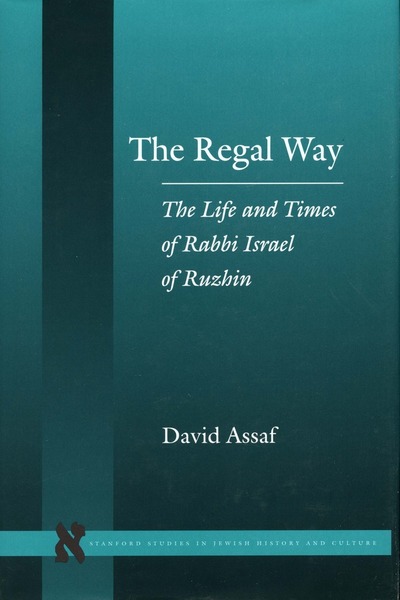 The Regal Way
The Life and Times of Rabbi Israel of Ruzhin
David Assaf
SERIES: Stanford Studies in Jewish History and Culture

This is a pioneering study of the nineteenth century Hasidic movement as shown through the life of one of the most controversial and influential Hasidic leaders, Rabbi Israel Friedman of Ruzhin (1796-1850). The dramatic episodes of his life—including his involvement in the murder of Jewish informers, his imprisonment in Russia, his subsequent escape to Austria where he successfully reestablished his court—are echoed by the contradictory and highly critical opinions of his personal character and his role as leader of one of the largest and most opulent Hasidic courts of the nineteenth century.

Nineteenth-century Hasidism has been a comparatively neglected topic in Jewish historiography largely because of the traditional view that the movement was in a degenerate state during this period. The natural interest that scholars found in the eighteenth-century origins of the movement, alongside their personal dislike of the nineteenth-century Hasidic courts and their machinations, led them to concentrate on the earliest years and the more recent phases of Hasidism.

The book is in four parts. Part I draws on surprisingly rich non-Hasidic sources as well as on Hasidic materials to recreate the early life of Rabbi Israel from his childhood to his leadership of a Hasidic community. Part II concentrates on his activities as a famous spiritual leader, his adventures in Russia, and his final years in Austria. In Part III, the author analyzes major aspects of Rabbi Israel’s career and thought as a Hasidic leader and public figure, with emphasis on his approach to materialism, wealth, and luxury. Part IV describes in detail the royal Hasidic court of Rabbi Israel and his sons—its formation, buildings, economics, social structure, functionaries, and administrative organization.

David Assaf is Professor of Jewish History at Tel Aviv University. He is the editor of the English translation (from Yiddish) of Journey to a Nineteenth-Century Shtetl: The Memoirs of Yechezkel Kotik and the compiler of Bratslav: An Annotated Bibliography.

"Assaf is a scholar who knows how to manage vast bits of detail but also how to fit them together in a coherent and plausible whole. . . . [He] has used the only possible method for sifting among sources, that of common sense. He has done so with great success and produced a first-rate biography."–AJS Review

"This is a path-breaking and thorough study of an important and neglected chapter of modern Jewish history."American Historical Review

"It is a very important addition to the history of Hasidism and the study of East European Jewish history."