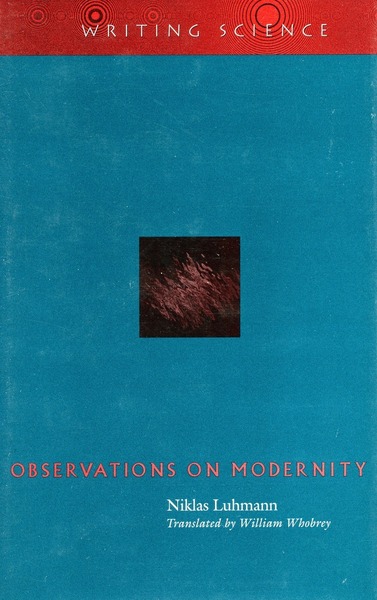 This collection of five essays by Germany’s most prominent and influential social thinker both links Luhmann’s social theory to the question “What is modern about modernity?” and shows the origins and context of his theory.

In the introductory essay, “Modernity in Contemporary Society,” Luhmann develops the thesis that the modern epistemological situation can be seen as the consequence of a radical change in social macrostructures that he calls “social differentiation,” thereby designating the juxtaposition of and interaction between a growing number of social subsystems without any hierarchical structure. “European Rationality” defines rationality as the capacity to see the difference between systems and their environment as a unity. Luhmann argues that, in a world characterized by contingency, rationality tends to become coextensive with imagination, a view that challenges their classical binary opposition and opens up the possibility of seeing modern rationality as a paradox.

In the third essay, “Contingency as Modern Society’s Defining Attribute,” Luhmann develops a further and probably even more important paradox: that the generalization of contingency or cognitive uncertainty is precisely what provides stability within modern societies. In the process, he argues that medieval and early modern theology can be seen as a “preadaptive advance” through which Western thinking prepared itself for the modern epistemological situation. In “Describing the Future,” Luhmann claims that neither the traditional hope of learning from history nor the complementary hope of cognitively anticipating the future can be maintained, and that the classical concept of the future should be replaced by the notion of risk, defined as juxtaposing the expectation of realizing certain projects and the awareness that such projects might fail. The book concludes with “The Ecology of Ignorance,” in which Luhmann outlines prospective research areas “for sponsors who have yet to be identified.”