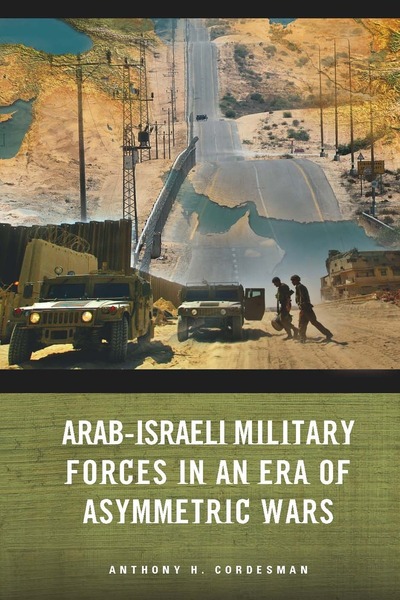 The reality of the Arab-Israeli balance now consists of two subordinate balances: Israel versus Syria and Israel versus the Palestinians. The book analyzes these two balances in detail and their impact on defense planning in each country and on the overall strategic risk to the region as a whole. It covers military developments in each of six states—Egypt, Israel, Jordan, Lebanon, Syria, and Palestine—and provides an analytical view with charts and tables of how the changing natures of the military and political threats faced by each is impacting its military force readiness and development. The book has the most comprehensive data on past, current, and future military force structure currently available, drawn from the widest range of sources. Responding to the most recent of events in the region, this book is the first to deal with the effects on the Arab-Israeli military balance of the strategic uncertainty created by the Iraqi insurgency and the Iranian nuclear program. It also studies how the Gaza pullout, the Syrian withdrawal from Lebanon, the changing political landscape in Israel, and the threat of nuclear proliferation are having impacts on the Egyptian-Israeli and Jordanian-Israeli peace accords and the prospects for a settlement between the Palestinians and Israelis. The roles of Hezbollah, Hamas, and Palestinian Islamic Jihad are analyzed in light of the changing political landscape in both Israel and Palestine. Given the role of Syria in the Palestinian-Israeli affairs, the book also explores the ways that internal instability in Lebanon could escalate into a regional conflict.

Anthony H. Cordesman holds the Arleigh A. Burke Chair in Strategy at the Center for Strategic and International Studies and is an analyst and commentator for ABC News. He has written extensively on energy and Middle East politics, economics, demographics, and security. He has served in a number of senior positions in the U.S. government, including the Department of Energy, and several assignments in the Middle East.

"This is a valuable reference book for those interested in the Arab-Israeli conflict."

"This book contains an exhaustive array of information and graphics on the quantities and types of weapons for ground, air, air defense, naval, and paramilitary forces as well as weapons of mass destruction capabilities in each of the actors at the core of the Arab-Israeli conflict. These actors are the nation-states of Israel, Egypt, Jordan, Syria, and Lebanon, as well as the Palestinians. The comprehensive order-of-battle information is complemented by rich qualitative analysis of the strengths and weaknesses of military and security forces in combat. The book is an important reference work for graduate students, scholars, and practitioners who study Middle East security issues. It is especially recommended for libraries intent on maintaining important reference volumes for the Middle East. Highly recommended. Graduate students, faculty, and practitioners."

"Anthony Cordesman here does what he does best. In his latest of a long series of books on the Middle East, he evaluates the military forces of Israel and its surrounding Arab neighbors with particular emphasis on unconventional warfare, or what is now called asymmetric warfare, meaning war where one side mingles with the civilian population causing moral confusion to the enemy. His book consists of an overview along with a segment for each of the countries involved. His findings are what most of us have already surmised: that in a conventional army-to-army war, Israel will triumph. He gives us detailed proof as to why, and as we learn more about their armies, we get a better understanding of each of the countries....Mr. Cordesman simply reports the facts with masses of corroborating detail and leaves moral judgments to others. We need not ask for more." 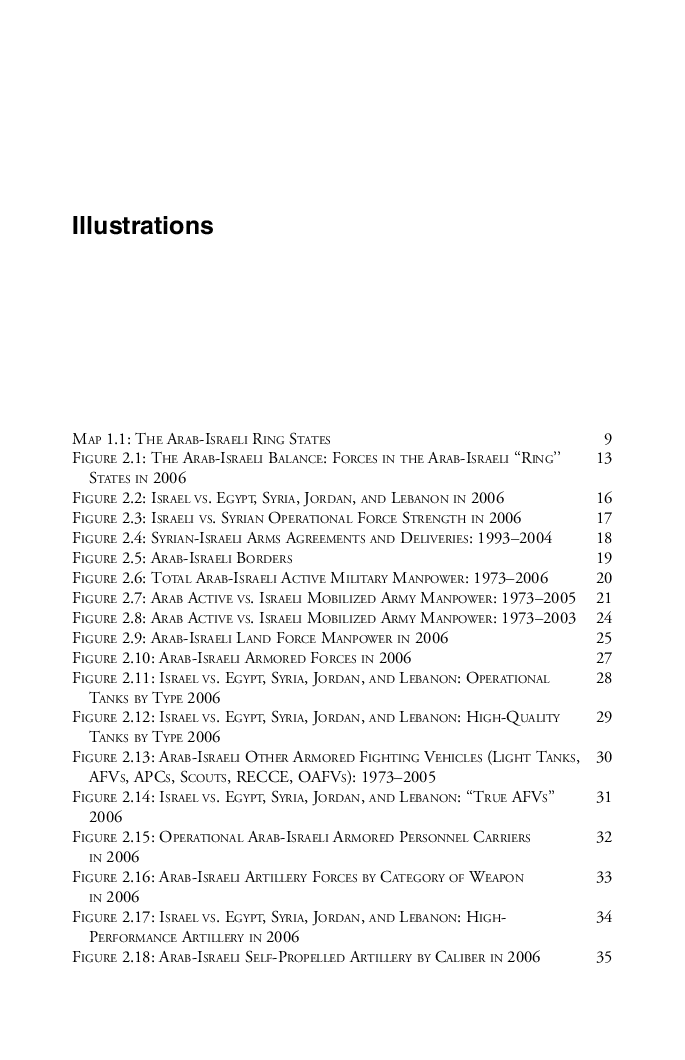 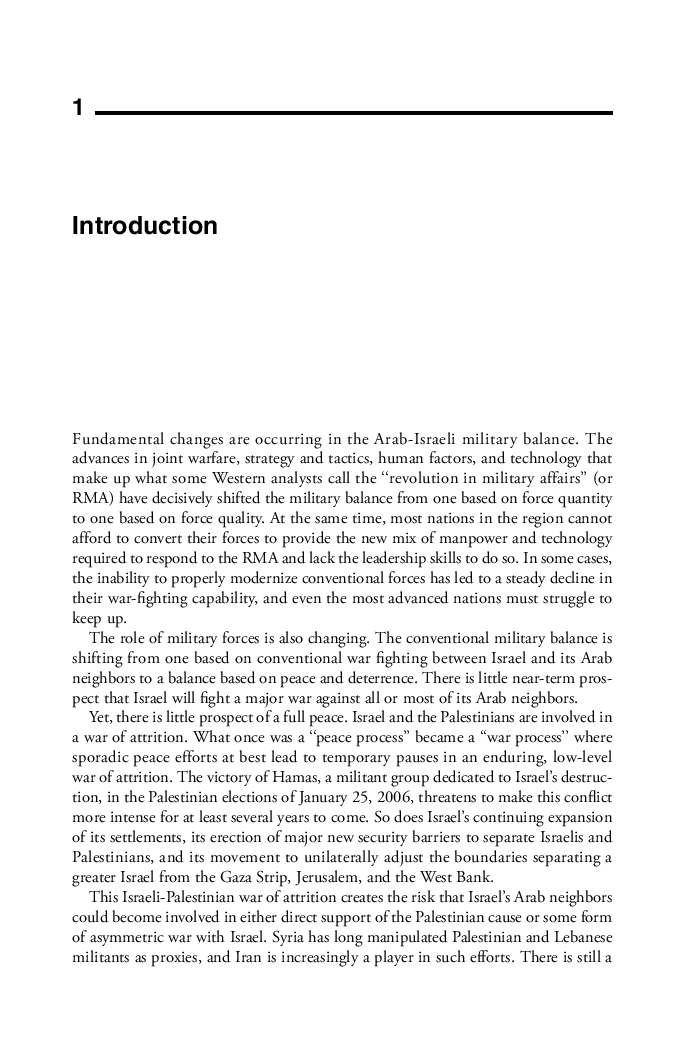 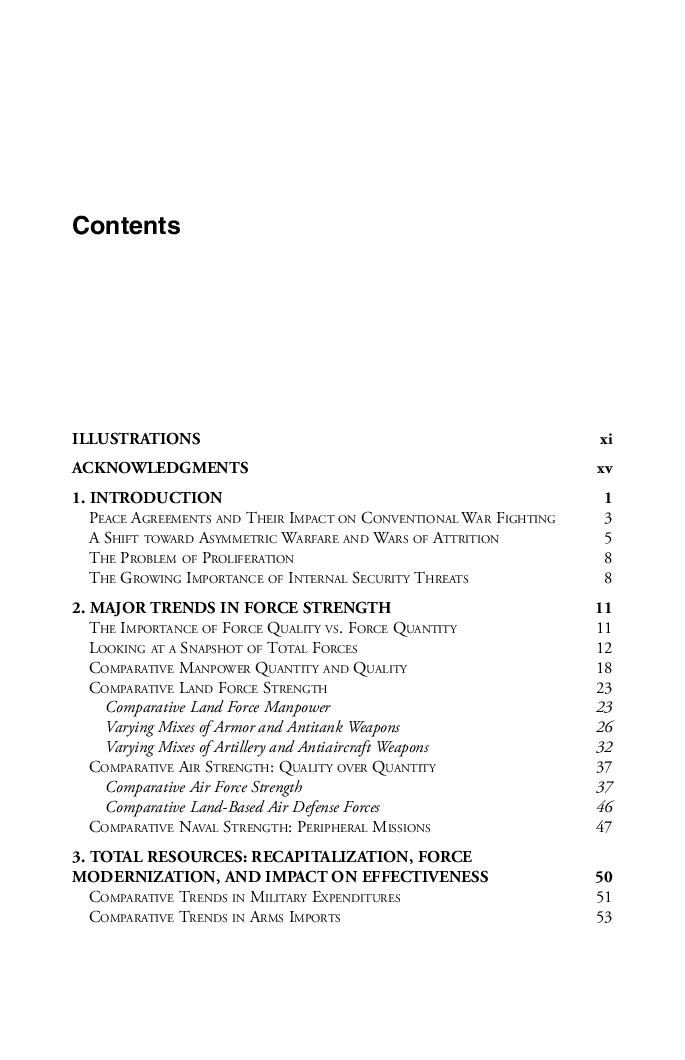