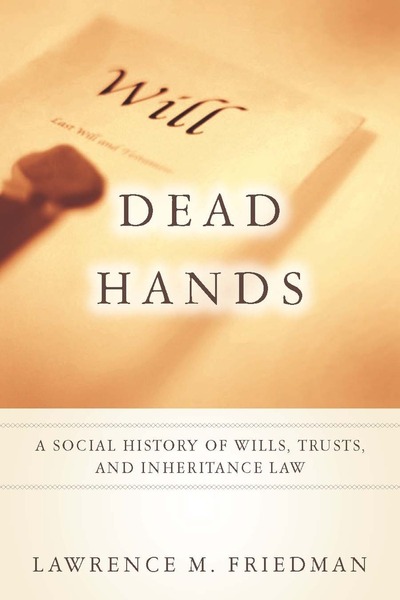 The law of succession rests on a single brute fact: you can't take it with you. The stock of wealth that turns over as people die is staggeringly large. In the United States alone, some $41 trillion will pass from the dead to the living in the first half of the 21st century. But the social impact of inheritance is more than a matter of money; it is also a matter of what money buys and brings about.

Law and custom allow people many ways to pass on their property. As Friedman's enlightening social history reveals, a decline in formal rules, the ascendancy of will substitutes over classic wills, social changes like the rise of the family of affection, changing ideas of acceptable heirs, and the potential disappearance of the estate tax all play a large role in the balance of wealth. Dead Hands uncovers the tremendous social and legal importance of this rite of passage, and how it reflects changing values and priorities in American families and society.

Lawrence M. Friedman is Marion Rice Kirkwood Professor of Law at Stanford Law School. His books include Guarding Life's Dark Secrets: Legal and Social Controls over Reputation, Propriety, and Privacy (Stanford, 2007), Private Lives: Families, Individuals, and the Law (2005), A History of American Law (2005, third edition), American Law in the Twentieth Century (2004), and Legal Culture in the Age of Globalization (Stanford, 2003).

"Lawrence Friedman has written an authoritative book .... Dead Hands, an always engaging, if occasionally problematic, social history of wills ... deeply research and well-written. It also offers a number of salutary reminders for anyone preparing documents that express a donor's wishes"

"Dead Hands is an uncommonly informative, consistently engrossing book that bespeaks much learning and thought. The book breaks new and important ground with its explanation of how social and economic forces have driven and continue to drive succession law in the United States."

"Dead Hands is important, and important to a surprisingly wide audience. It should be read by literally everyone interested in the policies that take effect after a person dies. From how estates are divided to the little understood death tax, Friedman explains this singular branch of the law clearly, and brings it to life by placing it firmly within its social context."

"Friedman gracefully shows why the law of succession matters. Instead of focusing on just one approach, Dead Hands incorporates law, sociology, and history to provide a wide-ranging and accessible guide for the curious reader."

"Friedman deftly weaves explanation of technical legal doctrines, case summaries, and description of the historical and sociological changes that have prompted reform of estates and trusts law."