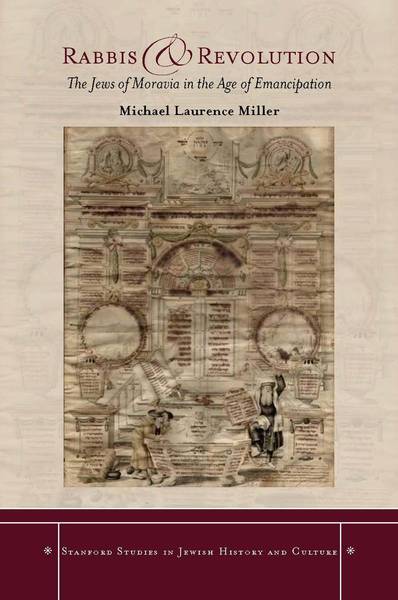 Rabbis and Revolution
The Jews of Moravia in the Age of Emancipation
Michael Laurence Miller
SERIES: Stanford Studies in Jewish History and Culture

The Habsburg province of Moravia straddled a complicated linguistic, cultural, and national space, where German, Slavic, and Jewish spheres overlapped, intermingled, and sometimes clashed. Situated in the heart of Central Europe, Moravia was exposed to major Jewish movements from the East and West, including Haskalah (Jewish enlightenment), Hasidism, and religious reform. Moravia's rooted and thriving rabbinic culture helped moderate these movements and, in the case of Hasidism, keep it at bay.

During the Revolution of 1848, Moravia's Jews took an active part in the prolonged and ultimately successful struggle for Jewish emancipation in the Habsburg lands. The revolution ushered in a new age of freedom, but it also precipitated demographic, financial, and social transformations, disrupting entrenched patterns that had characterized Moravian Jewish life since the Middle Ages. These changes emerged precisely when the Czech-German conflict began to dominate public life, throwing Moravia's Jews into the middle of the increasingly virulent nationality conflict. For some, a cautious embrace of Zionism represented a way out of this conflict, but it also represented a continuation of Moravian Jewry's distinctive role as mediator—and often tamer—of the major ideological movements that pervaded Central Europe in the Age of Emancipation.

"The book Rabbis and Revolution is revolutionary because Miller takes an innovative view in the study of Moravian Jewish history. He doesn't view the history of Moravian Jewry through the lens of individual Jewish communities, but tries to view it as a cohesive whole. . . . I believe that Czech historians will step forward, inspired by Miller's approach, and alongside describing the history of individual communities, will also examine phenomena that span all of these communities."

"The book certainly is the most coherent account of Jewish history in Moravia up to the second half of the nineteenth century . . . Miller's book is not only a milestone in the historiography of Jewish Moravia, but an important contribution to Central European or Habsburg Jewish history."

"It is a fascinating story, told by Miller with great erudition and much sympathy for the ability of Moravia's rabbinical leaders to steer their community through the shoals of modernization under conditions that combined great autonomy with the continuing oppressive burden of the Familiants Laws."

"Miller's dogged efforts to put Moravian Jewry on the map by drawing on an impressive array of archival sources and periodicals cannot be ignored. If we are left wondering at the enormous effort expended resurrecting such peripheral or ephemerally Moravian figures, Miller's rigorous scholarship does reveal Moravia as a major incubator of the rest of Central European Jewry's religious, scholarly, and educational leaders."

"Superb new book. . . [Miller] has produced a remarkably learned and lucid study that nimbly explicates just about every aspect of Moravian Jewry's terribly complicated history, tying together many of the loose parts left by earlier historians and providing readers with a wonderfully gratifying understanding of a community unlike any other."

"Michael Laurence Miller's excellent account of the transformation of the Jewish population of Moravia from its late medieval corporate structure to its partial integration into neo-absolutist and constitutional Austria is a tour de force on several levels. Written with verve, humor, and care, it provides crucial information that will go a long way toward filling gaps in a number of historical narratives. . . [B]ased on significant archival research in Austria, the Czech Republic (Brno and Prague), and Israel, as well as an impressive array of printed primary sources and secondary literature. . . Miller's narratives and analyses move effortlessly. . ."

"Michael L. Miller's synthesis crowns the many years of study into the history of Moravia's Jews undertaken by this experienced researcher in the field of Central and Eastern European Jewish history. For Miller dealt with this topic extremely well as a fully prepared expert able to meet all the necessary prerequisites for successfully carrying out such a task, including a knowledge of Hebrew and of the two languages spoken in Moravia, as well as good orientation in Moravia's archive network. Miller's work is characterized by an excellent heuristic approach, making ample use of the relevant archives in Moravia, Bohemia, Austria, USA and Israel and skillfully drawing on a broad range of contemporary Jewish and non-Jewish printed manner . . . [A] number of themes that are interpreted in Miller's book have not been dealt with before, and he has managed with great overview to place his topics within the broad context of the Bohemian lands, the Habsburg monarchy, and Central and Eastern Europe. In short, he has written a book that will undoubtedly become an excellent and indispensable basis for further research into the history of Moravia's Jews."

"In Rabbis and Revolution, Michael Miller vividly captures the experience of profound change that defined the era of emancipation in the history of central European Jewry . . . The thoroughness and expertise with which Miller handles his subject makes this an valuable contribution to the literature of Jewish emancipation . . . Throughout the text, Miller proves particularly adept at creating memorable vignettes to illustrate his points, bringing out the fault lines of communal conflict, painting intimate portraits of the chief rabbis along with their supporters and detractors, and explaining the nuances of numbers and subtle changes in policy. His storytelling reminds us of the ambiguities and uncertainties of the protracted process of emancipation, as if it were unfolding before our eyes . . . Miller should be commended . . . for penning an important, highly readable, comprehensive contribution to the fields of Modern Jewish and Central European History, that draws on his uniquely expert understanding of the lay of the land."

"In eight chapters, Miller covers the political, religious, and social events affecting Moravian Jewry in the mid-decades of the nineteenth century . . . Recommended for all academic libraries with a Jewish studies program."

"Rabbis and Revolution is a work of the highest order: thoroughly original, rigorously focused, exhaustively researched and finely crafted. This is the first synthetic study of Moravian Jewry as a whole, and Miller highlights how extensively it differed from the Jewries of other Hapsburg lands. His book is a singular scholarly achievement of value to historians of the Hapsburgs and their provincial Jewish communities." 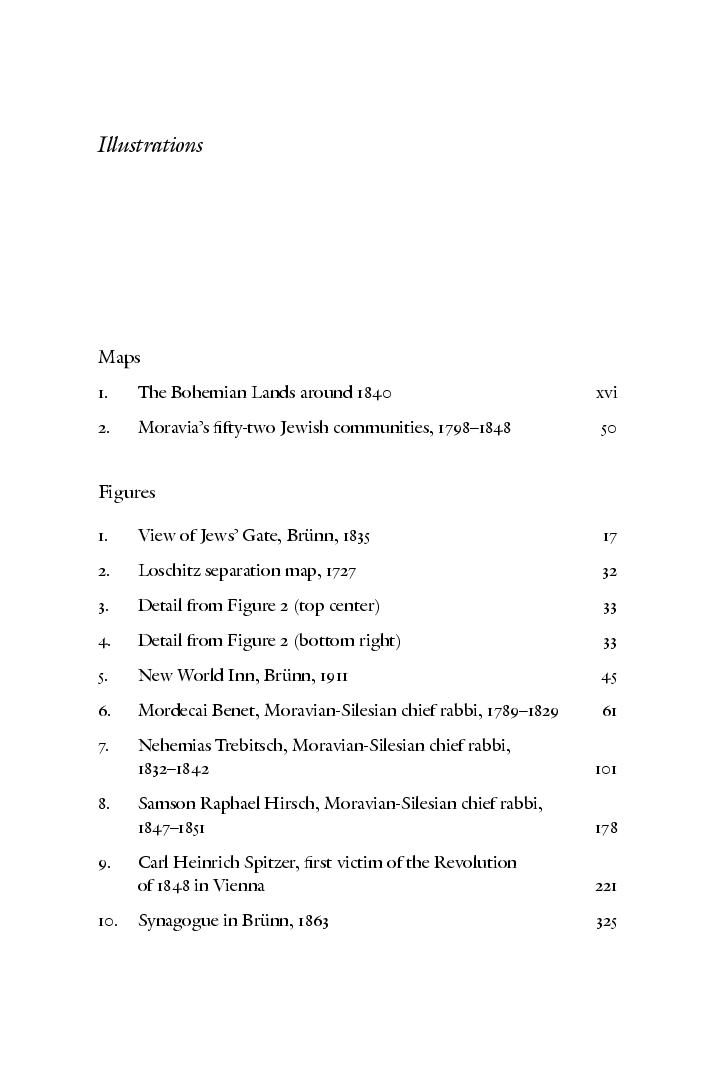 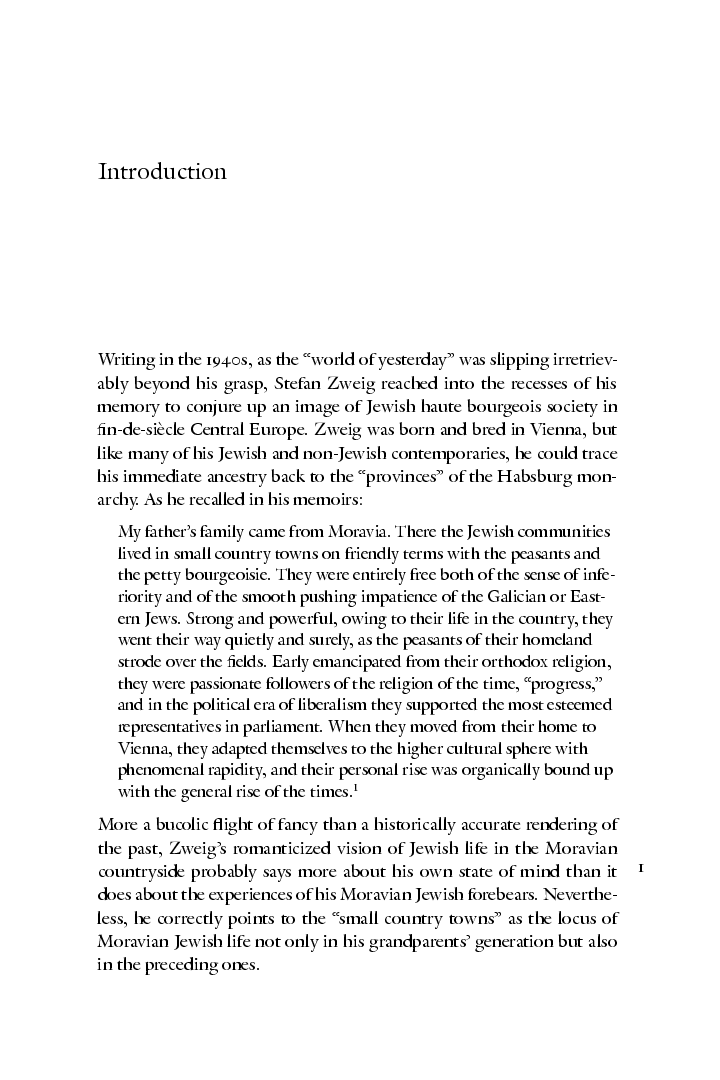 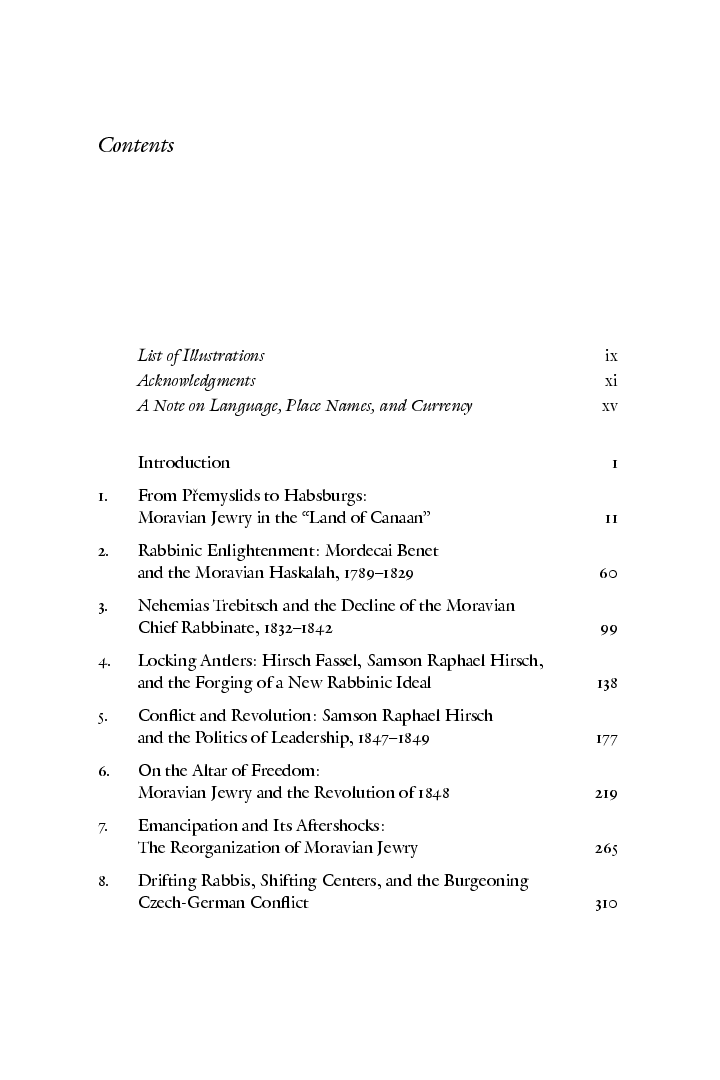