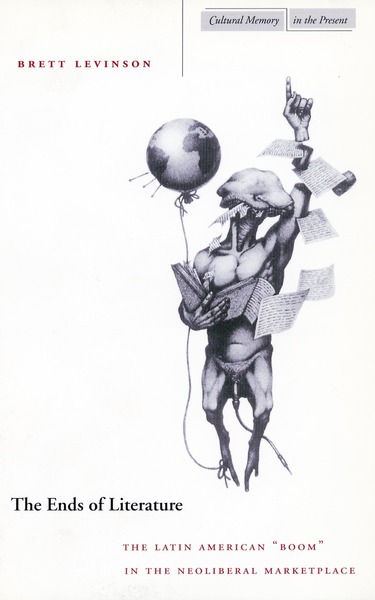 The Ends of Literature
The Latin American “Boom” in the Neoliberal Marketplace
Brett Levinson
SERIES: Cultural Memory in the Present

The Ends of Literature analyzes the part played by literature within contemporary Latin American thought and politics, above all the politics of neoliberalism. The "why?" of contemporary Latin American literature is the book's overarching concern. Its wide range includes close readings of the prose of Cortázar, Carpentier, Paz, Valenzuela, Piglia, and Las Casas; of the relationship of the "Boom" movement and its aftermath; of testimonial narrative; and of contemporary Chilean and Chicano film. The work also investigates in detail various theoretical projects as they intersect with and emerge from Latin American scholarship: cultural studies, deconstruction, psychoanalysis, and postcolonial studies.

Latin American literature, both as a vehicle of conservatism and as an agent of subversion, is bound from its inception to the rise of the state. Literature's nature, role, and status are therefore altered when the Latin American nation-state succumbs to the process of neoliberalism: as the "too-strong" state (dictatorship) yields to the "too-weak" state (the market), and as the various practices of civil society and public life are replaced by private or privatized endeavors.

Also key to the study is the notion of transition. Within much recent Latin American political discussion la transición refers to the passage from dictatorship to democracy, as well as to the failure of this shift, the failure of post-dictatorship. The author argues that the movement from literary to cultural studies, while issuing from intellectual and aesthetic circles, is an integral component of this same transition. The thematization of the bind between these two displacements—hence of Latin America's voyage into "post-transition"—forms a fundamental portion of the text.

Brett Levinson is Associate Professor of Comparative Literature at SUNY, Binghampton. He is the author of Secondary Moderns: Mimesis, History, and Revolution in Lezama Lima's "American Expression."

"This book will be recognized as one of the major works in Latin American literary and cultural studies of the last 20 years—an instant classic. It is masterfully concise, highly articulate, well written, and powerful as a theoretical statement. . . . It signals the beginning of a new paradigm of contemporary Latin American cultural production."