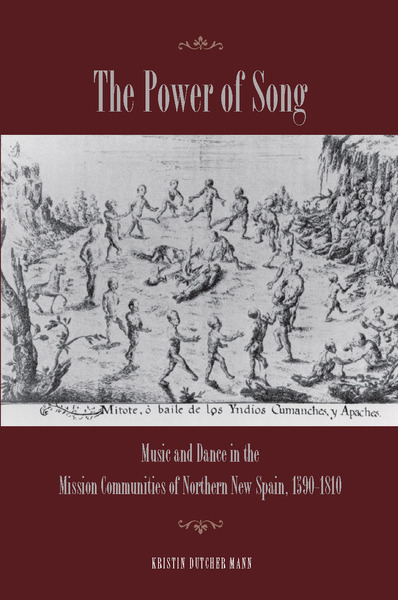 The Power of Song
Music and Dance in the Mission Communities of Northern New Spain, 1590-1810
Kristin Dutcher Mann

The Power of Song explores the music and dance of Franciscan and Jesuit mission communities throughout the entire northern frontier of New Spain. Its purpose is to examine the roles music played: in teaching, evangelization, celebration, and the formation of group identities. There is no other work which looks comprehensively at the music of this region and time period, or which utilizes music as a way to study the cultural interactions between Indians and missionaries.

Kristin Dutcher Mann is Associate Professor of History and Social Studies Education Coordinator at the University of Arkansas at Little Rock.

"In her logically organized and meticulously cited book, Mann sees music as a social practice that defines a group's collective identity, functions as an agent of social control, and operates as a language to communicate doctrine or abstract ideas."

"This work will first appeal to mission historians and musicologists. But it also makes a very significant wider contribution to the general study of the complex and dynamic relationship between colonizers and colonized in an important part of the Americas . . . This remarkable volume deserves a place on the bookshelf of anyone interested in the religious history of the United States or Mexico."

"Using music and dance as a lens through which to view the complex power relationships in Spanish missions, Kristin Dutcher Mann's book The Power of Song: Music and Dance in the Mission Communities of Northern New Spain, 1580-1810, adds depth to the literature of colonial rule."

"This study is a major contribution to an understanding of the colonial mission endeavor in northern New Spain . . . Written in a clear, engaging style and exemplifying the highest standards of scholarship, The Power of Song is an outstanding addition to the growing body of 'New Mission History' that is generating significant new perspectives on the complex intercultural interactions engendered by the European colonial enterprise."

"The Power of Song will prove to be a very useful book. Detailing as it does the European musical styles and rituals brought to New Spain, as well as their implementation by Franciscan and Jesuit missions, it may serve as an effective platform for reconstructing colonial period music and ritual of indigenous peoples. In this way, scholars can tease out native elements from European imports and thus recognize creative innovations as a response to encounters with other traditions."

"Overall, the book provides a careful and thorough examination of historical records from a large geographic and temporal span . . . [I]t extends northward the ethnohistorical work on missionization that recent decades have seen for more central areas of the Spanish empire, work that acknowledges the agency of the colonized and the limited and negotiated nature of colonial domination."

"A superb work, which will make a major contribution to understanding the religious and social role of music in the Catholic missions of Northern New Spain."

"An outstanding book on mission music in northern New Spain . . . Breaks new ground in its approach to the comparative study of music, ritual, liturgy, geography, and evangelization."