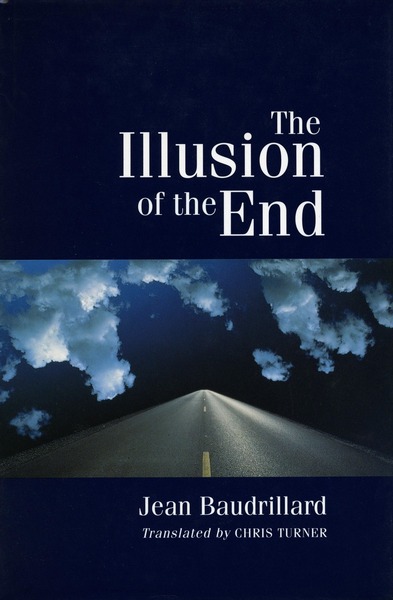 The Illusion of the End
Jean Baudrillard Translated by Chris Turner

The year 2000, the end of the millennium: is this anything other than a mirage, the illusion of an end, like so many other imaginary endpoints which have littered the path of history?

In this remarkable book Jean Baurdrillard—France's leading theorist of postmodernity—argues that the notion of the end is part of the fantasy of a linear history. Today we are not approaching the end of history but moving into reverse, into a process of systematic obliteration. We are wiping out the entire twentieth century, effacing all signs of the cold War one by one, perhaps even the signs of the First and Second World Wars and of the political and ideological revolutions of our time. In short, we are engaged in a gigantic process of historical revisionism, and we seem in a hurry to finish it before the end of the century, secretly hoping perhaps to be able to begin again from scratch.

Baudrillard explores the "fatal strategies of time" which shape our ways of thinking about history and its imaginary end. Ranging from the revolutions in Eastern Europe to the Gulf War, from the transformation of nature to the hyper-reality of the media, this postmodern mediation on modernity and its aftermath will be widely read.

Jean Baudrillard was born in Reims in 1929. He taught sociology at the University of Paris X (Nanterre). Among his works translated into English are In the Shadow of the Silent Majorities, Simulations and Simulacra, Fatal Strategies, Seduction, America, Cool Memories and The Transparency of Evil.

"Vintage Baudrillard—compelling, diabolically clever, outrageous, wounded, ironic, refreshing, and certainly controversial. It is a most original meditation on the theme of history, on its shape or trajectory, and the human fate bound up with it."

"There are three reasons for celebrating this translation. First, for the first time we are up to date with Baudrillard's ideas. Second, with the exception of Chapter 1, the material is new. . . . Third, the publishers have not added or omitted anything to the text in its translation. . . . Baudrillard weaves his argument as brilliantly as one has come to expect."

"Baudrillard theorizes poetically about cultural and political phenomena of the last ten years—the collapse of communism, the Gulf War, the globalization of culture, scientific experimentation with nature and human life. . . . He announces with panache and black humor . . . there is neither progress nor resolution, but an indefinite recurrence of old forms, recycled and illusory. Clever and erudite, good reading."