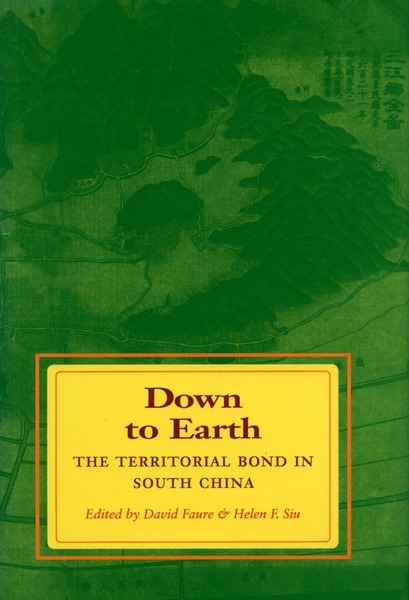 Down to Earth
The Territorial Bond in South China
Edited by David Faure and Helen F. Siu

Bringing local history to bear on major questions in Chinese social history and anthropology, this volume comprises a series of historical and ethnographic studies of the Pearl River Delta from late imperial times through the 1940's. The delta is a rich and socially complex area of south China, and the contributors - scholars from the People's Republic of China, Hong Kong, the United Kingdom, and the United States - have long-standing ties to the region.

The contributors argue that local society in the Delta was integrated into the Chinese state through a series of changes that involved constant redefinition of lineages, territories, and ethnic identities. The emergence of lineages in the Ming and Qing dynasties, the deployment of deities in local alliances, and the shrewd use of ethnic labels provided terms for a discourse that reified the criteria for membership in Chinese local society. The ideology produced by these developments continued to serve as the norm for the legitimization of power in local society through the Republican period.

In reconstructing the 'civilizing process' in the Delta, whereby local inhabitants, both elites and commoners, used symbolic and instrumental means to become part of Chinese culture and polity, the book confronts a central question in history and anthropology: How do we conceptualize the historical development of a state agrarian society with hierarchies of power and authority, attachment to which is both unifying and diversifying?

"[F]ascinating essays are integrated into a tightly woven volume by a set of common questions which are excellently discussed by the editors in their introduction and conclusion."

—Journal of the Royal Asiatic Society

"This is an important volume for Chinese studies and for social scientists interested in the ways in which constructions of kinship and descent can be used to legitimize claims to settlement, expropriation, and control."

"In yet another fine monograph focused on the history of lineage in South China, Faure shows that administrative transformation of county government and ritual reforms leading lineages to create family temples led to the emergence of lineage-centered society... A welcome addition to other pivotal studies on lineage."

"It is encouraging to read a work such as this one that incorporates solid contributions by scholars from different disciplines and from different parts of the world, including three researchers in mainland China."

"The title of this book is very astute... the book is down to earth in that is stays away from rarefied generalisations about Chinese society, and instead takes us deep into the complexity and richness of the history of one region of China, the Pearl River Delta."

"One of the main aims of this book, as stated by the editors, is to integrate history and anthropology by means of a common agenda. I believe this aim has been achieved."