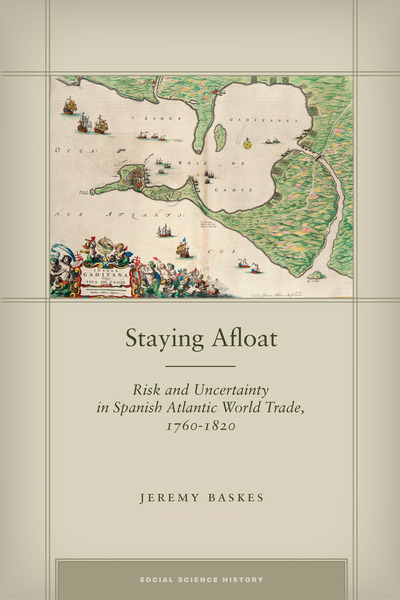 Early modern, long-distance trade was fraught with risk and uncertainty, driving merchants to seek means (that is, institutions) to reduce them. In the traditional historiography on Spanish colonial trade, the role of risk is largely ignored. Instead, the guild merchants are depicted as anti-competitive monopolists who manipulated markets and exploited colonial consumers. Jeremy Baskes argues that much of the commercial behavior interpreted by modern historians as predatory was instead designed to reduce the uncertainty and risk of Atlantic world trade.

This book discusses topics from the development and use of maritime insurance in eighteenth- century Spain to the commercial strategies of Spanish merchants; the traditionally misunderstood effects of the 1778 promulgation of "comercio libre," and the financial chaos and bankruptcies that ensued; the economic rationale for the Spanish flotillas; and the impact of war and privateering on commerce and business decisions. By elevating risk to the center of focus, this multifaceted study makes a number of revisionist contributions to the late colonial economic history of the Spanish empire.

Jeremy Baskes is Professor of History and Director of Latin American Studies at Ohio Wesleyan University. He is the author of Indians, Merchants, and Markets: A Reinterpretation of the Repartimiento and Spanish-Indian Economic Relations in Late Colonial Oaxaca, 1750-1821 (Stanford, 2000).

"In this important new book, Jeremy Baskes uses a wide range of recent scholarship, as well as his own extensive archival research, to challenge virtually all of the standard issues . . . [This] provocative and well-documented study helps to explain how Spain's complex colonial trade actually functioned, rather than relying on antiquated generalizations."

"This is an original study that makes good use of the relatively underutilized documentation of Seville's rich Archivo de Indias. It is provocatively revisionist about the Spanish 'flota' system, provides fascinating evidence on the variety of methods adapted by merchants to reduce commercial risk, and finishes, as noted, by successfully placing the Spanish Atlantic story within the broader narrative of European and Atlantic history."

"Straddling the tightly regulated era of Spanish colonial shipping before 1778 and the free-trade era thereafter, Staying Afloat offers a nuanced analysis of commercial risks during war and peace years and of mercantile strategies for coping with uncertainties . . . [Staying Afloat] is a notable study of risk management in oceanic trade. Baskes' book deserves careful reading not just by scholars of Spain's colonial empire but by specialists in the business and economic history of European transatlantic trade during the eighteenth and early nineteenth centuries."

"Jeremy Baskes has produced an intriguing and important book about eighteenth-century transatlantic trade . . . The width and depth of Baskes's research is admirable. He draws on a wealth of sources including books and articles by economists, economic historians, and historians of trade, empires, and commercial networks, as well as the correspondence of several merchants, consular records, insurance policies, and company statutes . . . Baskes has produced a highly readable, indeed enjoyable, economic history that should make historians reconsider some long-held views on eighteenth-century commerce."

"This book is a very welcome addition to the growing literature on risk management, trust, reputation, uncertainty, and trade networks during the eighteenth-century Spanish Atlantic trade . . . [T]his is a fine book, a must-read for anyone interested in eighteenth-century Atlantic trade and in long-distance trade before the transport and communications revolutions that transformed the nature of trade from the second half of the nineteenth century onwards."

"This book presents a thorough, interesting, and highly readable account of how Spanish traders managed risk during a period of intense institutional change. It reveals a great deal about the mercantile class, and is a substantial addition to the literature on the economics of Spanish colonialism."

"Staying Afloat makes substantial contributions to the growing historiography on Spanish colonial trade by focusing on the role of risk, and it clearly merits attention from scholars of Spanish colonialism and economic history. The material presented is also accessible to non-specialists and would certainly be appropriate for assignment in an upper-division undergraduate course."

"Baskes's work is an excellent primer to the structure of Spanish merchant finance, credit, and behavior....Staying Afloat offers a truly transatlantic interpretation of what made the late imperial Spanish commercial system tick."

Appendix A
Appendix B
Appendix C 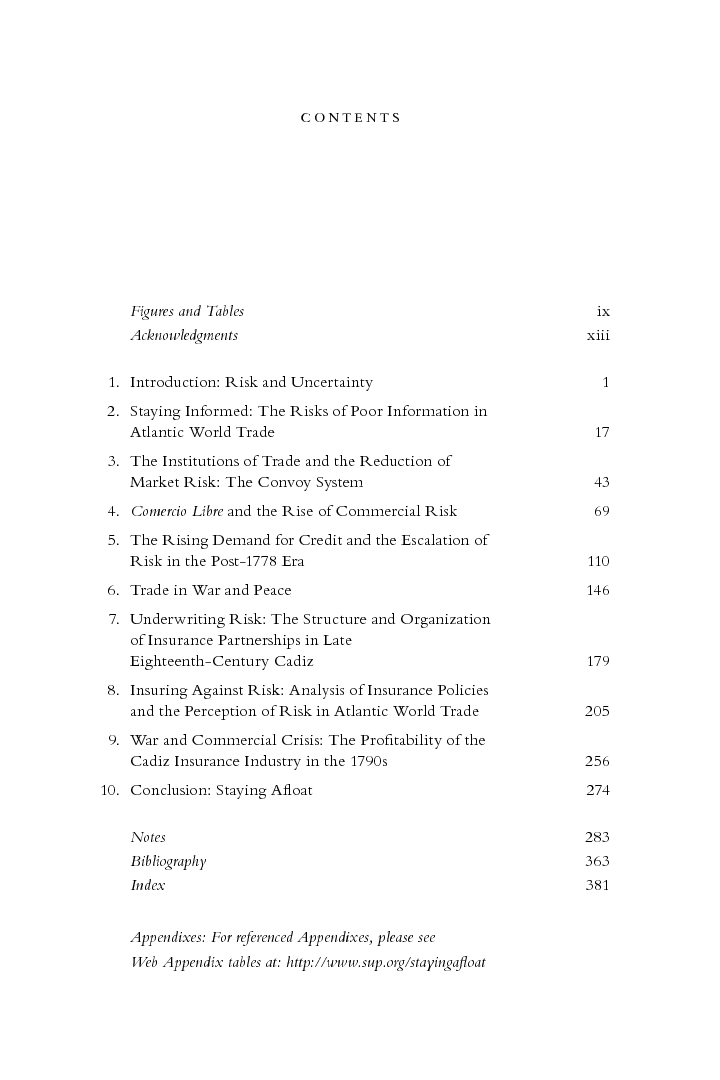 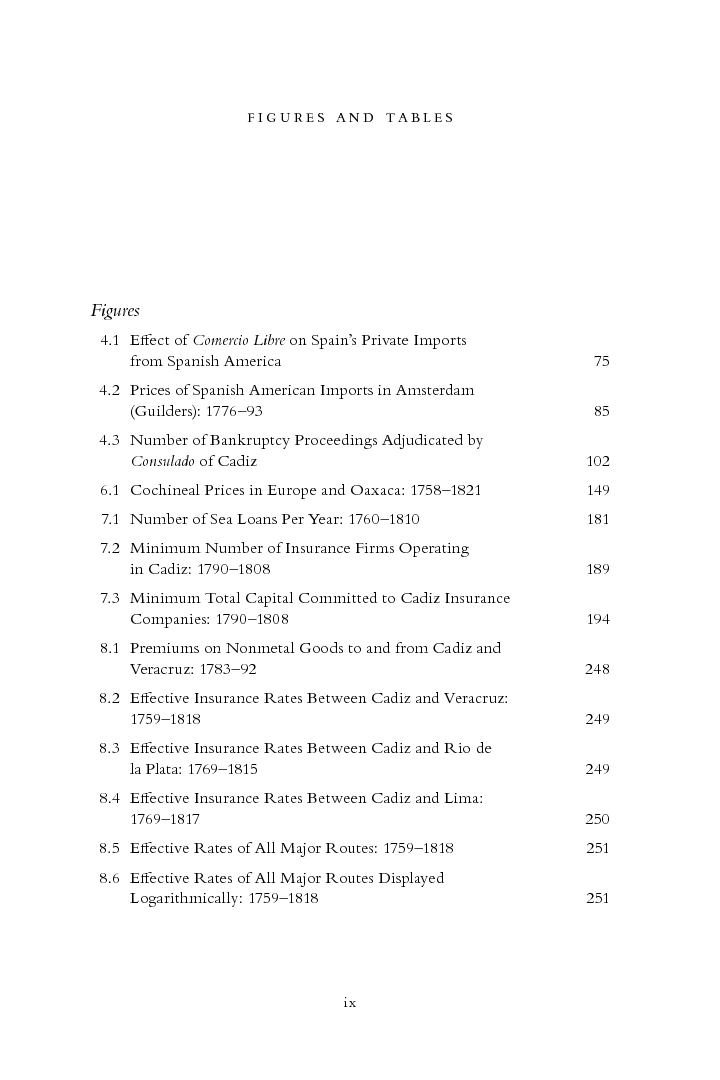 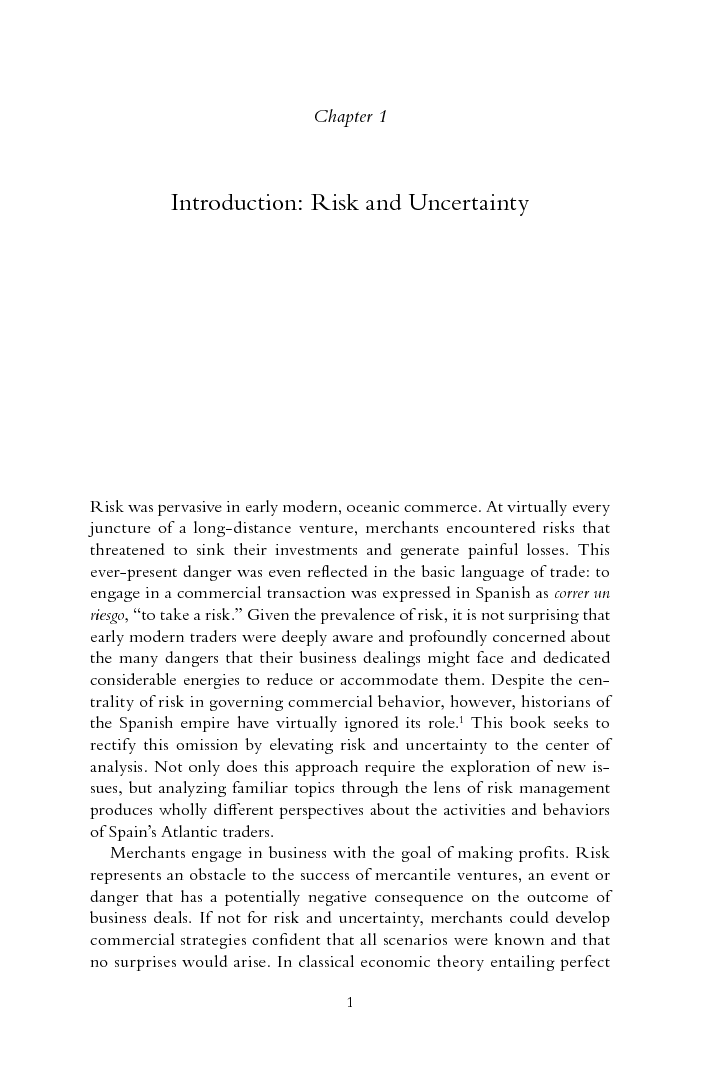