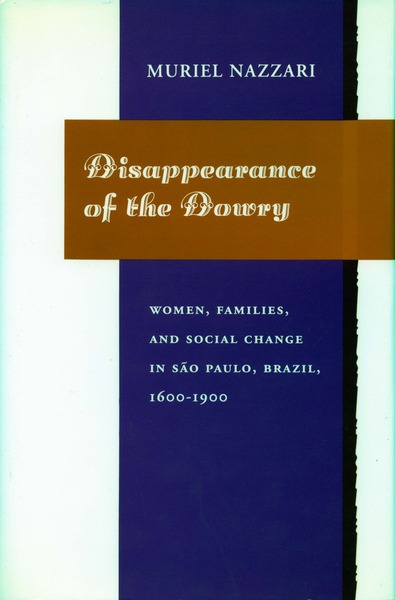 Why did a practice that had been considered a duty stop being a duty, or, conversely, why did daughters lose the right they had previously enjoyed of receiving from their parents the wherewithal to contribute to the support of their marriage? Despite the many historical and anthropological studies about dowry, to the best of my knowledge this is the first analysis of its disappearance. My hypothesis at a general level is that the institution of dowry was among the many fetters to the development of capitalism, such as entail, monopolies, and the privileges of the nobility, of churchmen, and of army officers, that disappeared as the influence of industrial capital spread worldwide. Yet entail, monopolies, and privileges were abolished legally, whereas the dowry was not abolished legally, it disappeared in practice. Thus the question remains: what led individual families to change their customs regarding dowry?

And they changed remarkably. I found that, in the seventeenth century, practically all propertied families in São Paulo endowed every one of their daughters, favoring them by giving dowries far exceeding the value of what their brothers would inherit later on. By the early nineteenth century, in contrast, long before the custom of dowry had disappeared, less than a third of the propertied families in São Paulo were endowing their daughters, and those who did gave comparatively smaller dowries, with a very different content, while some families endowed only one or two of several daughters.

How to explain this transformation in customs? I will argue throughout this book that the practice of dowry altered because of changes in society, the family, and marriage. Since dowry is a transfer of property between family members, changes in the concept of property, in the way property is acquired and held, or in business practices are relevant to an understanding of change in the institution of dowry, as are changes in the function of the family in society, the way it is integrated into production, and how it supports its members.

The changes experienced by Brazilian society that help explain the decline and disappearance of the dowry are many of the same transformations that have been observed in more central regions of the Western world. Through a long process that started in the eighteenth century and continued into the early twentieth century, Brazil changed from a hierarchical, ancien régime type of society in which status, family, and patron-client relations were primary to a more individualistic society in which contract and the market increasingly reigned. A society divided vertically into family clans changed gradually into a society divided horizontally into classes. As the state grew stronger, it took over functions previously performed by the family, which in seventeenth-century São Paulo's frontier society had included municipal government and defense.

Between the seventeenth and the late nineteenth centuries, a new concept of private property developed. The family changed from being the locus of both production and consumption to being principally the locus of consumption, while "family" and "business" became formally separate. The power of the larger kin declined and the conjugal family became more important, and marriage was transformed from predominantly a property matter to an avowed "love" relationship, the economic underpinnings of which were no longer made explicit. At the same time there was a change from the strong authority of the patriarch over adult sons and daughters to their greater independence, and from arranged marriages to marriages freely chosen by the bride and groom. These transformations took place in Brazil starting in the eighteenth century and continuing throughout the nineteenth century in a gradual and complex manner so that both old and new characteristics often coexisted at a given time, sometimes even within the same family. As these changes occurred, the practice of dowry altered. This book traces the transformation in São Paulo and attempts to answer how alterations in family practice were connected to broader social changes. Why did property-owning families modify their behavior regarding sons and daughters? And what were the consequences for the women of these families?

“This detailed methodologically precise examination of dowry over 300 years of Brazilian history. . . . It will become indespensable for all scholars and students of Latin American history.”—Linda Lewin, University of California, Berkeley