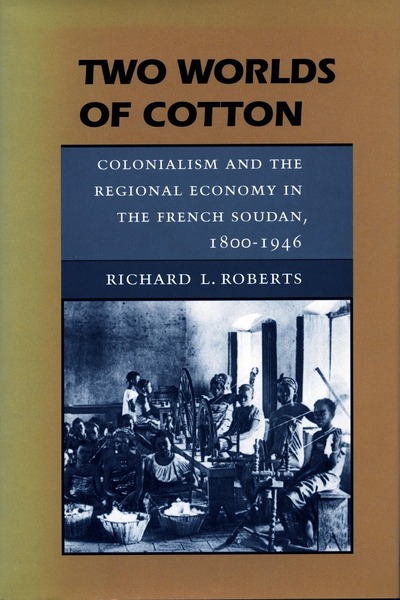 Two Worlds of Cotton
Colonialism and the Regional Economy in the French Soudan, 1800-1946
Richard L. Roberts

A major new approach to the study of the social and economic history of colonial French West Africa, this book traces French efforts to establish a cotton export economy in the French Soudan from the early nineteenth century through the end of World War II.

Cotton cultivation and handicraft cotton textile production had long been an important part of the indigenous regional economies of West Africa. During the nineteenth century, the French metropolitan cotton textile industry developed and expanded, and securing new sources for raw cotton became a central concern for French industrialists and the emerging technocratic leadership of the French state. Controlling the French West Africa cotton harvest thus became of paramount importance to the French colonial endeavor.

Richard L. Roberts is Professor of History at Stanford University. He is the author of Warriors, Merchants, and Slaves: The State and the Economy in the Middle Niger Valley, 1700-1914 (Stanford, 1987).