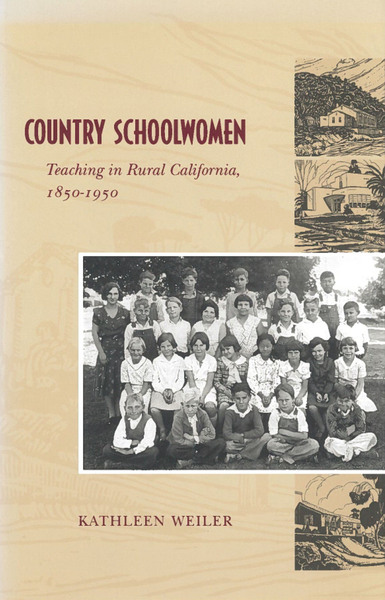 Focusing on the lives and work of women teachers in two rural California counties from 1850 to 1950, Country Schoolwomen explores the social context of teaching, seeking to understand what teaching meant to women teachers, what it provided them, and how it shaped their categories of experience.

The women we meet in this study taught in isolated one- and two-room schoolhouses and in the migrant schools of the Depression years; many of them witnessed the profound upheavals brought about by the two world wars. Through the lens of their lives, the author examines the growth of state control over schools, the irrevocable impact of powerful economic and political changes on small-town life, and the patterns of racism that have divided California from the time of the earliest European settlement.

This study challenges a number of assumptions about the lives and work of women teachers. It is often assumed, for example, that the work of women in schools has always been controlled by men—that education has, with rare exceptions, remained a patriarchal space in which women care for children in classrooms while men hold positions of authority, define issues, and set policy. Country Schoolwomen introduces us to a network of women educators who occupied positions of power at the state level, who supported one another, and who defined an alternative, far more positive image of the woman teacher. The work of these women put forth a vision of classroom teaching as a serious and stimulating profession. And for many of the women in this study, teaching clearly did provide material resources and intellectual satisfaction.

The historical record thus suggests that rather than signaling their subjugation, teaching has afforded women a potential source of power; it has offered them respect, autonomy, and financial independence. But women have had to struggle—not always successfully—to claim this potential, which male educators have often sought to deny or disregard. In addition, both university experts and local communities have persisted in viewing classroom teaching as "women's work" and have consequently been slow to acknowledge competing perspectives on the profession. This study ultimately reveals, then, not a homogeneous tradition but a dense ideological landscape, one in which representations of "the woman teacher" were often caught among contradictory and contested visions.

Kathleen Weiler is Associate Professor of Education at Tufts University. She is the author of Women Teaching for Change.

"A fascinating history of rural women teachers in California. Her major achievement is to successfully integrate genres that are too often separated: critical and feminist theory, life histories, the political economy of schooling, quantitative demography, and institutional history."

Country Schoolwomen is feminist scholarship at its best..."